FS, are you fixing the OE patch's numerous bugs before Chaos Wastes?

Because your nearly total silence on both of those topics for the past month and a half is giving me the impression you’re planning to just leave them for the expansnion patch. I hope that’s not the case. If you intend to leave the game in a semi-broken state for several more weeks or months, maybe at the very least some sort of apology is in order?

What’s your goal with this question?

Thats the usual for Perteks, best to just ignore him.

I have to admit, the state of the game since engineer’s release has surprised me in a negative way (especially the network changes) and the release of CW needs to be way better than that. Regardless of how CW itself turns out, the base game experience shouldn’t be harmed by the patch that comes along with it.
Please also give the modders some kind of sizable headstart so it won’t take another 2 weeks of crashes and issues to return to normal. 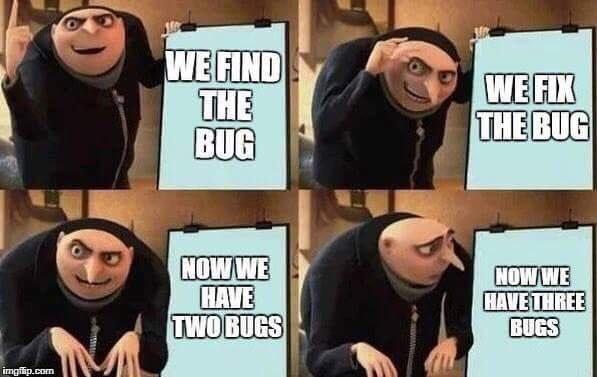 Bugs get fixed by Mitosis.

What’s your goal with this question?

It’s a fair question to be fair. Any bug that’s reported here in the forums, or steam, or helpdesk, is raised in a bug tracker which the developers work through on a priority basis. If they’re not reported via those channels, they’re not fixed unless they’re found internally.

It’s a fair question to be fair.

No, Hedge, let us be fair - it is a loaded question made in response to a loaded opening post. Also answering a question with a question is considered impolite in some cultures. Thanks for the answer though.

I’m sure if the types of @Harridas and @Romucha dug their topics up, this ‘fair’ question of @Perteks’s would get buried rather quickly.

there’s numerous bugs which also get claimed to have been fixed yet remain active such as the current hookrat animation bug.

Also yeah Perteks is definitely trolling with his question. Not the first time, probably won’t be the last lol

Also yeah Perteks is definitely trolling with his question. Not the first time, probably won’t be the last lol

Depends on definition of trolling, from my seat it looks more like he´s not intentionally trying to mess things up as a troll would but…well he is undeniably being an elitist or at least rude about it.

What Perteks effectively did was imply that to have the right to complain about the large number of bugs that dont get fixed/take ages to get fixed you must have a record of reporting bugs which is just being…as mentioned above.

By itself it is a fair question, but not in this context.

By asking the question in response to OP´s question Perteks is effectively stating that OP lacks the qualification to complain about the large number of bugs since OP doesnt seem to have reported a lot or any of them.
’
Which is being elitist and rather condescending.

Well at least according to my knowledge of English, i could be wrong but i think it´s undeniable that Perteks could have worded it better to make it less…provoking.

Which could be almost a year from now lol.

Let me congratulate you on the past holidays, and express my love, admiration and respect for your hard work.

There are two things that I have been trying to draw your attention to for a long time. They influence my game by a negative and constant way:

Fix it, please. I believe in you!

You need to chill boi.

They are not robots.

I dont see any report from him on bug section, so I see this is as crying thread

He didnt even specifed what kind of bugs

Yes. I was 100% aware what Pertek’s intent was. I just preferred he be made to say it instead of me responding to the obvious implication and having him feign outrage about me jumping to conclusions.

That Hedge is defending him and his clumsy attempt to attack my credibility… it makes me just want to stop coming here, not bother trying to interact with Fatshark again. That FS enable and encourage anti-criticism posters like Perteks and Froh is just pathetic.

That Hedge is defending him and his clumsy attempt to attack my credibility… it makes me just want to stop coming here, not bother trying to interact with Fatshark again. That FS enable and encourage anti-criticism posters like Perteks and Froh is just pathetic.

I don’t think that’s what Hedge meant, you have to remember it’s not like Hedge is going in to the code and fixing these bugs. The community managers do a great job here as far as I’m concerned, but what more can they do then raise these reports internally and hope they get worked on?