This change from Patch 3.3 looks good:

Bots should now replenish ammo from Ammo Boxes with much more consistency.

But in practice, this change almost ruins the game. Here are the problems I encountered:

Moreover, they do it chaotically, irrationally, not paying attention to the current state of ammunition for themselves, other bots and even a living player.
On difficulties, where ammo are rare, this is simply wasteful - doubly wasteful in the combination with the habit of bots of wasting shots on useless targets, ignoring important ones.

In fact: This bot behavior is very similar to that of new players. if this is a way to equalize them then it’s a bad joke.

#2 Bots constantly want to replenish their shots from ammo box.

2.1 If ammo box is nearby: bots constantly run to the box after each shot, sometimes going back a lot, not holding a position next to a live player, getting into many troubles.

2.2 Even worse, if the box with ammo is nearby, but it is impossible to reach (for example, jumping down and leaving the ammo box behind) - the bots do not move at all, freezing just like waiting for the item to teleport to them. Obviously, this script is more important than the others, so the bots can stand still even in a gas cloud. Sometimes they just stand still, ignore enemies, miss blows often, and as result die quickly.

This often leads to their death, especially in the boss arena. Or final event of ‘A Quiet Drink’ map.

Resume: I think this change is more bad than good. Before that, I had no such problems.
In fact, giving orders to bots manually to pick up ammo is not at all tiring for solo player, the main thing is that there was control, now it is lost. It’s not good, either, when bots are distracted by outside actions in the heat of battle.

I definitely welcome all the improvements for game with bots, but this change should simply be reversed. Or set up exceptions.

I think the change was to help improve bots to pick up ammo from ammo boxes they had trouble reaching.

Like the ammo box hanging on a platform in Righteous Stand. For whatever reason, bots could NEVER pick up ammo from that particular box.

I had no idea they are now scripted to pick up ammo pouches and continually run to ammo boxes after each shot. This is a good find!

Quite the opposite: this change was made in response to complaints that bots rarely take ammo from ammo boxes. And it’s “oh, how tough and boring” to use the Social Wheel and order the bots to take those ammo. (Against stupidity the gods themselves сontend in vain ©)

I also checked right now - bots STILL ignore this box and do not take anything by themselves, not by order. 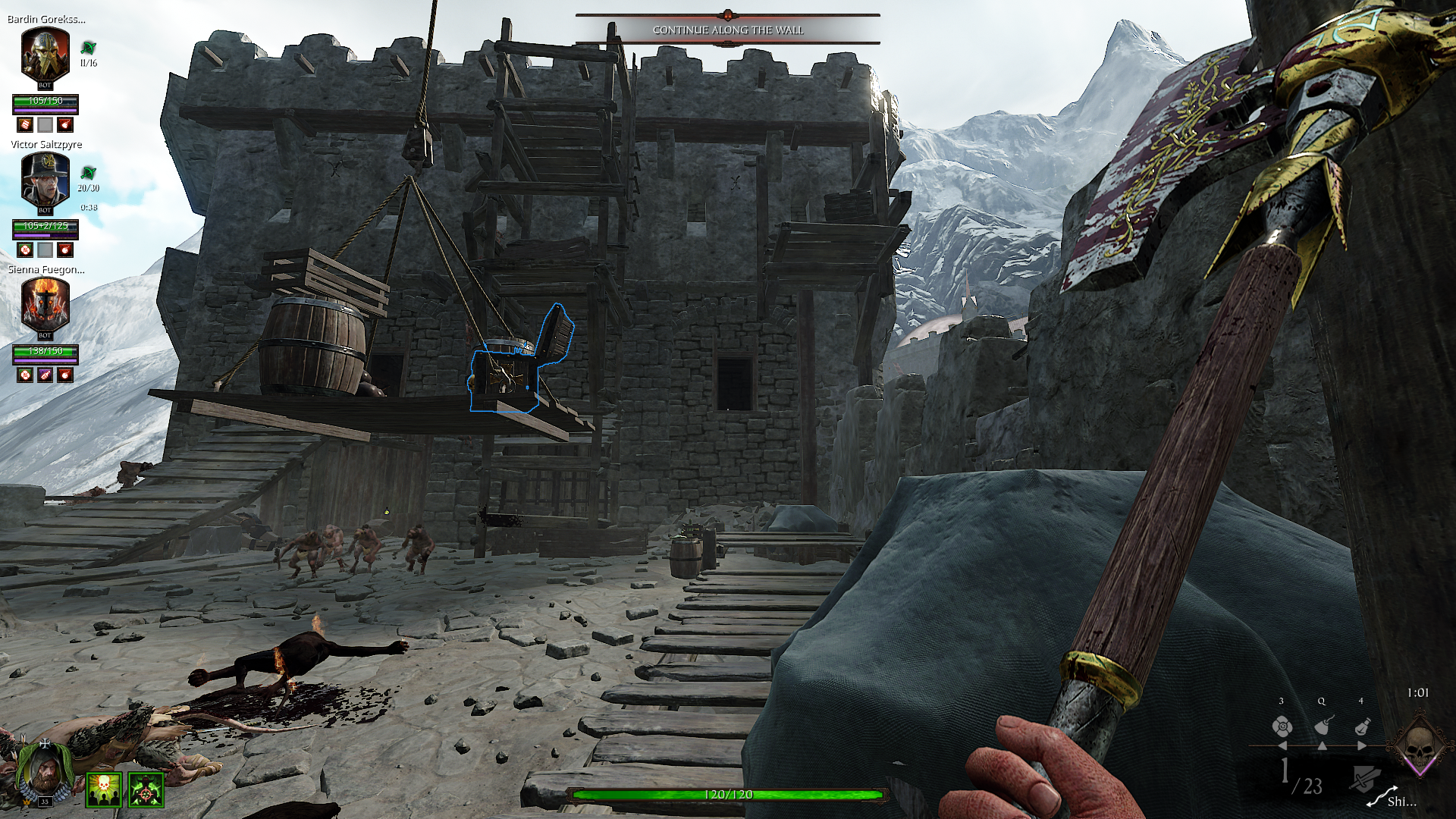 So when I said, “the box is nearby, but inaccessible,” I meant - left behind when team jumped down, for example.

It is in this case that bots, having a desire to take ammo from such a box, “stick”. To solve this problems, I would ask the Developers to fix or completely remove this change, it would be better.

Well, that is just plain stupid.

It takes like 5 seconds to order bots with chat wheel to command them to pick up ammo.

Yeah, I like the idea behind the change, it just needs some tweaks.

The way I see it, bots should only grab an ammo bag if they have the lowest ammo. If it’s a bardin ammo bag, they can grab it if they are missing more than 10% ammo. Also pathing to ammo should be no different than pathing to the player but bots seem to ignore threats and head for ammo on their own. Worst offender in my experience is the box right before the open graveyard on garden of morr, they DON’T grab the ammo and just let things hit them.

Worst offender in my experience is the box right before the open graveyard on garden of morr, they DON’T grab the ammo and just let things hit them.

In fact, this happens all the time - because ammo boxes are random and can be anywhere. Here is an example of where bots still freeze, don’t take ammo and don’t move on: 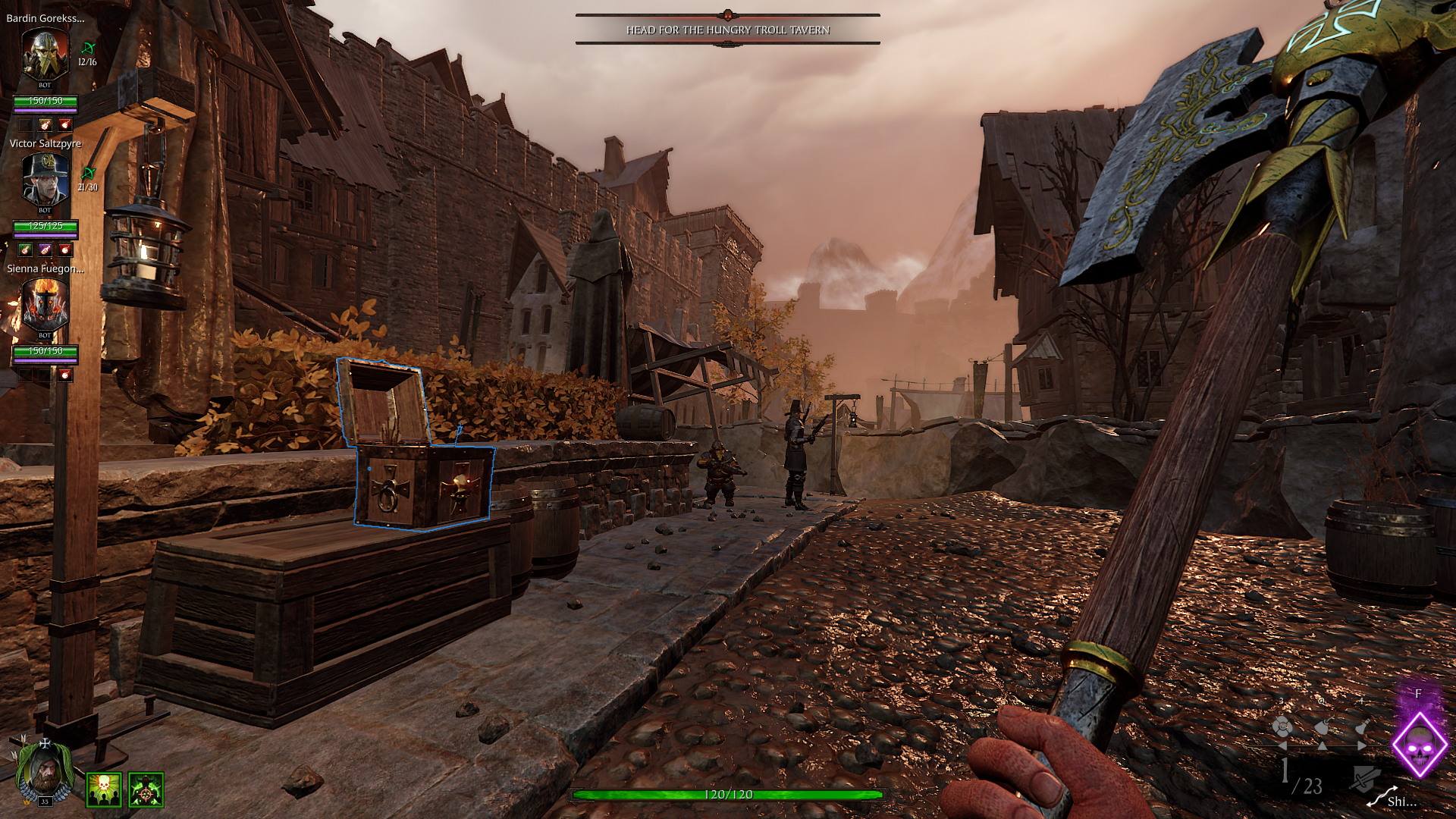 Or, if we are talking about the Garden of Morr. Most terrible random ammo box is here: 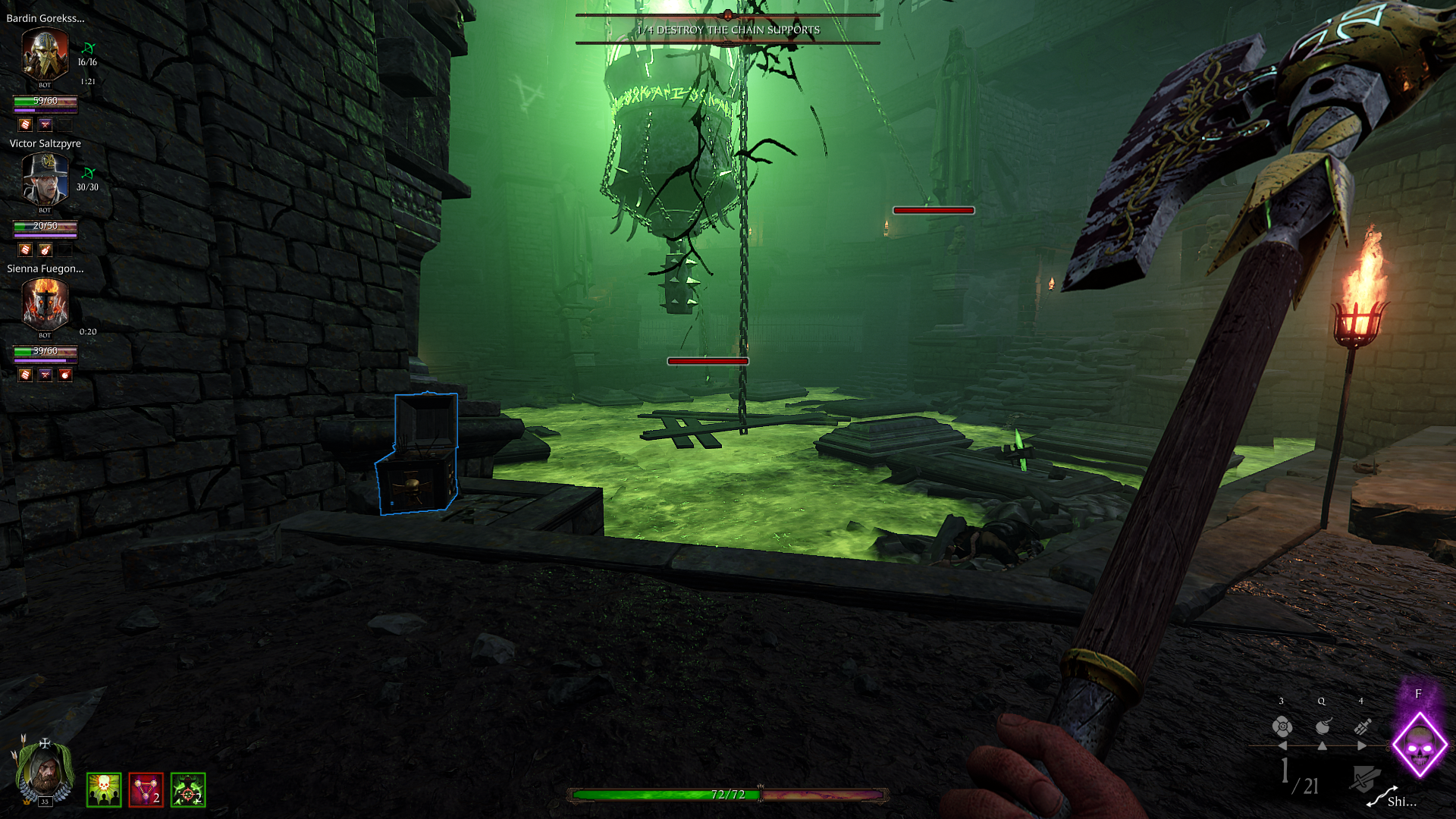 Because bots will run FOR EVERY shot THERE and BACK through the poisoned water. Also getting stuck in a ladder.

@Ghoth1ckov1tch Now that you’ve mentioned it, bots do have issues with picking up ammo from ammo boxes that are essentially on top of an object or suspended in the air.

I wonder what is actually causing that.