There are absolutely plenty of concerns that deserve actual responses.

Nobody likes the disgustingly RNG-ized shops?

I want to know where the hell the missing weapons are. It’s been around 24 hours with no official statement.

Hedge responded regarding the unheard of concept of “paying a direct 1 to 1 cost on what you want” revolutionary concept really.

r/DarkTide - For people wondering, they hope to add a “buy what you need” button... 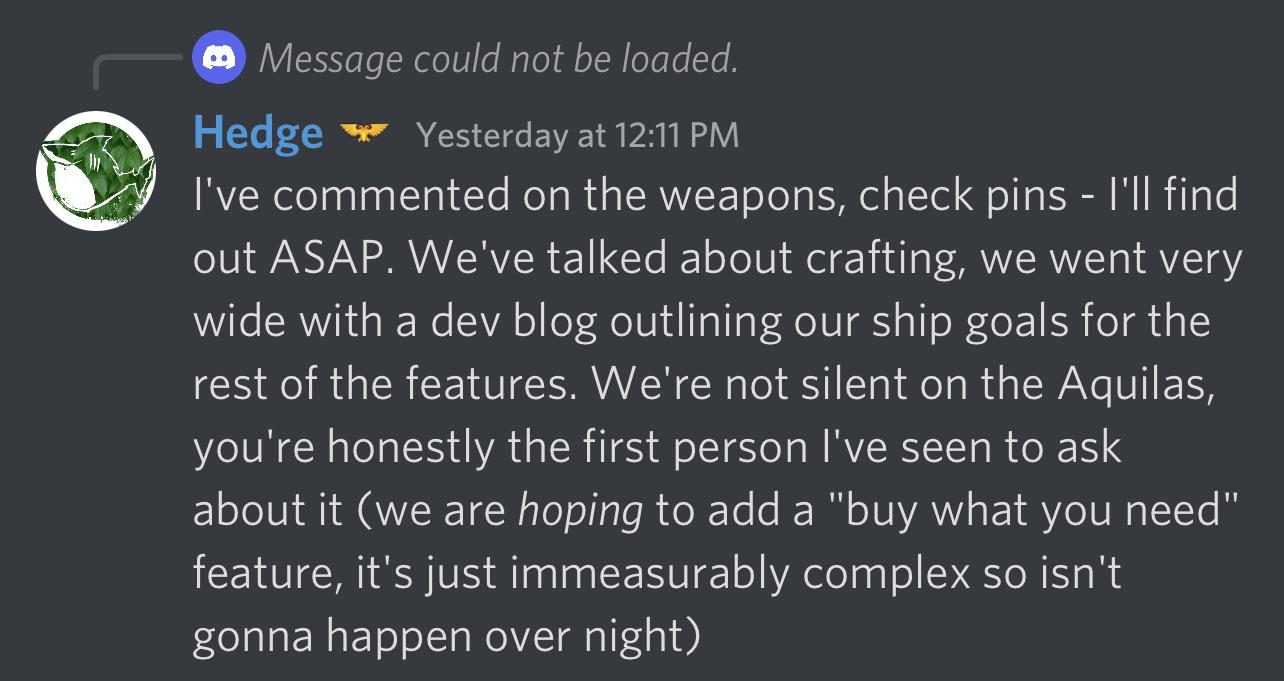 To be fair, I think what Hedge means, and this isn’t much better, is that there is likely a lot of red tape that they tangled themselves up in

Doesn’t excuse the anti-consumer practices that are implemented however

it’s the same that said, changing height or voice or name it’s not possible because of technical reasons

when people because of a bug, had their voice type changed for no reasons. (for ogryns)

of course, changing the height, name, and voicetype is very possible, but somehow they don’t want.

pretty much they hate the community for real, showing their disrespect with the slowmode in their discord.

Nobody likes the disgustingly RNG-ized shops?

Always a problem when you assume to speak for anyone but yourself. I’m not a huge fan, but I don’t think it’s any worse than VT loot boxes. It mostly boils down to the crafting system – how can I obtain the gear that I want for the end game. I don’t know yet, and the cash shop is there and the construction is not.

I can, however, guarantee that you are more likely to get a response from the devs with level and concrete criticism without claiming that you speak for the player base. You don’t, and they have their own internal metrics to prove it.

Coming to this from VT2 is an utter chore when it comes to weapons. While I understand the implementation of the shop as a method of prolonging the grind, it is an anti-player artificial extension of the game, and completely unneccessary. In VT2, you already have to scrap your weapons and create new ones/acquire them from crates. This is an acceptable extension of gameplay, because you can pick and choose precisely what you want, without having to wait an entire real life hour just to have the p…

Some thoughts about the state of the shops right now. This might end up being irrelevant depending on what other mechanics exist at full release, so this is very much to be taken as a critique of how things are right now and not how they might be on release. Anyway, that all said, here’s what think are currently the problems the shops have: Requisition shop: In general i prefer this over the lootbox system of vermintide 2, and i think that it’s good to give a bit more options in terms of what …

Currently in the Pre-Order Beta Test there are 3 ways to obtain items. Completing missions and getting the Emperors Gift Buying items from the hourly shop Buying items from Sire Melk using his special currency First I want to discuss the way the restocking of the shops make me enjoy the game less. For the people unaware, the regular shop refreshes on a 60 minute timer and will display a random assortment of equipment relative to the characters trust level. Sire Melk’s shop refreshes every 24 …

Maybe do some research before you make claims about your interpretation of what someone is saying?

Nah they’re right though, claiming “nobody likes” or “I speak for everybody” does make you look incredibly juvenile. You have effectively 0 data on what is and isn’t liked, these forums are a heavily skewed subset of the player base.

You’re not helping your own points any but you can take or leave that advice I guess.

Yeah most people just play and has 0 interactions on spaces like forums or discord or…reddit, we are just a vocal minority who constantly engages with others over the game. Even if most things that are being pointed here are indeed bad(They kinda are) and should be changed (They really should) we cant really say that we speak for the majority

Of course it’s worse. With VT2 lootboxes you got what you put in. You had control over your odds, to an extent. Performing well in a mission resulted in a high-grade chest or a high number of chests from the Wastes. In Darktide, if you don’t get what you want you are forced to wait an entire hour to see if you get lucky again, with the same odds and the same level of input over those odds (zero).

This doesn’t really even feel like a matter of opinion, I’m almost ready to call it objectively worse.

Nah they’re right though, claiming “nobody likes” or “I speak for everybody” does make you look incredibly juvenile. You have effectively 0 data on what is and isn’t liked, these forums are a heavily skewed subset of the player base.

You’re not helping your own points any but you can take or leave that advice I guess.

Nobody here actually said “I speak for everybody.” That’s just a phrased someone pulled out of thin air to conflate with “nobody likes” which is a relatively common phrase. Seeing as there a numerable other threads about the same issue, there are at least a significant amount of other people who dislike it. So I’ll rephrase for you.

A significant number of people take issue with this.

Paradoxically, those who would default insults like “juvenile” act as such themselves. Curiously common amongst these discussions.

That’s because it is worse.

It’s compounded by the fact that there’s other RNG issues - like the map selection. Don’t have a map you want to play at an appropriate difficulty? Too bad kid, try again later.

The whole game plays like a mobile game it’s wild.

Eh, it’s still appeal to popularity with 0 real data in your hands. Kinda side stepped my point to nitpick there.

Also it’s been like a day since launch. This feels like just a gather the pitchforks thread. I dunno what it’s supposed to say that hasn’t already been covered better by other threads. Anyway, you do you, I’mma try to stop feeding threads like this one.

What was your point? I didn’t see one.

The reason that people are, understandably, angry, is that on the launch day nothing new has been added since the beta, except for a fully featured cosmetic shop with predatory monetization practices (not going into that tangent, other threads for it).

Trailer videos show crafting among other things as being in the game on release, yet it is not so. But I could deal with all of that if it weren’t for the metaphorical slap in the face that adding such a thing in its current state to the game instead of something else actually gameplay oriented.

I’ve heard arguments that it’s okay because different dev teams work on different things in development-- well, alright, but that begs the question of why this was a priority over actual game features? It was still developed in lieu of something else.

And, even if it was already finished, why would you release it with the lack of any other actual gameplay content? It’s just a bad look.

This is basically what happened with Vermintide 2’s launch so yeah probably.

devs and the community manager are responding, 3-5 times a day, so im confused how people keep saying Fatshark is ignoring them.

perhaps the problems is their

Fatshark_Hedge has been responding to me and others around the forums.