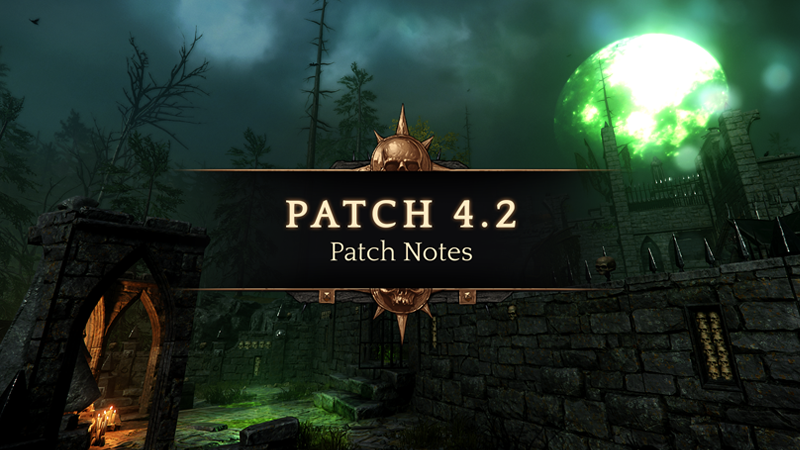 Welcome to patch 4.2 on PC. This patch brings the bot improvements that Gameplay Programmer Ričardas spoke about in the lastest Dev Blog. If you have not read it yet you can find it here!

Screaming Bell: Added some blockers to prevent dashing into places where you shouldn’t.

Oh, we’ll see about that.

Does this mean bots will no longer run face first into fire or gattlings with their melee weapnons out? O_O

Or will they still feel compelled to do it if other enemies are about?

Bots should now be more aware of pinged targets.

For 5 years I have been pinging everything in a blind belief that it somehow helps my bots. Has it finally become a reality?

Didn’t see anything specific about bots avoiding elite attacks that aren’t targeting them or dropping their block during monster combos.

GK not getting on Kill THP via Blessed Blade, which got broken by patch 4.1, did not get fixed.

Its apparently not important enough to fix a career skill in a timely manner.

Been hoping for an update like this for a long time, and I gotta say, it feels great to read those patch notes.

Only had the chance to do one run with bots since this patch (legend into the nest) any UC + WHC bot both felt more consistent, less dumb, and made better use of their ranged weapons.

Only wonky behaviour I saw was WHC bot going down very quickly to a rat ogre with absolutely nothing else around. Struck me as strange since bots have generally handle rat ogres well in my experience. Poor bot just copped basically every hit from the thing.

Probably a few more tweaks that could help but overall feeling real happy with this patch. Will see how they cope with Cata now when I get the chance. In theory just having them not run off and separate under pressure ought to be a big deal for consistency on its own so excited to see how they go.

Just tagging enemies seems cause it to give the too many social wheel messages message in chat if done too often. It’s very irritating.

By Taal this sounds lovely, Can’t wait to get home and try it out. I’ll see how they (and me) hold out on cata.

I don’t see any fix to Sienna bot being stuck in charged conflag state and walking incredibly slow or the infinite hanging on a ledge on the ramps in Skittergate after 2nd grim location.

Regardless, thank you for the patch

Ping issues are way worse for me compared to last patch. Game freezes for 10-30secs then it goes fast forward to current state. Also when I try to host all players get kicked out of lobby 90% of the time when first horde triggers. Anyone else dealing with the same problem?

Bots now use healing potion if they are at 40% health rather than 50%.

Also it needs more rule. When bot is wounded status, bot has to heal itself regardless of bots current hp (including temp hp).
[ * wounded status : The status which has no more chance to be downed before death ]

After patch 4.2, I played with bots in Cataclysm. Current bots don’t heal themselves even though they’re wounded status. Wounded bots keep waiting till their hp(including temp hp) lower than 40%.
Because of this, wounded bot easily get died by elite’s critical or overhead attacks. In Cataclysm, healing is very important, especially when player or bot is wounded status regardless of hp.

So, my suggestion is

Bots now use healing potion if they are wounded or at 40% health rather than 50%.

Great start. Could use some polish (I agree with) a few things previous replies have said) but the direction is lovely.

Are there any differences between this and this feature by the Bot Improvements - Combat mod? Should I still use the mod or will there be conflicts?

Better Melee Choices: The bots will now favor normal attacks over charged much more, unless their target would not be damaged by normal attacks.

Stay Closer: Whenever enemies are nearby, the bots will stay much closer to human players, making them more reliable during hordes.

Bots will still stray away from the party, but it looks like they will stay closer to a player much more often than before.

I did convocation of decay yesterday on cata with 2 players and a foot knight bot, and the bot werent being frustrating or stupid in the end event (probably due to not chasing specials). The bots still deal very little damage like before (due to often not attacking enemies), but they have better survivability.

This mod is completely dead. It doesn’t work in any way so you could just turn it off.

Is this information based on testing the mod in Patch 4.2? Because I’m pretty sure it worked prior to that patch.

Personally, I removed the “Bot Improvement - Combat” mod after the “Ping Elites” function was broken. Without this I don’t need this mod.

“Ping Elites” will forever remain in my heart, I miss it.