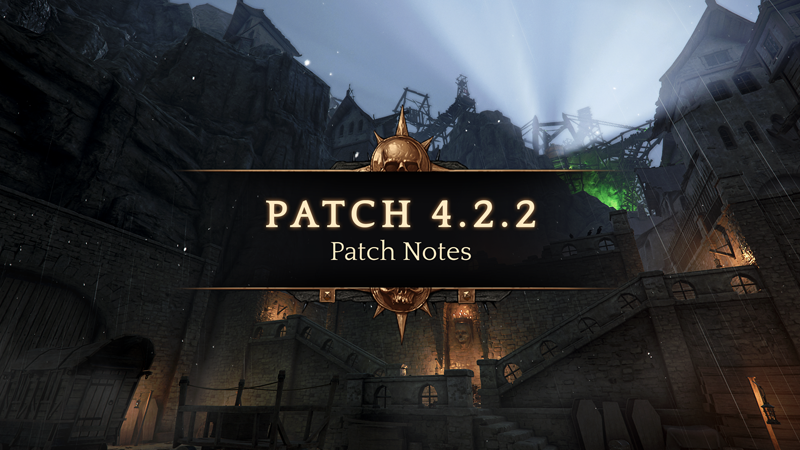 We just put live patch 4.2.2 which fixes a few crashes as well as some additional changes to bots and a few other fixes and tweaks.

More bot improvements, nice.
At this point can we ask for “disable bot healing” button or at least AI logic that will prevent them from healing you on Zealot Saltzpyre when you don’t want them to heal you? Please.

Fix “It’s Bloody Teamwork” not working as described in the tooltip. Tooltip says it increases the damage resistance provided by the Protective Presence aura. However what it does is provide another separate buff that stacks multiplicatively. This fix makes it so it works as described.

This is great but… speaking about FK, any new about Valiant Charge’s bug? I’m talking about its stagger that can be overwritten by other lighter stagger sources.

p.s moreover, in my opinion, base damage reduction should be increased to 30%… in order to compensate the fact that now it stacks multiplicatively (so the real dmg reduction added is less than 25%).

Added more conditions to bot healing now. They heal when they are have less than 40% current HP (including Temp HP)

Bots should do this same check when deciding to heal a player.

This is all cool, I have great respect for the bot’s and solo play fixing and improvement work.

But please don’t stop! What also need to do:

And I also have to say. It seems that after the last patches the bots have become worse at blocking and evading AoE attacks from monsters.

This all looks pretty great!

Glad for this change to be sure. I assume this change is mostly for consistency, but if it’s meant to be a balancing measure I don’t think it’s gonna change the pick rate of this talent any.

If it was given extra cooldown reduction, preferably gained through active means (so not passive CDR), then I could see it filling an interesting niche for BH but it’s still too unimpactful in the situations that matter most for its current cooldown. It’s a talent I really wanna love so wanted to give that feedback since it appears to be something you’re already looking at.

It is now ridiculously powerful in the cone/trapezoid area it affects, but that area is a bit too narrow to be really useful against even mixed Cata hordes (and it does practically nothing to armor) especially with the still long cooldown that can’t really be reduced. Considering all the monster/armor/special killing power you give up with this, there really needs to be more tweaking to make it a practical choice.

Thanks for the info, but I think there was a misunderstanding. Mine was a more general speech.
Currently, without considering the modifications from the various talents, the DR is divided as follows: 10% from No Guts, No Glory and 15% from Protective Presence… in theory 25% in total.

There are two problems:

Thanks for all the bot improvements. A lot of players play with bots at one point or another and it’s good to see these improvements being worked on.

I have no idea what you have done, but the sound levels - sound cues and enemies vs. environment - have become so off since yesterday that this is unplayable.

BTW, you know that the alt+tab is bugged and worse than ever?
(Edit: of course, today it works perfectly.)
(Edit #2: of course, just after the edit above, it stopped working again.)

This still happens, sorry to say. Not 100% like before, but it does happen occasionally.

Why don’t bots with natural bonds heal themselves immediately after the first fall? They can still be killed with a one punch, even with full health.
Like this:

My bots are constantly dying without drinking the cure they had.

Back end changes probably, or related to the telemetry? Nothing that affects players

Please cancel the terrible bloody hellish change that required now 20 headshots instead of 5 for the “Targeting Array” challenge from Outcast Engineer DLC!!! The likelihood of making this Challenge by honest way and in solo with bots is astronomically small, despite the enormous work and effort.

I made a huge mistake. I was frivolous and was in no hurry to make this Challenge as soon as possible, although I bought that bloody DLC on the day of the Release. I never expected the Masterwork Pistol to be such bad and inaccurate weapon.

Even more, I saved a lot of Heroic Deeds with the Vanguard, I thought it would help. But now I found out that when playing solo with bots, on the Veteran they will run out of ammo in 10 minutes, and on the Champion we all die if I don’t take care of the specials every second.

Because I alone take care of the killing of the specials, despite all the improvements to the bots and do 90% of the work in solo games.

The only option I see now is to play the Recruit until the Recruit’s Heroic Deed with the Vanguar drops out. And then this does not guarantee anything.

How long will it take? Is this entertainment you wanted for me?

I can’t think of anything else, only about this Challenge.

When their backs turned, we go!

7 Likes
next page →
Why not join the Fatshark Discord https://discord.gg/K6gyMpu