How do you see the new career of Saltzpyre?

Rather, for a warrior priest, I would suggest:

The hammers are best left to the elf.

Of course you guessed it. This is exactly how it will be. 100500% probability.

‘Just for fun’ I would suggest such an idea for an elf: The Silent Priest of Vaul. Elven hammer + “she doesn’t speak!” Greatest combo ever.

*Really, I need good weapons, and not just toys for collection. After all, what am I paying for?

No gunpowder weapons for Warrior Priest, doesn’t fit.
Instead, he should be reliant on miracles, like pointing his finger and suddenly his foe is struck by lighting or a beam of light, or even the Comet of Sigmar.

In fact, it fits. Well then, Saltzpуre can sacrifice a second eye too and become like Gerontious, the Blind Priest from ‘Blood on the Reik’ book. 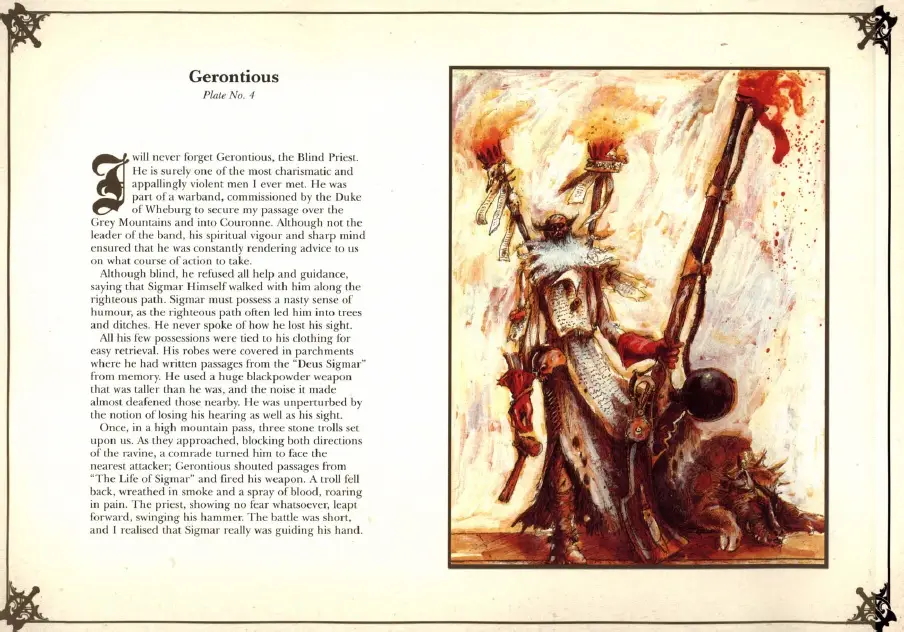 The main thing for me is to get a hаndgun, in one way or another. A premium career is last chance.

But gun have hammers on them

It would make things easier in this case, since all of these weapons already exist, animation- and balancing-wise, and Salty does have the smallest arsenal of weapons in general, so it would boost him up in this regard. I’d rather have them focus on the carreer and its abilities to make it more interesting, while still being able to give him a very lore-friendly choice of weapons. I mean, I kinda like that two different heroes have acces to essentially identical weapons. Salty already has very unique weapons with sepcial features like rapier and billhook, so giving him a bigger assortment of “more mundane” weapons seems like an interesting route to take.

I can totally see his secondary slot gettting an assorment of “prayer books”, like I’ve said. I mean, look at this assortment of divine lore and tell me this doesn’t scream “Put me into your game” Warrior Priest of Sigmar | Warhammer Wiki | Fandom

Give each book a combination of three abilities of differing strengths, and we’re all set:
a small passive buff, a medium left click, a stronger chargable right click, with ability bar being the ammo. I like how Engineer dissolved the idea that the active ability has to be something that can only be triggered once the bar is full and depletes the whole bar, I’d like to see this used again and a WP carreer seems to be a nice fit. It would also break with the theme that each carreer needs an AoE ability, a direct damage ability, a charge ability and a stealth ability.

If its not warrior priest im leaving.

What I’d like to see is a class like Engi.
I don’t really like playing Engi cause of all the hassle of switching between guns, however they didn’t make him an impregnable damagedealing tank carrying the whole team (ahem, GK) and that I love.

It’d be just another carrier, not a premium steamroller.

I mean they seem to just be going straight down the character list on hero selection, so I’d bet it will go Kerillian, Saltzpyre, then Sienna.

I’m not too fussed what the next Saltz career is as long as it plays significantly different to his current careers, and preferably not another double melee weapon career, though that’s not a huge issue, I just think 2 are enough as is. I would definitely like to see another unique Ult mechanic in the vein of Engi, maybe a buffing aura that drains your Ult Meyer but can be turned on and off at will? Dunno really, they’ll probably surprise us whatever we guess at

Warpriest, generate holy power as you do damage, then use that to drop heals. Ultimate with a AOE smite ability. He is a devotee of Sigmar, pretty sure he already has headgear from cult of Sigmar.
Weapons will be one handed shield, Tomes, Great hammer and maybe melee staff, Tome combo.

I’d love to hear Salty sing hymns and shanties and whatnot!

What’s cooler than an imperial Warrior Priest? Only the Kislevite Priest of the Great Orthodoxy!

He will cleanse the Old World from the old lore forever!

There are enough hints now to make it clear, his new class won’t be a warpriest.
My guess is because his current weapons aren’t suitable for that role. And using the 2h hammer only would be quite a one-sided experience.

I have faith in FS they did good job so far with GK and Engi so I just want to know when the next ones will be released. I wish I could get the cosmetic packs to support them but alas I’m out of job.

A darktide preview would be a Saucy addition.

Ult One-Eye!: Saltzpyre calls forth the power of sigmar summoning one large eyeball that has an aura around it, The eyeball is active for 5 seconds and 3 sets of 4 small twin tailed comets petrude and drop from the eyeball in an Arc only damaging enemies from the explosion they would petrude North South East West…, on top of that downed allies in the aura are revived at the cost of 25 hp from Salt and If Salt has 25 hp or less the revive will not happen.

1st weapon: A hammer but with a twist its a big meat tenderizer.

I really think this would be unique have lots of utility and be fun too play.