Will Beastmen get more fixes?

After banging my head for hours against Dark Omens (only map I haven’t beaten with bots on Cata), I really just have to ask; are the Beastmen going to get some improvements? Their hitboxes are buggy and their attacks are not properly synced, which is SO much worse as they also attack faster and their chaff enemies deal more damage than any other faction. Archers are a good idea, but desperately need something done, like limited ammo - this would make it so that there is a reward for dodging their shots and give characters without ranged weapons some method of coping with them.

I know it’s an old DLC, and not the most popular at this point, but man. These guys stand out so badly against the other two factions it hurts. And yet - I think they could be great and are close! They’ve already gotten some improvements that have been significant. Don’t even change their chaff doing more damage, or the wall of HP that is their hordes (since they have more Gors than Ungors, it seems in each horde) - that’s fine for their hordes to be more dangerous than most.

Major Adjustments:
-Synch the visuals of their attacks better with their swings (I think this and the Archers change are the single most important)
-Give Archers a limit on shots before they switch to melee. Maybe they just really want some tasty Grail Knight flesh. Extra spicy from the holiness!

Potential Adjustments to consider:
-Slow their attack speed slightly, they seem out of synch with every other enemy faction, and owing to their otherwise sticky style of combat, this can make it so a player cannot react.
-Adjust their stagger; right now they stagger back a long distance but don’t stay staggered for very long. It’s unintuitive, and makes the player barely able to get space or take advantage of their vulnerability. This could be left alone as a sort of feature that makes them harder, but right now I feel like both of these qualities
-Remove the Gor headbutt. It looks like they’re staggering, and in a horde situation you often just cannot see it coming.
-Adjust the size of the Minotaur. He looks oversized, and when you’re close to him you lose the ability to see what he’s even doing. No other boss is as huge.

They really could use another special, too, as banners are really cool but just so common they start to become annoying. Banners are a really cool idea, reinforcing their brute-force methods and forcing players out of a defensive position, but there should be something else. Perhaps you could re-purpose the Chaos Hound thing we’ve seen in the trailers for Darktide, but I don’t know what it would do right now. Or, perhaps a Gor that throws a net or something; you’d have to attack it to free your ally, and maybe players could actually free themselves by attacking while in it (but have it take longer).

Incidentally, Bestigors are well done; the charge is unique and I like having an armored enemy that’s beefier than a Stormvermin. Also, some animation issues aside, the faction looks very good at this point.

I’ve always wanted to like fighting this enemy faction! I can even prove it! Please do something with them so they’re not just content that many people wish they didn’t have to experience because they want WoM Weapons/Cata.

As a final note; I’m sure some people like them as-is. That’s fine. I just want the faction to be better.

-Remove the Gor headbutt. It looks like they’re staggering, and in a horde situation you often just cannot see it coming.

The other thing is it’s a very non-threatening animation. The bestigor headbutt makes a ton of sense, but just standing there winding up a headbang really does not convey “This is going to smack you and deal significant damage.”

To my knowledge, enemies are actually designed on scale in this game. That’s what a minotaur’s size in WHF should be. In any case, the problematic unit has always been the gor imo. It’s unlike any other enemy in the game, in the sense that it’s extremely common within the ranks of its faction and also has a very complex behavior, possessing a large number of attack animations. It’s vastly different from other infantry units both in behavior and stats. It is weird that they have so little hp and mass but they hit harder than elites with their swings. I think that their animations overall could still be reigned in a bit in terms of their speed and reach. I wouldn’t mind their damage getting nerfed either, as they essentially 1shot anybody on Cataclysm and this can be due to still very wonky animations that are impossible to read, especially when they are bunched up. In turn, I wouldn’t mind them having more health and stagger resistance. They are some pretty beefy boys, not sure why they’d be significantly weaker than marauders in terms of health while also thrown around like ragdolls by any decent swing.

Incidentally, Bestigors are well done; the charge is unique

The charge is also very annoying when it comes from off screen. Personally, I’d like it if the U5 had some voicelines for when they’ve being targeted by a charge. Just like how they would call out when they were targeted by a ratling gunner in V1.

I was amazed to find out they have less mass, hp and stagger resistance than raiders.

but it still honestly feels like they don’t stagger properly to me.

If I’ve got about 10 Gor in front of me in stagger range, and I push attack, it feels like I’m going to get instantly attacked by one of them most of the time. This is even as a host, so it’s not just desync as a client.
So I’m not sure if they just have an extremely fast recovery from stagger, but it feels inconsistant.

They are just an incredibly frustrating enemy to fight.

My pet hate with Ungor is that their forward spear thrust doesn’t angle upwards yet has a hitbox of a skyscraper. You could be 20 foot above them and they thrust into the base of a cliff nowhere near you and they still “hit” you…

I’d honestly rather they were all replaced with plague monks…

I don’t know technically what their mass is, but I do know that they fly around a lot more than marauders so something’s probably different. It’s very easy to have one of them knocked on the ground behind someone, from where it casually gets up and immediately smashes that person. They have remained incredibly frustrating to deal with even after all of the initial nerfing.

I don’t know technically what their mass is

Assuming the in game bestiary mod is accurate:

Similar disparity for Ungor and Fanatics

They look bigger and beefier, but they apparently have less mess/hp/stagger resistance.

I’m not even sure if my issues with them isn’t actually a bug. As loading up cata dark omen to test, the “ambush” at the start is no issue, everything staggered as expected.
Yet half the time in chaos wastes when beastmen are present, they are very inconsistent to stagger. Sometimes thrown back disproportionally far, sometimes seemingly unaffected or only lightly staggered despite being in the centre of the screen.
Maybe a hitbox issue that’s made worse by uneven terrain. The non-euclidean hitboxes are bad enough at the best of times on uneven terrain (curved attack arcs are really giant squares).

Yet half the time in chaos wastes when beastmen are present, they are very inconsistent to stagger.

That could simply be due to varying power levels, since you start off at base 450 in expeditions and can go all the way up to 700.

That could simply be due to varying power levels, since you start off at base 450 in expeditions and can go all the way up to 700.

Surely that would be an all or none issue though? Rather than only half of a pack, although I guess as enemy attacks have varying degrees of stagger resistance baked into them, that could account for it.

I’m so used to testing in regular missions that I forget how swingy power level is in the wastes, especially if you have bad luck with anvils and only get offered random weapons or greens even on your 3rd zone.

I just did another dark omen run on cata and got to the second tome before losing all the bots and I still didn’t see any issues beyond what you mentioned, that they get thrown around so much you end up with them behind you.

I generally don’t mind them on Dark Omen, the map feels like it was designed for them in mind, especially the archers, lots of cover and corners to use to your advantage in most areas. I still really hate encountering beastmen in literally any other zone.

although I guess as enemy attacks have varying degrees of stagger resistance baked into them, that could account for it.

Ok I wanted to test this… and my guess was wrong.

Even with white weapons, the Gor’s low health, mass and stagger resistance makes them easy to push around, and they still get scattered all over the place (aren’t goats known for being sure footed and hard to move?).

I certainly wasn’t playing great - it’s baking hot outside and I just got back from walking my dog - but this clip is likely half of my issues with beastmen: 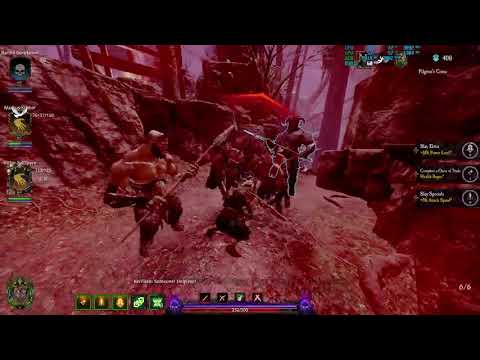 I’m not sure if that lunge just had enough stagger resistance for it not to be affected by the push, or if it counted as not being in the range, FOV makes it hard to judge how close things in the centre of your screen really are.
Even if the one that hit me was out of range, the one that was staggered had an ungor practically inside him that was unaffected.

side note, why is twitch so obnoxious about publishing clips? They don’t embed here and to export, you need to highlight, not clip.

Their tendency to stagger INTO and behind the player when hit is so bizarre. It’s part of something I realized last night, which is that when fighting Beastmen you feel like you’re stuck. So many of their units require more time than equivalent units from other factions.

Bowmen you pass will end up massed behind you, forcing you to ultimately turn back and deal with them. Banners behind you will just keep following you, so you have to go back to deal with them so you don’t risk them being up when a horde comes. You just want to kill some basic chaff and they go flying all over the place like ping-pong balls in a wind tunnel, so you have to chase them down.

There’s not really anything to be done about the Bannergoats spawning behind you, but if the archers had limited ammo and the way the chaff staggers all over the place was corrected, they’d be much less obnoxious to fight.