We Need A Report Function

What’s also hilarious is the amount of people who actually live by/believe in the Imperium of Man’s tenants, when their whole schtick is dark satire.

I completely agree with you, it is hilarious how some people just read something people made up and make it a major part of their personality.

So, I 100% believe that there needs to be a report button - and not just one for in-mission. Making the central hub a public zone means people are able to hang around on the Mourning Star and message each other - for good or ill.

I’m a woman, playing a female character, and I’ve already had this - unprompted - interaction come entirely out of the blue: 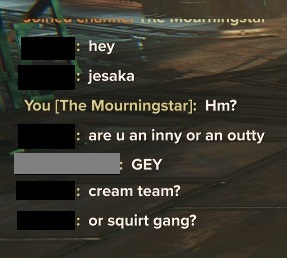 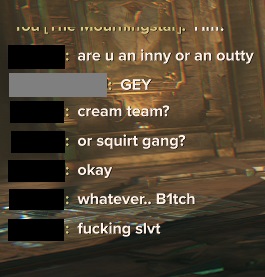 Like … dude … I’m just trying to play a game to have fun. This is not okay.

If someone did this in any other space, they’d be escorted out by security for harassing customers. Even if they themselves were customers, too. I don’t see why we should expect less from Fatshark than from any other place that’s running a business.

I’m hoping a report feature does get added, as soon as Fatshark realizes the urgency and has enough time to dedicate the man-hours to it. And to those saying they shouldn’t bother … it honestly seems insulting to Fatshark to imply they don’t have the manpower or professionalism to care about maintaining a basic code of conduct in their space. Sometimes, that requires escorting someone politely but firmly off the premises.

We hear you. Closing this post as it has derailed somewhat.