Introduce a report players function. Just played with geriatricpancakes who refused to do the objectives, revive, constant stream of hate, and then kick right before match ended so I didn’t get any XP. Toxic low level player with a sour mouth and expected everyone else to do the work. How do you manage griefing

You can report people in support I think. I reported people and got no reply though so they probably don’t do anything about it.

You can report people via the support portal. We don’t follow up with the reporter to avoid lashback in either direction, but we do act on serious ones (example: someone going around spouting off slurs etc, but not something like “I was kicked” or “this person rage quit”)

Are you able to verify that they wrote nasty stuff in the match?

The fact you dont have this in game is such a design flaw in current times. Its not like its hard to implement considering 90% of games out there have that for anything that is multiplayer.

For Fatshark it is immeasurably complex…

You’re going to get 3 man groups who kick their fourth right before the end every single time because “it’s funny,” then.

Abuse of kick is an issue. I’ve seen it in a number of games. I usually wasn’t on the receiving end of it… usually.

Likely the best way to deal with it is that when someone is kicked, the game is saved, and they end up in another instance with the bots. Also the bots should NOT drop the tomes/grims they might be carrying in the new instance. Then if it’s right at the end, the kicked player can simply exit with the bots for full pay.

Or, if it’s in the last 20% of the map, and they are kicked or even crash, the game saves that and pays them as normal, (perhaps with a rate limiter to avoid exploit,) as the ‘right at the end crashes’ can really wreck the game. I’ve had quite a number of games where we waited by the exit for someone to return from a disconnect.

I think they would ask for a screenshot attached to the report.

I was planning on leveling my zealot to 30 using only the starting weapons so I could troll heresy and damnation runs but I’m finding them surprisingly viable at the higher levels. Only issue is having to deal with the marginally higher ttk on enemies is accidently making me better at the game.

Today I got called “FUKING BRAINLET, "FUKING MONKEY”, “FCKING REARD”, “FCKING REARDED PIECE OF SH*T” and then kicked in a middle of a game (damnation difficulty). That’s because I shot at pox burster someone apparently wanted to let get close and then push (without telling us beforehand).

Here’s are the screenshot of the chat: 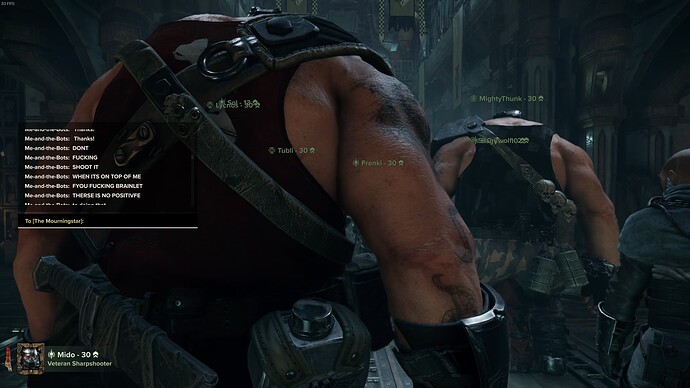 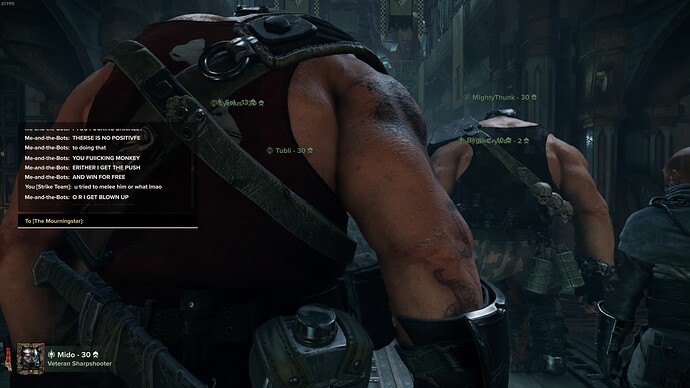 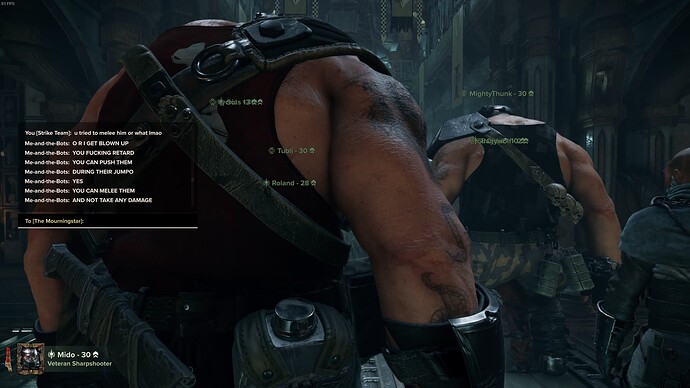 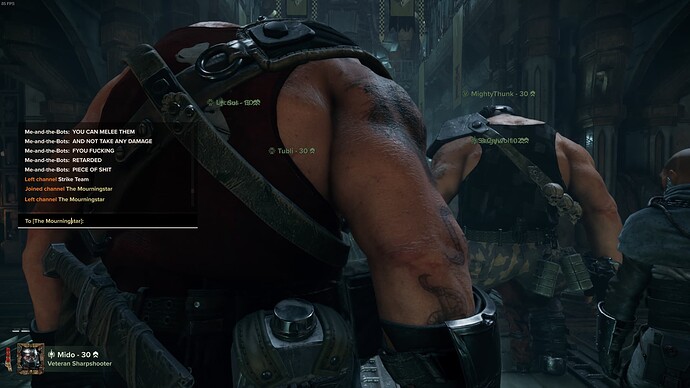 While the dude is definitely blowing a fuse there, the essence of his rant is true, like you said.
Don’t shoot busters close to teammates unless you want to actively grief them.
At heresy and above people generally tend to know not to do that.

I assume the boxpurster lead to a down or failure of the run. Given how some people struggle with damnation and REALLY REALLY REALLY want to beat it, I reckon that it might push some over the edge when an otherwise decent run fails.

Tbh I don’t really bother reporting cases like this. Most people who whine are just as bad as the people they whine about. I just leave and move on with my day. Why take their toxicity upon myself?

There wouldnt be anything to report. Its absolute kindergarden sht. Imagine sitting at your desk as support slave and waging through this kinda sht every day.

I think you are assuming too much. We do not know the situation and scenario.
It might have been that @Mido was taking down the pox from range as any normal person would do if possible and the other guy decided to charge in and push it, while it was being killed, without any information on the intent.
Seriously there is no explanation for behaviour showed afterwards.
If you play with randoms you know what your get yourself into.
It is obvious ppl are not in sync and some are better/worse than others.
When someone has a meltdown after a failed run in a video game they should attend anger management therapy.

Dude was far away and behind a wall so I couldn’t even tell if we was holding a melee or a gun. And there was even a health station in a second. It’s not like he was sitting next to a pox walker and then I shot, no. I was shooting it as it was moving towards him.

100%
I wish current day people would have experienced early day 1.6 CS or starcraft:bw lobbies almost 20 years ago. The amount of casual shittalk would put people in jail today. And funny enough no one cared as it was just videogames.

I had the first toxic player experience today. One player deliberately blew up every barrel next to me and tried to kill me that way and even succeeded once.
I was playing with my brother and we tried to kick him since he was griefing, but the other random player was in a strike team with the griefer, so no dice.
He continued griefing and managed to lose 2 scriptures by killing himself and at the end they decided to try and kick my brother out of the match.

Can’t block neither of them since their names never showed up in the social after the mission and I have no clue about their Steam names. All I know that their character names were Croteam and Azeron.

I don’t see anyplace to do this in the portal. Can you provide the direct link to the article?