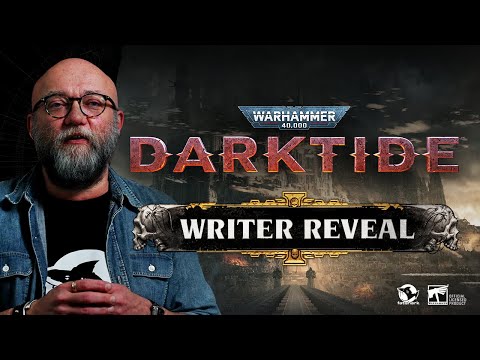 Today we revealed that Warhammer 40,000: Darktide is being written in cooperation with renowned Black Library author Dan Abnett! Abnett is well known in the Warhammer universe for his bestselling Warhammer 40,000 novels and we couldn’t be more excited about the collaboration and what it means for the game.

Darktide promises to focus on the humanity within the Warhammer 40,000 world and there’s no better author to help us realise that vision, with many of Dan’s works - from his Eisenhorn books and the Gaunt’s Ghost series - being the inspiration behind our approach.

We sat down with Dan to probe a little more into who he is, what he does, and what it means for the set up for Warhammer 40,000: Darktide. Our Q&A can be found below, and if you don’t want to miss out on future announcements and postings from the team, be sure to wishlist the game over on the Steam Store!

Tell us a bit about yourself.

I’m a writer of comics, novels and games. I started out in comics, working for Marvel, and have since written for all the major companies - Marvel, DC, Dark Horse and the UK’s famous 2000AD. My work for Marvel on the Guardians of the Galaxy was used as the basis for the Marvel movies. I’ve also written over fifty novels, many best-selling… Doctor Who, Primeval, Torchwood, Tomb Raider, and many for the Warhammer universe, and I’ve worked on games such as Alien: Isolation and Shadow of Mordor. I love what I do, and I know I’m lucky to be doing it. 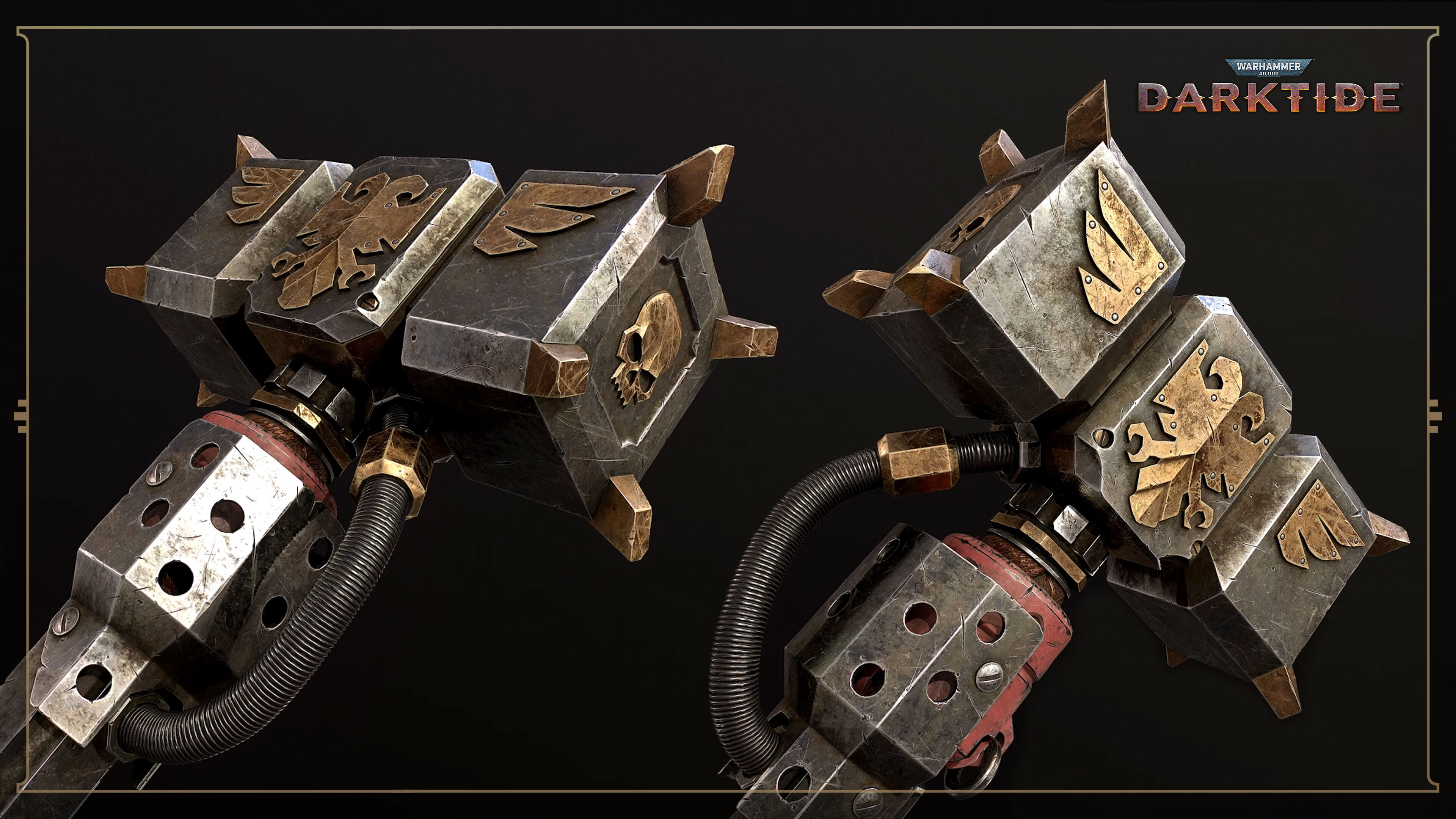 When did you first come in contact with Warhammer, and when did you start working with the brand?

I was well aware of Games Workshop - I’d been a keen pen-and-paper role player back in the day, and when I was invited to work for Warhammer, back at the very start of their fiction publishing line, I had a good take on the ‘atmosphere’ of the universe. I’ve written a lot of novels, comics and short stories for them in the last two decades, as their success as a fiction publisher has grown, and I’ve also been able to help shape the universe a little in my books. My Eisenhorn series (Inquisitor novels) and my Gaunt’s Ghost series (Imperial Guard) have fleshed out aspects of the 40K world, and I wrote some key parts of the Horus Heresy novel series, the background ‘myth’ of the whole universe.

What is your favorite thing with Warhammer 40,000?

It’s such a rich universe. It’s notoriously ‘dark’… it’s certainly not a place you’d want to actually live in, but it’s got a grand, epic, decayed… wonderful feel of its own. It’s quite unlike anything else. The Imperium of Mankind is vast, ancient, stagnating and riddled with superstition and zealous beliefs. It’s also permanently at war, against powerful and predatory alien species, and the infernal power of the Warp. What I love most, I suppose, is that there’s really no limit to what you can do… from small stories, ‘detective’ style fiction, to military science fiction, to all-out epic myth. It’s an amazing space, full of ideas and possibilities, and with an amazing visual style. But its “grim darkness” is it’s most deliciously defining quality, and its most addictive aspect. 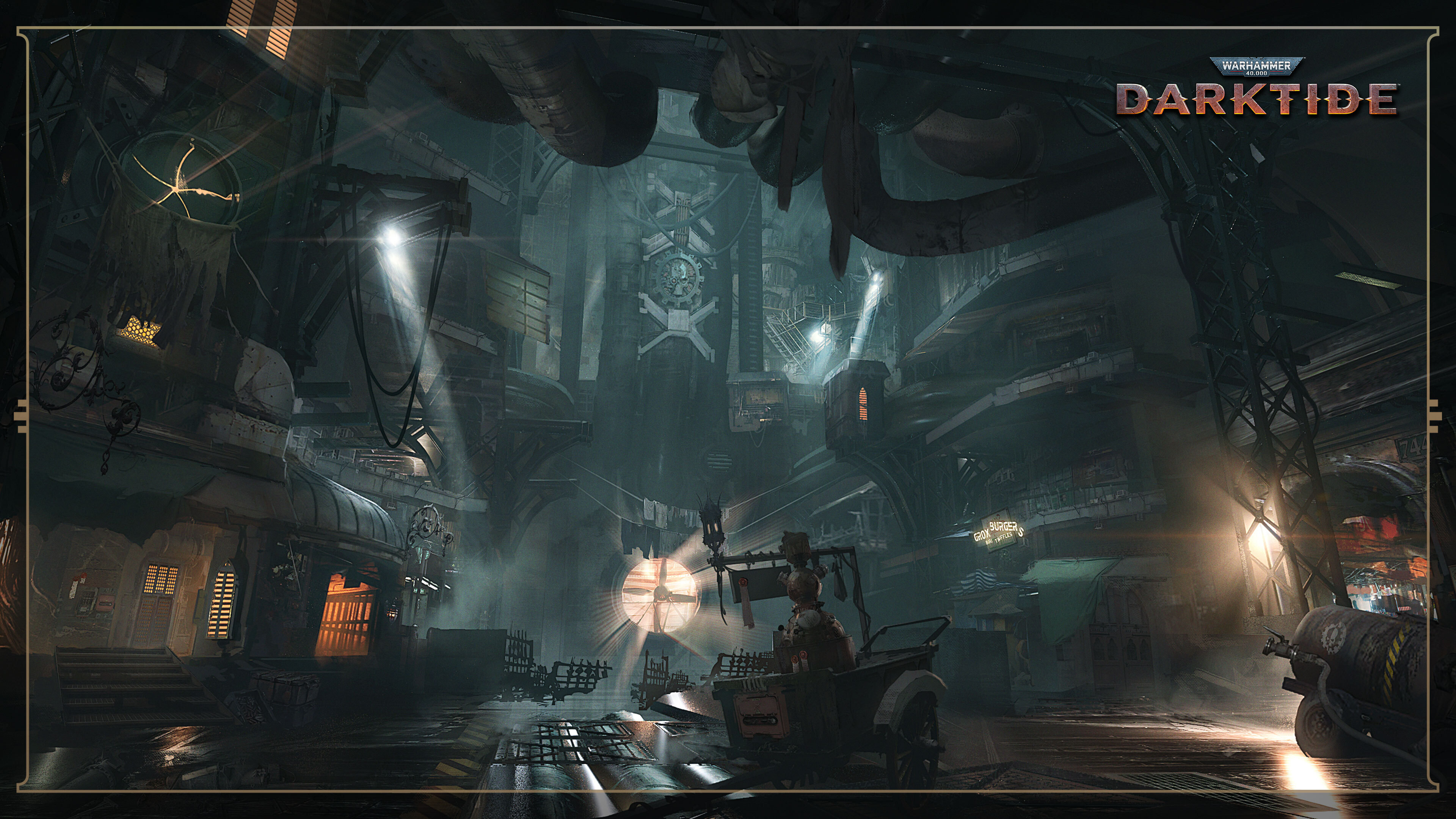 As soon as you hear 40,000 you think of Space Marines. When you heard that Darktide did not want to focus on Space Marines, but instead a motley crew of human characters, what was your reaction?

Space Marines are iconic, but they are very powerful, post-human elite forces… and also very rare in the vast scale of the universe. Humans are plentiful. While Space Marines are the obvious starting point for any game or novel, you actually get a much better feel for the universe, in all its gothic sweep and cosmic horror, if you see it from the perspective of an ordinary human. In novels, like the Gaunt series, or the Eisenhorn cycle, I’ve chosen the ‘human’ viewpoint because it’s so rewarding. That’s the case with Darktide too. We want to emphasise the human scale, the human ‘heart’ in the midst of the vastness and cosmic wonder… and we also want to emphasise the survival and horror aspect. As a human, you’re vulnerable: it’s all about wit, courage, determination and focus. You’re not immortal, invulnerable or wearing a suit of ceramite power armour. It’s just you and the darkness, and that makes for a really incredible playing experience.

What’s the advantage of having a human point of view for the players?

There’s more character, more detail, and a greater richness. You’ll get to figure things out and deal with them as though you’re really there, and you’ll learn so much more about what life in the Imperium is actually like for the vast majority of people. The risks are greater, but then so are the subtleties and intrigues. It also really amplifies the excitement - as a human, you’re fragile and vulnerable, and probably also scared. And you have no idea what you’re about to find and confront. The player will have much greater identification with their character, and will have to learn to stick with their team, and work with them, in order to survive. 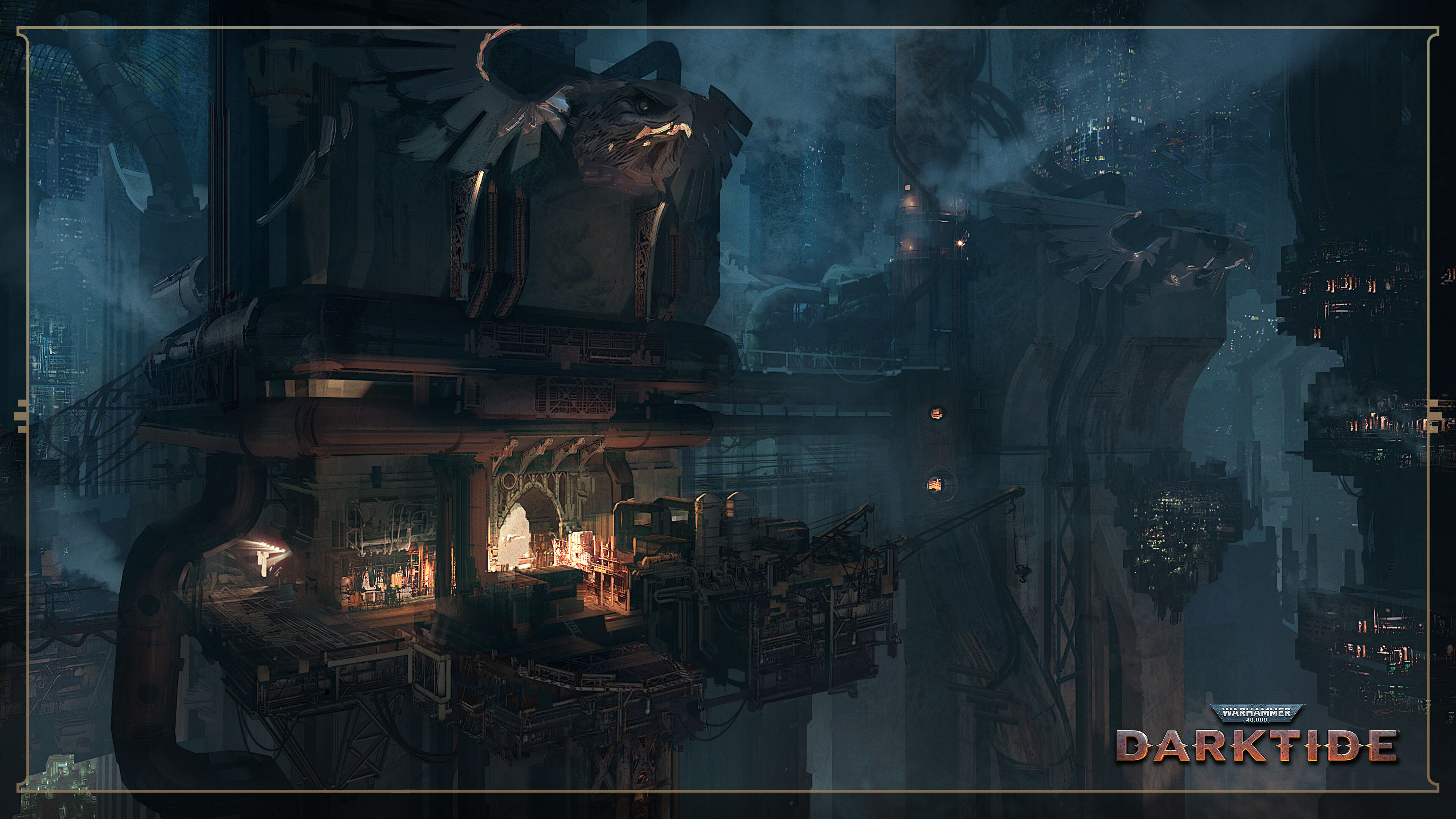 What is the biggest challenge in telling a human perspective in a Warhammer 40,000 world?

Making it comprehensible and ‘real’… building a believable world where humans might live, with a detailed society and culture. And also not making things so deadly they don’t last five minutes!

Tell us about life in the Tertium Hive.

In many ways, it’s typical of many or most “hive cities” in the Imperium. It’s old, it’s decaying in some parts and lawless in others, it’s overpopulated and hidebound by the rules and edicts of Imperial control. It’s also - and I can’t emphasise this enough - vast. It’s a city the size of a country, a continent. Billions live here, and in its warren of streets and its deep underlevels you can encounter almost anyone and discover almost anything. From the faded, ornate opulence of the highest spires where the aristocracy lives, to the industrial mid-levels and street markets, to the lowest and most dangerous sub-sub levels, abandoned and forgotten, it is a place of detail, danger and wonder. And secrets. There are secrets hidden away in dark corners everywhere… lost tech, criminal enterprises, dark histories… and maybe other things that are even worse and which threaten the fabric of Imperial society. That’s why the Inquisitor has come, and that’s why he’s ordered you to explore and discover those secrets. That’s the game. 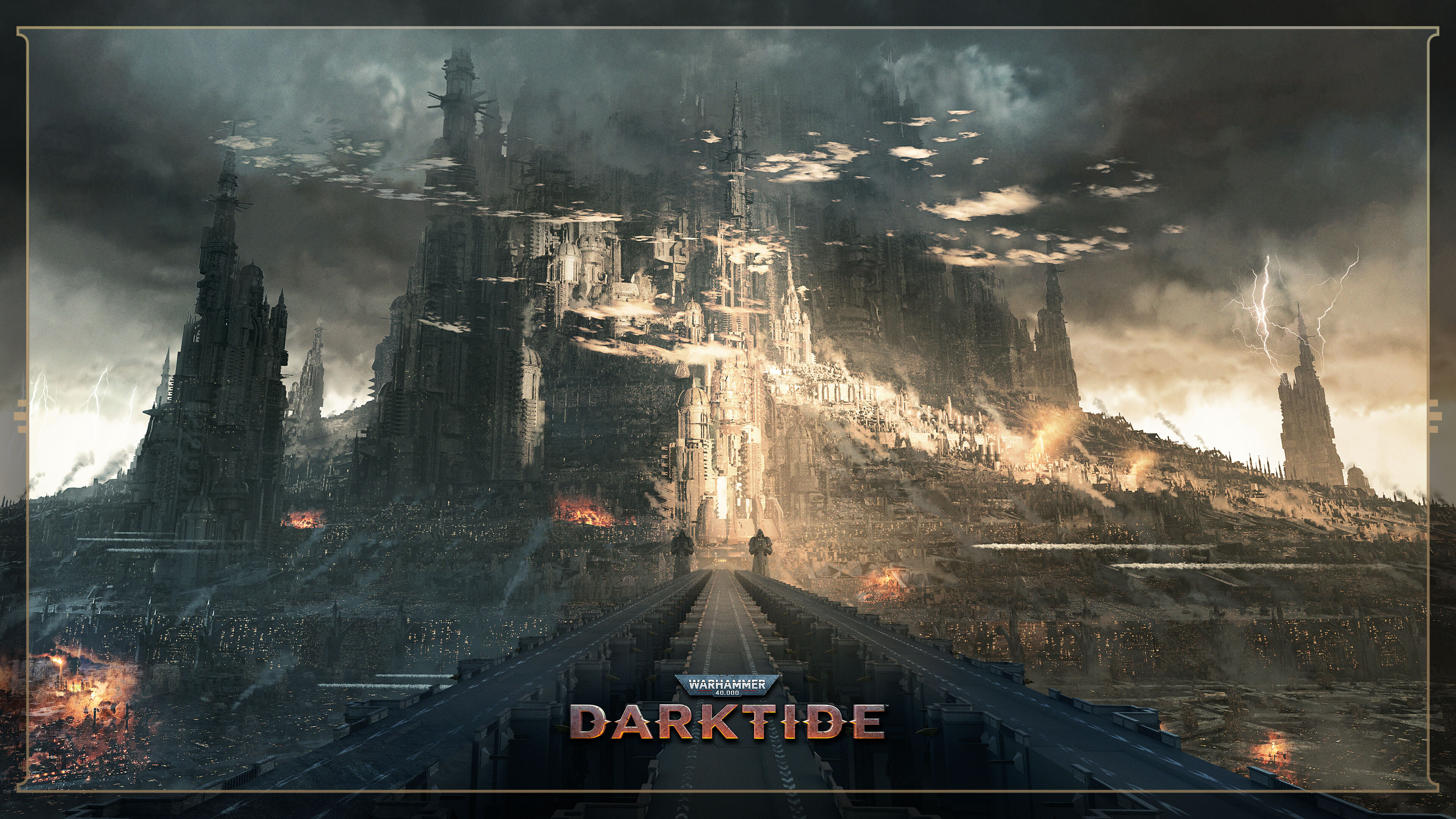 For anyone new to Warhammer 40,000, what books do you recommend to get started with?

The game itself, and the core rulebooks and codexes are a great place, and so is the fiction. There’s a lot you can read, and you can dip in anywhere. Can I recommend my own works? The Eisenhorn trilogy (which leads to further stories) is about an Inquisitor and the ‘ordinary, daily life’ in the Imperium and is often cited as a great starting place. If you want to learn the background mythology, go to the Horus Heresy series. If you want to experience military life from the point of view of an ordinary human soldier, try my Gaunt’s Ghosts books, or for a view of things from the Space Marine perspective, try the awesome Dark Imperium novels out now, which showcase the Adeptus Astartes and reveal the current state of things in this war-torn universe.

Dan Abnett is a multiple New York Times bestselling author and an award-winning comic book writer. He has written over fifty novels, including the acclaimed Gaunt’s Ghosts series, the Inquisitor Eisenhorn Cycle, and volumes of the million-selling Horus Heresy series. His many other novels include The Silent Stars Go By (Doctor Who), Rocket Raccoon and Groot: Steal the Galaxy, Triumff, and Embedded. In comics, his 2008 run on The Guardians of the Galaxy for Marvel formed the inspiration for the blockbuster movies. He is also noted for significant work on DC’s Legion of Superheroes, Justice League and Aquaman and, for the Vertigo imprint, The New Deadwardians. A regular contributor to the UK’s long-running 2000AD, he is the creator of series including Brink, Grey Area, Feral and Foe, Lawless, Kingdom and the classic Sinister Dexter. He has also written extensively for the games industry, including Shadow of Mordor and Alien:Isolation. Dan lives and works in Maidstone, Kent, in the UK.

This is exactly what I need. Real live Warhammer.

Fatshark has always had great writers; it’s probably one of their strongest aspects. But nice to see such a big name working on Darktide as well. Looking forward to seeing what they come up with.

Any news about versus?

Did anyone expect someone else than Dan Abnett, since he also helped on Vermintide 1 and 2 ?

Did anyone expect someone else

Peter Fehervari, of couse, would be very cool too. His books had the most unexpected look at Warhammer among all the authors of the Black Library.

try the awesome Dark Imperium novels out now, which showcase the Adeptus Astartes and reveal the current state of things in this war-torn universe.

In view of this, my main question is on whose side Inquisitor in Darktide, and therefore - our future heroes. Because in addition to the traditional division into radicals / puritans in the current Warhammer, the political situation is very important - many in the Inquisition want to remove or carry out reforms of Roboute Guilliman so that nothing changes in the Imperium.

And it was the Nurgle Daemon Rotigus who revealed the truth about the Imperium Secundus. This truth can destroy everything.

I hope this game will not have several unrelated game mods as well as Vermintide2. 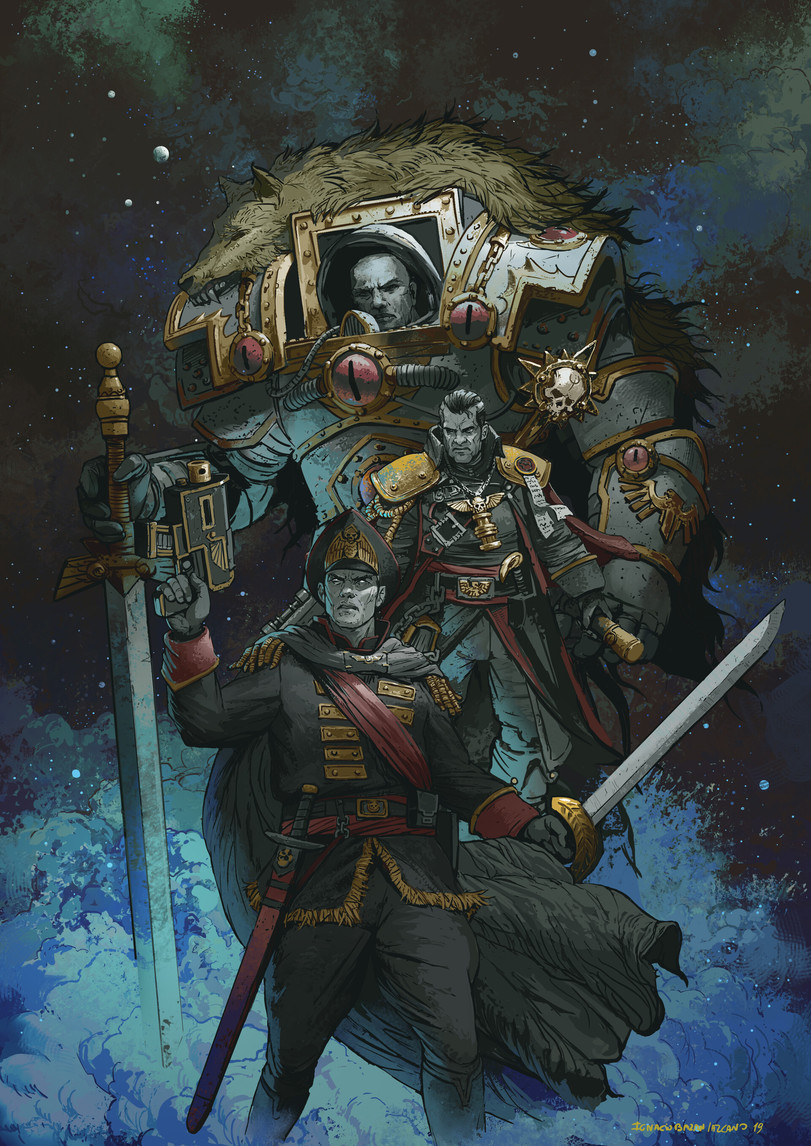 Nice to know Darktide will be another one!

Will Dan be writing a Novel alongside his work here?

How cool would it be to pre-order Darktide and receive a copy of the book based on the story of the game.