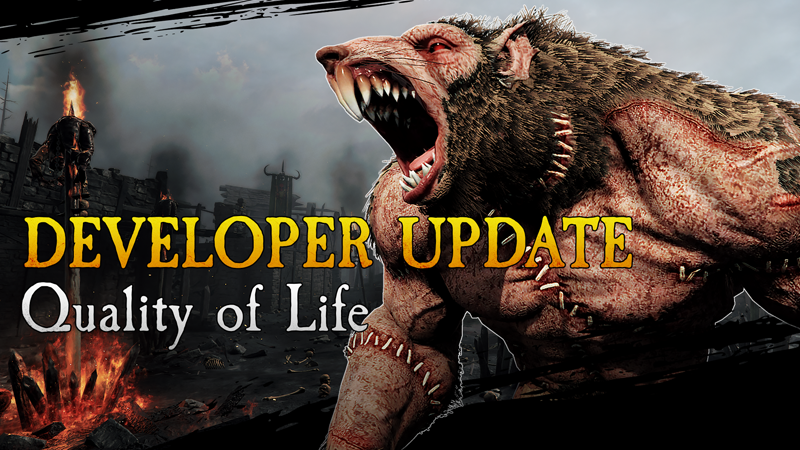 On October 28th the free update Grudge Marks will be available on all platforms together with Geheimnisnacht. Besides the new content, we have also added some Quality of Life changes, and in this dev blog you can read all about the upcoming changes.

The TAB menu has gotten a make-over. The new features will show the equipped equipment of all the players and a new, more condensed layout, makes it easier to see any incoming enemies even when viewing the TAB overlay. The new overlay also shows active modifiers for the mission in progress and maintains the original functionality you’re accustomed to, such as muting players or being able to click through to their community profile on Steam. 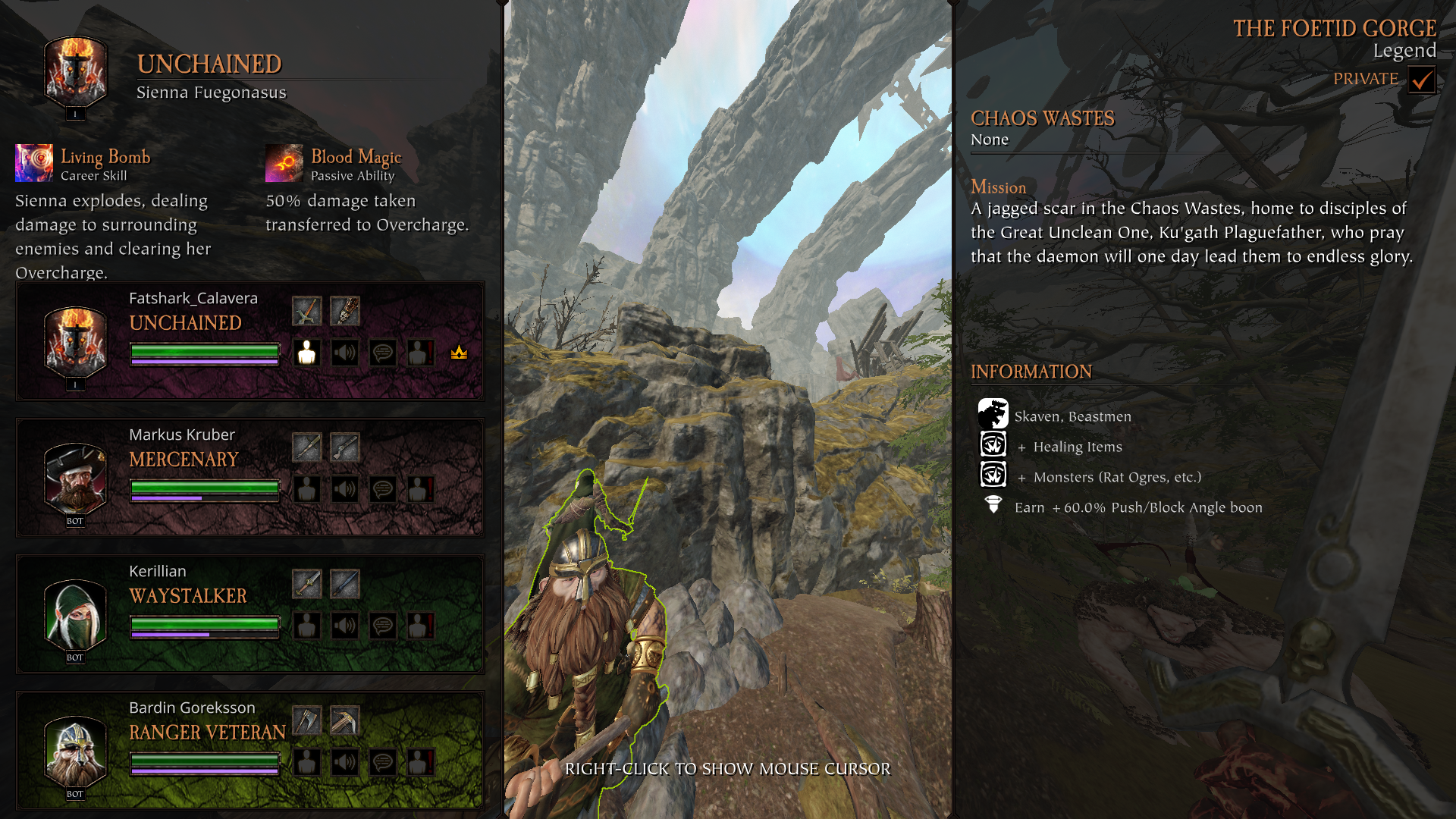 Steam Rich Presence has been added to Vermintide 2! You can now easily spot if your fellow ratsmashers need another hero to fight alongside them, what difficulty they are playing, and which mission.

OPENING MULTIPLE CHESTS AT ONCE

This hardly requires much of an introduction: in the next update players will be able to open multiple chests at once! It’s possible to see the quality of the items in opened chests which aren’t the current focus, so for those just grinding out reds, a cursory scan of the dots atop the screen will let you know if a red item was pulled from an opened chest. 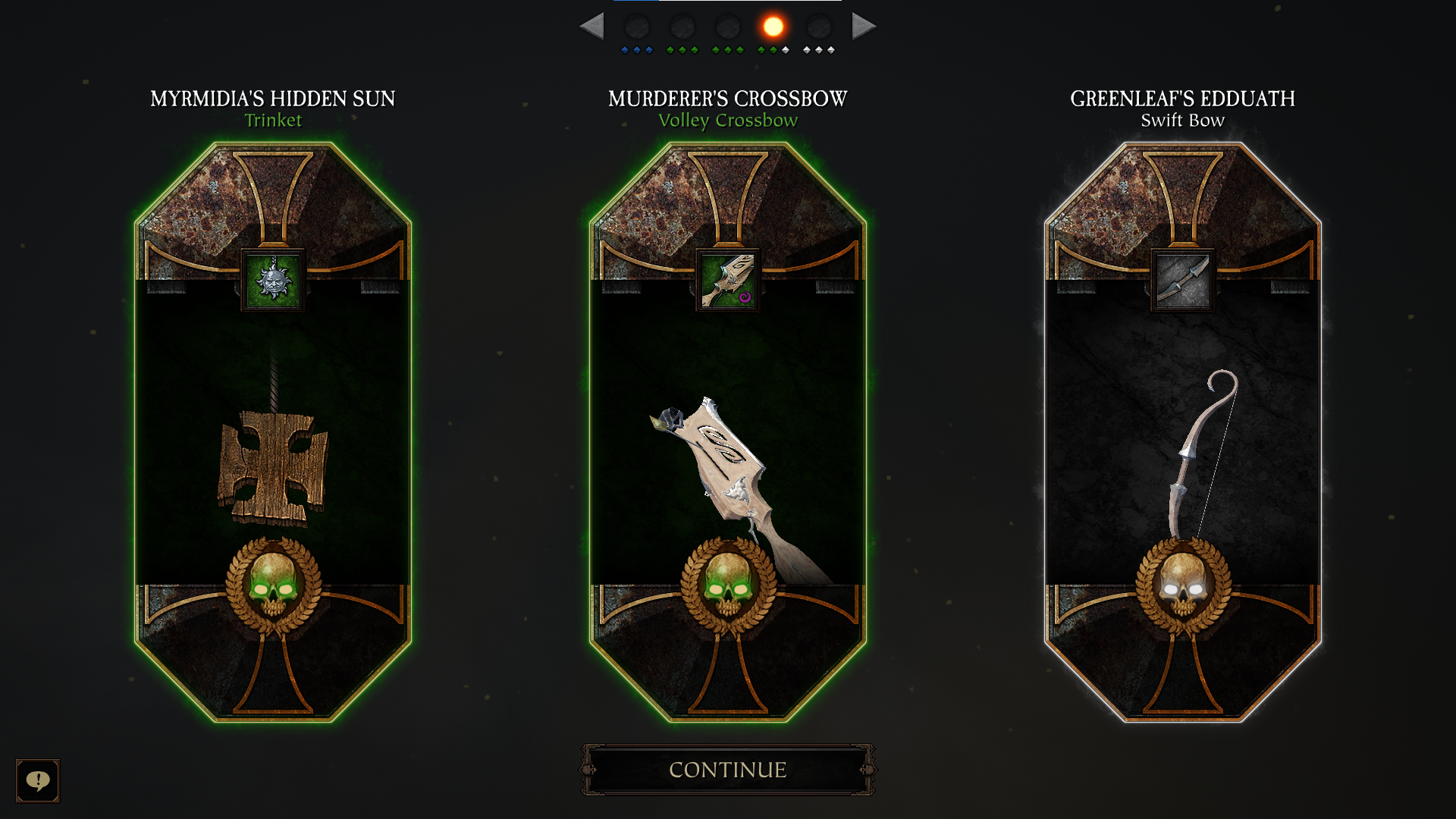 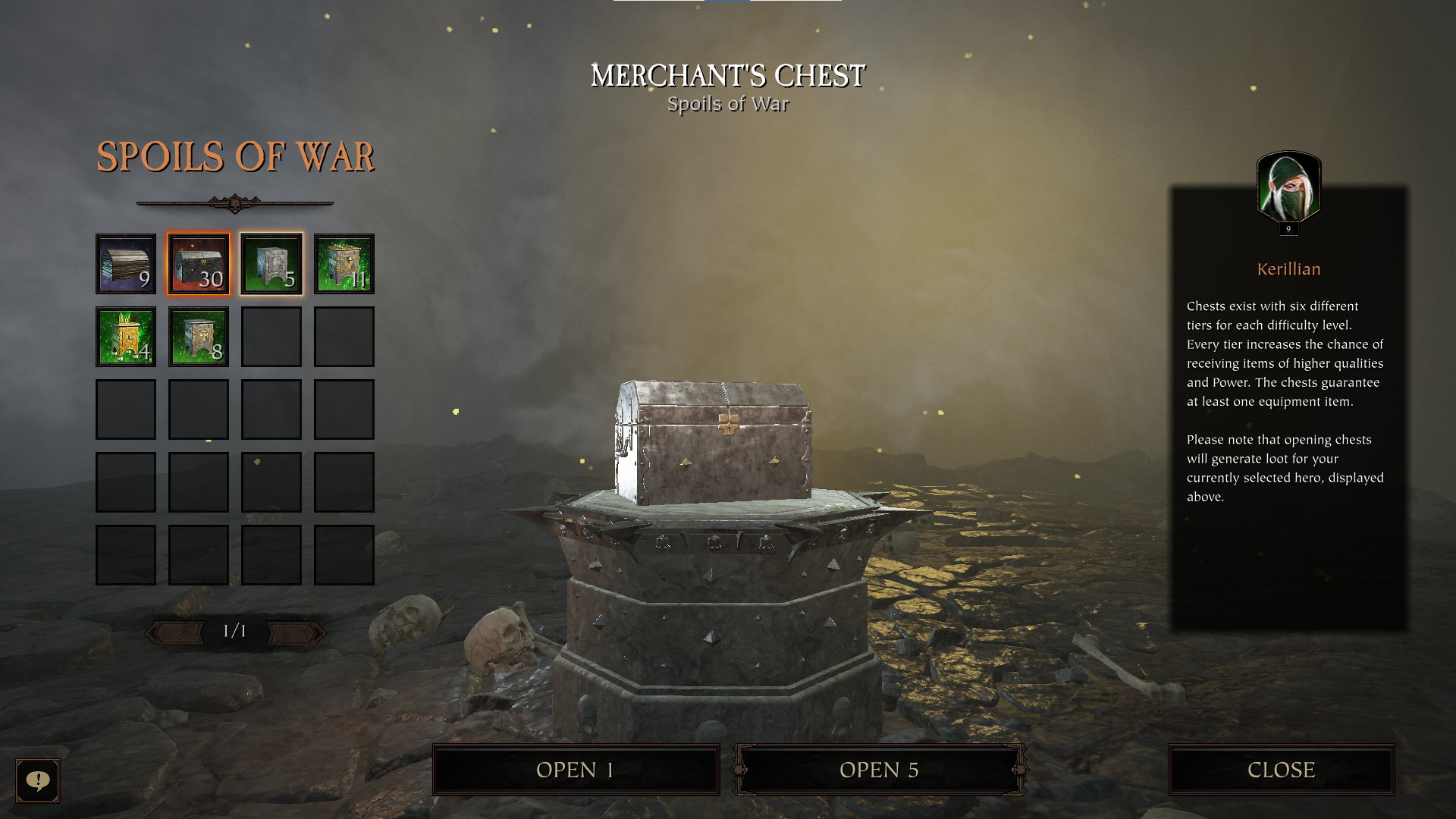 The border on the [OPEN 5] button indicates the last action done, so you can repeat it by just pressing spacebar.

Whilst not the most common of problems, it’s certainly an egregious one when it raises its head. Previously, when a player was awarded a bunch of items whilst not in the game (say through the purchase of a DLC), each item would be awarded one a time when they next logged in. Now, when the player logs in, they will be presented with an interface showing them all the items obtained that they can browse at their leisure or simply close off and get back to the game. No more waiting to cycle through a train of pop-ups. Nice. 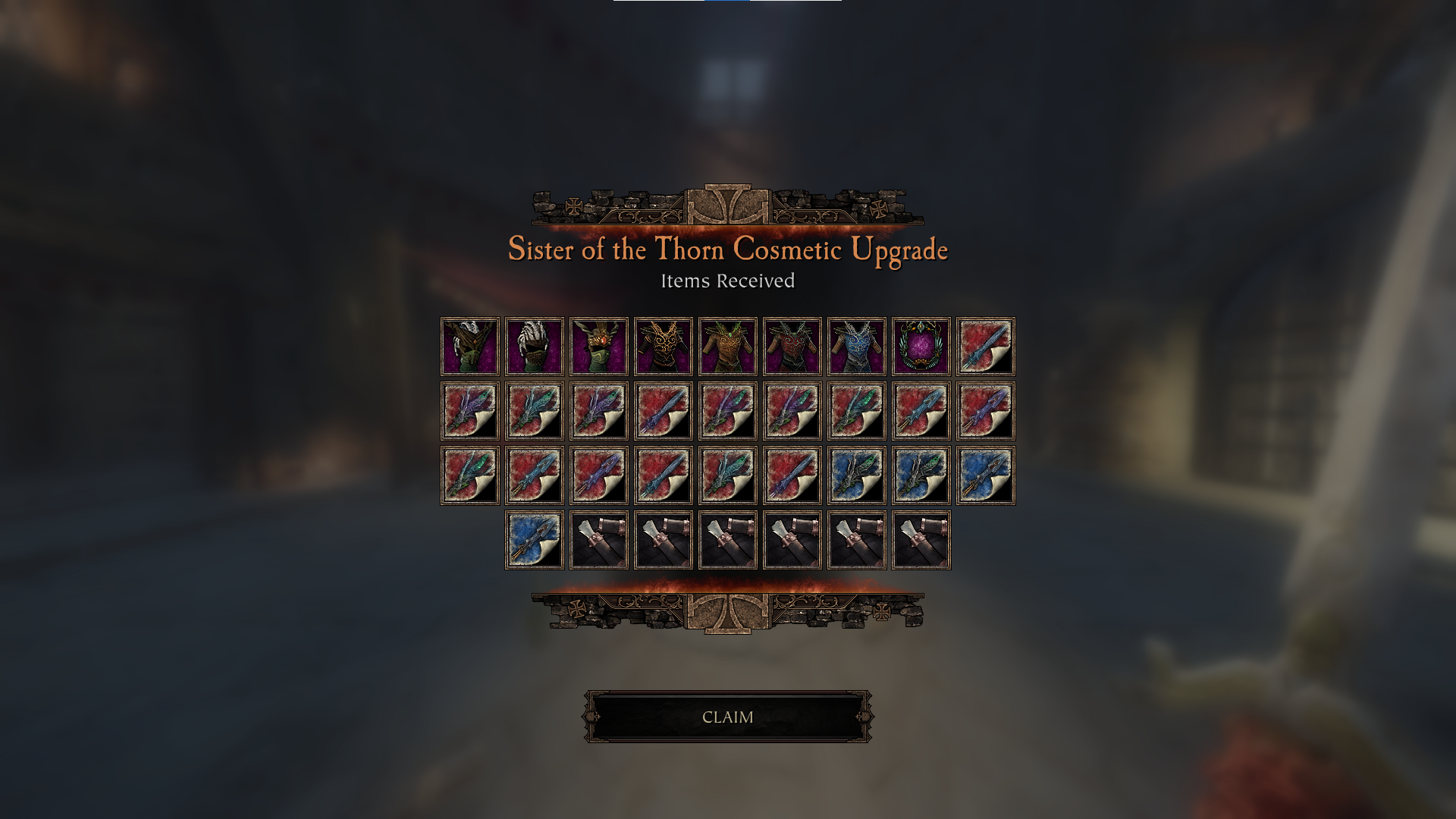 The Mission select screen has seen some love, now showing players information about completion statistics, such as which heroes have bested the mission and how many of the total collectibles have been found within each mission. 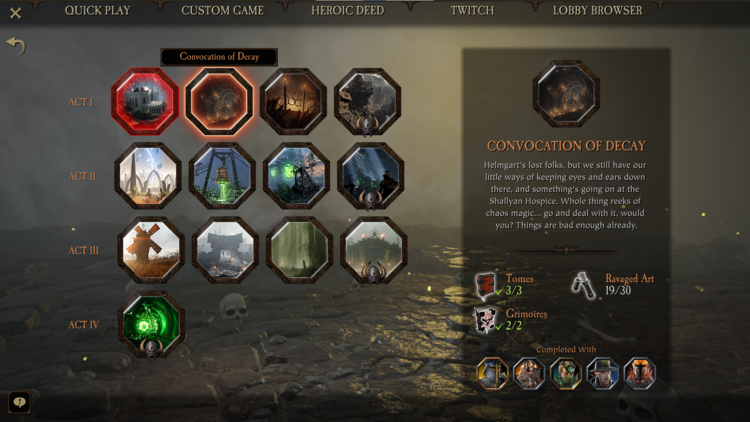 Gone are the days where you have to flick through pages and pages of challenges to find the status of a specific ask from Okri. A search bar has been added allowing you to easily find a specific challenge and see its completion state. You’re also able to use text-based queries, such as reward:art or completed:true in order to bring up a list of specific challenges that meet the query.

These are the currently available filters: 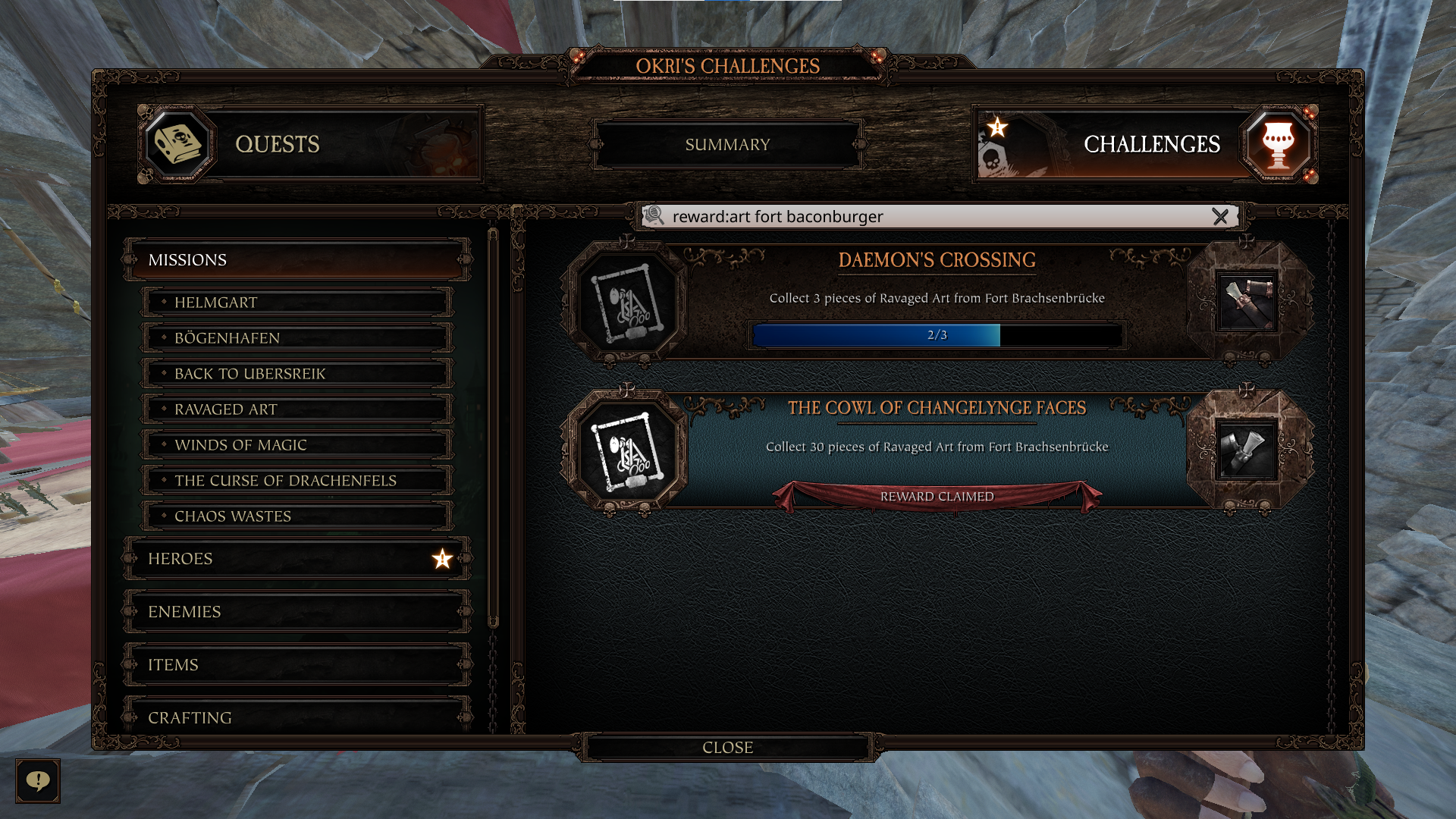 Two developers updates in one week! Will we keep up that tempo or have you spent all your ammunition already?

If there’s still time, could you add the talents to the TAB screen as well?

Also, any news about that inventory change?

Two developers updates in one week! Will we keep up that tempo or have you spent all your ammunition already?

I can’t promise the same tempo every week, but when we have something we can share, we will share it

Man please don’t stop with the QoL changes to this game these are great changes. If i had to say anymore to consider down the line for future changes something like these would be great.

This is probably not a good idea, would be too much clutter.

you would press right click when in TAB, hover the mouse over the thing you want to see the stats from, and then youd see small little properties box showing properties/trait which is how it already works in the player list plus mod which is what the new TAB player list is based off. Talents would just need to be squeezed in somewhere probably just remove the health section since its ancillary info that you can see outside of the TAB list.

And Deed Modifiers are just little icons with the name of the modifier next to it which is no different than whats being shown in the picture with it showing the CW modifiers are active.

As for Twitch settings displayed they can do something simple as (% Value/Vote Timer/Inbetween Votes Timer) Blessing Active: (All/Items/None) + Weekly Modifiers (Y/N) and it would show all the neccessary information in a very small portion of the screen.

Hm if minimized until hovered it might be fine, i do not use that mod myself as i never felt the need for it but since it exists there are doubtlessly those who do.

Some good stuff, thank you!
Is it to daring to ask after all that was shown when some of the most requested quality of life reworks, like deeds and crafting, will have their debut? Or will their implementation first be seen in Darktide?

So we know that Slatz career won’t come at the same time, but is there a possibility of a new weapon pack

Sorry to sound like a broken record, but are we getting an increase to the inventory size this update? If so, then that would be a one of the better QoL changes. It was first teased back in the beginning of January, so I figure it would be reasonable to ask again.

Hi @Vormar.Mishap, We’ve got a fix in the works to remove duplicate cosmetics

The plan isn’t to increase inventory size, but ultimately for us to move hard-baked items (cosmetics/items that cannot be customised) to a different storage solution (which is what we did with illusions already). It’s just taking a bit of time.

This all looks very cool. I do wonder though if this update will come with any balance adjustments. Not hoping for anything crazy, just toning down the objectively absurd stuff like Moonbow and Coruscation alt fire, maybe MW pistol too. I’d throw bloodrazor and Morai Hegs in there too but that’s starting to sound less like a minor balance pass. Y’know, just to tide us over to a hopefully more major balance update further down the road (I’d be assuming after all premium careers are out would be realistic, as much as I’d like one sooner).

Since we’re going to play chaos wastes a bit longer (and I play that mostly as engineer) I’d also like to see a fix to engineer being unable to carry more than a bomb between missions and thus being unable to get the special bomb if he already has some.

Are these also for Xbox and PS?

Am I misunderstanding you, because it seems like your question is answered in the first sentence of the post?