Hello. One of my favorite aspects of the loot system in Vermintide 2 is the Illusion system. Being able to change what your weapon looks like in between games is great fun, and a huge improvement over the first game. I personally don’t prefer the glowey illusions (red rarity; bogenhafen skins), and would like to see more unique illusions added in the future. \

I will list off my ideas here and edit as needed - feel free to post your own! I’m just doing more general ideas here, rather than anything too detailed or making concept art. Go as in-depth as you want.

I guess I only have two for now. Might add more in the future.

Huzzah for the Grudge-Raker having enough surface area to mark the grudge it was made to fix!

Glowing runes is pretty cool, I kinda like the red weapons, but I think taking a page from Warhammer online in terms of art direction would be cool, maybe have “legendary” weapon illusions that are just over the top ornate in the spirit of true warhammer sillyness, like for example one of the WHC high end rapiers in WAR had a flaming skull pommel, and a wavy blade, it looked pretty darn cool!

You forgot the Skarrenruf Maraz axe - also has 1 “head” and looks dope.
But yeah, more illusions is always better, and yup, more “substantial” Grudgeraker would be nice. I hope one day we’ll see more variety - grudgeraker with a stock would be a nice touch.

Something I’ve always thought would be cool would be getting fitting weapon skins from other Warhammer factions. I mean, there are a lot of factions we’re likely never going to see in the game, right? So what would be the harm of giving some Brettonian-themed weapon skins to Kruber? Some Druchii or Asur-themed ones for Kerillian? Or even skins for existing weapons, like letting Markus’s halberd look like a Stormvermin one.

They could even sell these in a cosmetic pack with the background that the heroes “liberated” some collector’s cache of exotic weapons (even if they’re just skins).

There is the Estalian Rapier
Yes this takes your point apar-
Not really but there seems to be a good chance of it happening given that one already exists. 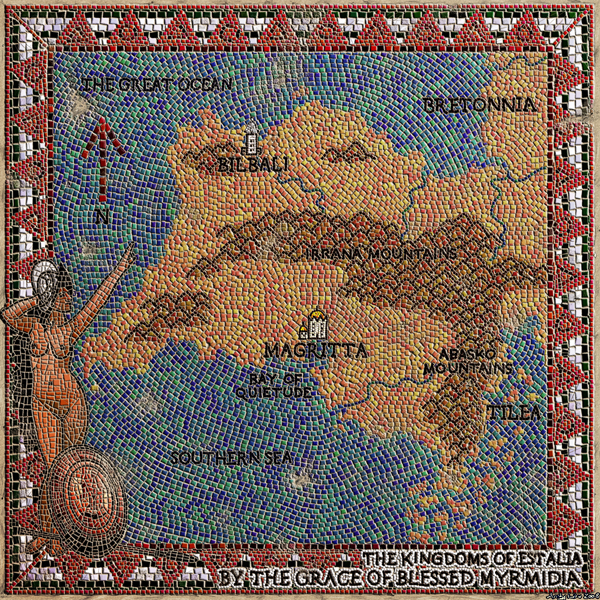 Estalia is a parched realm of Men that is located south of Bretonnia and southwest of the Empire. The hot, dry lands of Estalia are not united under one crown.

I really want that rapier skin, but I only ever seem to get Noble’s Epee . . .

That’s a really good idea, giving heroes illusions from other factions. Maybe make it career-specific, although that could end up being overly complicated. It’s just that while a Mercenary using Skaven weaponry makes perfect sense (as he just uses what’s best for the job), having a knight in active duty using non-imperial weapons seems to be pushing it.

I also feel like Bardin would use only Dwarf-forged weapons, and Saltzpyre wouldn’t use anything from an “evil” faction. But giving Kerillian Druchii daggers or an Asur spear would work nicely. We could also have Sienna using exotic weapons from maybe Norsca or Lustria, since at the end of the day all she cares about is fire.

Anyway, dwarf-made weapons for Krub and Saltz would totaly make sense, since dwarfs are major arms seller in the empire, the only problem is the coin required to obtain such fine piece of worksmanship.
Also it would be fun to see some arms from Kislev. A sabre would really be a nice addition to Saltz and Kruber’s arsenals.

The way I figure it - if they find weapons, you can always say “well, we need all the weapons we can get, beggars can’t be choosers!” I think any faction’s weapons would be fine so long as they aren’t actually imbued with evil power.

Anyway, dwarf-made weapons for Krub and Saltz would totaly make sense, since dwarfs are major arms seller in the empire, the only problem is the coin required to obtain such fine piece of worksmanship.

Give ol’ Kruber your Runefang c’mon!

Yeah, if we all had magic swords, we’d sort out these Northlanders in no time!

. . . But then Karl Franz would have less hats, wouldn’t he?

Well, I’m not sayong magic/finest weapons, I’m saying weapons made by dwarf crafetsmen for sale among the imperial citizens

HA! I got that reference. Nailed it. Also, cease your heresy.

I think aside from almost anything to do with price, the five have met some dwarves in their travels. Bardin/Kruber have, almost certainly, been able to secure some dwarven steel for the team.

It’d also be sorta awesome to see some varying armor styles. I know this is a thread for weapon illusions, but it’d be a sweet shout-out to the deep bond shared by Kruber and Bardin if Kruber had the equivalent of Ironbreaker armor but for a human. I’d also like to see the equipment of ol’ Saltzy get totally trashed as he descends into his obsession… perhaps even equipping himself with powerful equipment from the pactsworn.

Well, I’m not sayong magic/finest weapons, I’m saying weapons made by dwarf crafetsmen for sale among the imperial citizens

Obviously! Im just making a joke, although Kruber with a Runefang would prolly make my day.

Saltz sure as hell wouldnt’t touch anything rat-made unless it’s a matter of failing/succeedkng in his holy mission (think: he somehow loses his weapon and grabs 1st thing he can to smash some charging ratman over the head). But we’re in Empire, human weapons are scattered everywhere so no point in such drastic means. As to go on missions equipped with Skaven weapons.
Also everyone should notice - our heroes have some marks on their armor, but generally it’s in really good condition and it’s obvious it’s cared for. But weapons, oh boy, lets take the modt thrashed piece of junk in the keep and rub some salt and wet sand into it, oh and be sure to not forget about leaving the wooden bows outside for years (any maintenance is out of question) so they crack the very second they are drawn.

Hmmmmm… I agree with you for nearly everything, but ol’ Saltzy is losing his marbles. He is certainly set in his faith, but stronger-willed men than he have committed acts of heresy to sustain the Empire. Just sayin’!

Nah, actually Saltzpyre mellowed a bit since VT1 - just try the dialogue, where he death-threatens Kerilian, mentions strangling the elf being his job etc. etc. - I like his old self better of course, because who doesn’t hate Kerilion?
In VT2 he’s Mr Witch Hunter Nice Guy. Aye, he is still harsh, but there’s no sign of him “losing his marbles”. His faith in Sigmar is strong, but strong faith is nothing uncommon in the Old World, quite the contrary, IMO he’s quite tolerant - Kruber openly mentions he would like Sigmar to bring him a cold flagon of ale - well, and guess what Saltz says? Nothing, cause he doesn’t give a damn about such trivial matters.
If he ever strays from the path of righteousness, I’ll be only playing him to jump off the cliff to his death - because that’s the only reward heretic should ever get.

This actually makes me think; you know what would be some cool skins? Battle-damaged variants. Big gouges, parts missing off armor plates, even some blood smears.

Amen and preach it! Some battle-scarred equipment/weapon illusions would be sweet.

You could have battle-scarred version of the glowing weapons that could ooze light out of them or have ichor-coated weapons from being driven into so many pactsworn!