Other ‘Tips and Info’ threads for other Characters are linked at the bottom.

Feel free to ask or answer any questions, and I’ll add it to the main post, so it’s easier to find. I will add, remove or reword sections on request.

These are discussion threads, where the aim is to share and test different mechanical interactions or gameplay strategies that aren’t made clear by game descriptions or by general gameplay experience. For that reason I will not be focusing on breakpoints too heavily.

For in-depth guides with specific stat builds and breakpoints, check out Sleezyrats and Royal w/ Cheese’s guides on Steam guides: 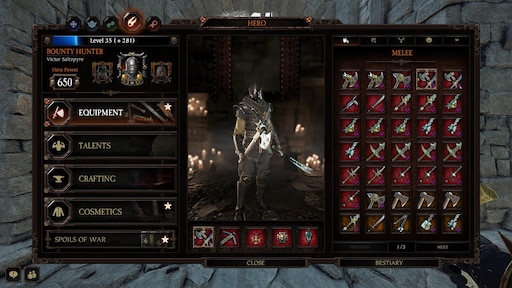 This guide is made to supplement the Cataclysm build guides Royale w/ Cheese and I made for every career. Every player has a different play style, and every team has different needs. This supplement i

As expected, there isn’t really much to say about GK, even though he’s one of the most fun Careers.

I still don’t know what to do with these threads. I might get change the ‘general opinion’ sections out to a general formula description of optimal builds, or a short guide. If I could be bothered to info gather all the breakpoints that would be good.

Considering making one for every Career and combining them based on character, and then asking these to be put into ‘Player Guides’, so there would be 5 really long threads.

When I started with the Outcast Engineer one, it was just to see what worked on him, but these kind of evolved into being partial guides.

Does Make 'Em Bleed only work with Ranged?
Works with melee too, just like BH.

Does Virtue of The Knightly Temper outdo the normal Power builds with a WPoS (Crit Power) or WHC (CDR Ult/Trink build)?
Heavily depends on your headshot rate, even with WHC. Though with WHC your can technically out damage regular build consistently due to current Sword & Mace(dual wield + high cleave).