The class we need next 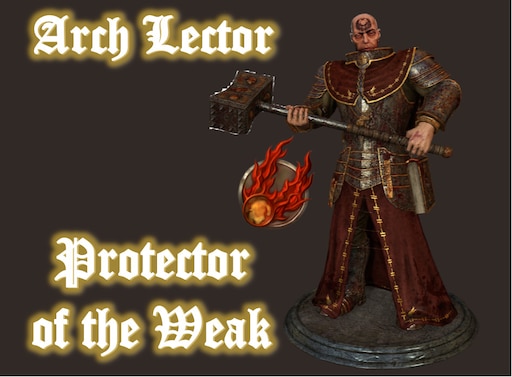 Steam Community :: :: Protector of the weak

EDIT
Oh I would like to see a Warrior Priest hero in VT… As a completely new character. Somewhat of a silent Luthor Huss type of character. @ArkBlanc what do you think about that concept… Usually silent and calm Warrior Priest when he speaks to other heroes, but when you activate his skill, he shouts with a deep booming voice that reverberates all around.

But please stop with the classes and careers for now, leave that for Vermintide 3

I would prefer that Victor gets a warrior priest class tbh. Because I want to save the new character slots for a vampire, a sister of sigmar and a spellsinger/jade wizard :V

I mean, it’s not that all WPs should be buffed up muscular Empire chads… but I’d kinda want to see something like that

I think that if VT3 becomes a thing, they should introduce completely new story arc and new Heroes. Hell, it doesn’t even need to be called Vermintide, why not Greentide?

What’s wrong with RV?
I think he is perfercly fine the way he is.
In my opinion RV offers the most versatility in terms of talent and weapon combination.
At other characters you either get weapons that are under or overperforming which isn’t the case with RV.

I can’t tell if trolling or not

The only strong thing about rv is fire bombs on ult, IF your team lets you have it. Grudge. His passive scales super good with higher difficulties, which is bad on lower difficulties. If you don’t take 30% ammo you cannot spam shoot. If your team takes your ammo pouches you don’t get ammo, if you snipe or team snipes a special out of bounds you don’t get ammo, the percentage to dupe healing is super bad and basically useless, i don’t think i have ever hit the dupe on his passive. He always uses the same talents. Ah yes And crossy build is pretty good aswell.

I hope you didn’t think rv was good just because of grudge build on cata.

Edit: this is the general issue with him, didn’t go too much into detail

I don’t see how a buff would fix any of the other points you suggested?
If anything the ammo problem - I assume you are suggesting to give him more ammo?
Because this could have the opposite effect - if you overbuff him it’s just going to be another ranged spamfest which I honestly can greatly refrain from

I still think he is fine - RV is one of the most difficulty character to learn and utilise correctly.
What’s more likely is that people haven’t found the correct way to do so.
A buff doesn’t change that

You said he has good weapon and talent diversity, while i don’t see that being the case. I don’t wanna into weapons i was more talking about the career itself + talents.

I don’t want a buff, this is why i specificly said ‘rework’ as a buff wouldn’t fix any of the problems i mentioned, except some talents maybe.

RV is one of the most difficulty character to learn and utilise correctly.

I don’t think rv is hard to use. You spam ranged, ult at horde or large packs of enemies, throw fire bomb, get mad at team for stealing ur ammo. Get overwhelmed, kite away. It’s a bit like saying bh is hard to use.

What’s more likely is that people haven’t found the correct way to do so.

I don’t really know how the problems i listed could be fixed if players just learn how to use him. Yes you can make those issues less severe if you have a helping team, you use certain talents or loadouts. But if we look at the career only it’s flawed and it shouldn’t be like that, atleast in my opinion. If you think his passive is fine and he has lots of diversity in talents then that’s great.

Edit: you shouldn’t be punished if your team decides to be toxic is a big point i’m trying to make here. Other careers can still utilise their passives even if they get bullied. Huntsman increased crit, ammo on hs. Fk aura etc. Also miniscule chance on dupe is dumb, even combined with the potion talent its bad, even if you use traits you still have rng, why not make it consistent and useable on every difficulty

There such a thing as a dwarven grenadier? Really need a trollhammer torpedo ult.

(On second thought I guess that’s just an Irondrake. Not sure I want an IB look alike now… but dawi artillery, tho…)

Well you can’t ignore weapons and just buff talents it isn’t something you can ignore.
Talents should accentuate weapons and not talents being the leading factor of a characters playstyle.

You spam hordes - yeah Doomranger build - WoW so much diversity there.

I still stay by my point - people don’t know how to correctly utilise him and I am sorry but it’s kind of apparent from the points you made in your edit.

for example throwing axes in combination with the out of ammo talent and power increase work really well, it’s one of my favourite combos in the game to be honest.
Also you are comparing 2 seemingly vastly different characters here.
FK isn’t comparable with RV, Huntsman is more accurate but still diverse in their talents.
You can’t directly cross compare Huntsman and RV in terms of their talents and make a buff suggestion based off of that, that doesn’t seem right.

I stay by my point RV is fine for me

I’m gonna be a bit direct here.
Did you even read my comment? Did you understand what i wrote?

Well you can’t ignore weapons and just buff talents it isn’t something you can ignore.
Talents should accentuate weapons and not talents being the leading factor of a characters playstyle.

I meant i was focussing on talents in terms of diversity, i didn’t wanna bring in weapons into the discussion. Yes weapons also have some issues, yes weapons need to be taken into consideration when buffing talents, i just didn’t wanna start discussing which weapons were good and which were performing a bit less.

How does taking all your pouches not equal toxicity? How does not giving you a firebomb not equal being an a&&hole, if it’s done on purpose. Maybe you didn’t encounter it yet, thats great to hear and i’m happy for you, doesn’t mean it can’t happen.

still stay by my point - people don’t know how to correctly utilise him and I am sorry but it’s kind of apparent from the points you made in your edit.

What did i say that shows i don’t know how to use him? Because i only talked about his most dmg build? That doesn’t make sense. I’d be happy to dicussus every build rv has and every gameplay decision that rv can make in every situation if that makes you happy.

for example throwing axes in combination with the out of ammo talent and power increase work really well, it’s one of my favourite combos in the game to be honest

I’m pretty sure that one is bugged. Isn’t that the one where you can keep the buff active even when you have ammo? More then 1 i mean.

Lmao that wasn’t even what i was saying?? I was saying that other careers like Huntsman and fk don’t rely on other people to make full use of their passive and other players can’t take every bomb or every ammo pouch and make that career useless and perform way worse then they they intended to.

You can’t directly cross compare Huntsman and RV in terms of their talents and make a buff suggestion based off of that, that doesn’t seem right.

Where did i make buff suggestions. I wanna ‘rework’ him what do you mean buff? If you take buff from reading my comments then idk what to say. Reworking is the best bet for rv. Maybe you don’t know the difference between buffing and reworking.

You are not even commenting on my points, just on things beside it. If you have any arguments as to why i’m wrong instead of just saying ‘you have no idea how to play him’, then i’d be happy to hear them. You didn’t even respond on why you think his passives are good choices and why you disagree with this:

Which is again, my whole argument

I am not commenting on your reply because it isn’t fruitfull and nothing good will come out of arguing with you I am afraid.
I am not the one that has to convince you of anything here also the way you write is pretty condescending and I couldn’t honestly care less.
All I wanted is people to understand classes before they suggest a rework but that seems pointless.
Asking for a substential reply is apparently to much to ask for these days.
I honestly don’t even know why I bothered to reply again because all you did was accuse me of either not being able to read properly or not understand you.
Good luck with who ever you are trying to convince here.

I just said rv needs a rework. Then you asked why? I responded. I wasn’t trying to convince anyone, you asked me why and i responded you went into argument with me 🤷🏻.

All I wanted is people to understand classes before they suggest a rework but that seems pointless.

Then explain it to me please thats what i’m asking. You are suggesting i don’t know how to play rv and are saying that impacts his flaws in his passive. I just wanna know how.

because all you did was accuse me of either not being able to read properly or not understand you.

Maybe it wasn’t worded properly but you objectively didnt understand what i was saying in your last comment about comparing careers, i pointed it out, mayhe not in the best words but still.

Good luck with who ever you are trying to convince here

Not convincing anyone, i wanna hear you explain and counter argument me as you went into argument

What I would have liked to see is a re-work of Salty’s Bounty Hunter career.

While Witch Hunter Captain and Zealot makes sense for Salty, Bounty Hunter does not. I like the gunslinger concept for the career but I think that it should have been done with a Road Warden or Solomon Kane kind of guy. Like this guy. A puritan, zealot and vigilante, not someone who goes for blood money.

To me Bounty Hunter does not work for, dangerously violent and narrow-minded but still idealistic person like Salty.

I’ll bite. How would you rework Bounty Hunter?