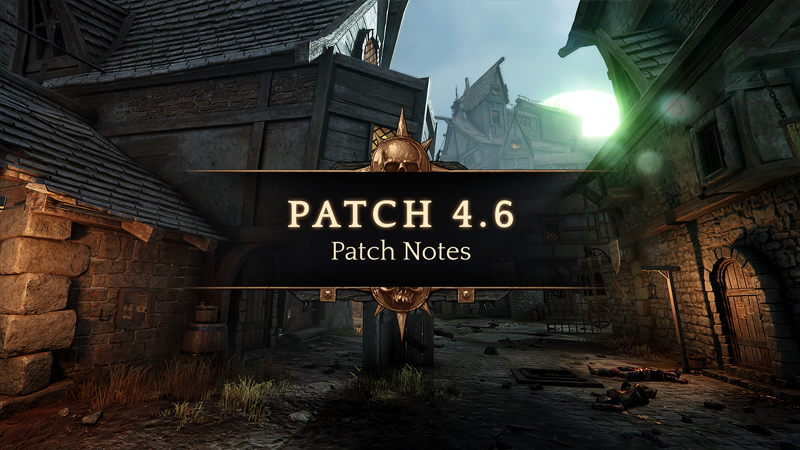 The next update for Warhammer: Vermintide 2 will go live in a few hours, and will arrive in April for console players. The update contains new Quality of Life Updates, New Premium Cosmetics, New Grudge Marks and more! Below you will find the patch notes for the upcoming Patch 4.6 on PC.

See the end of these patch notes for a list of known issues.

Sister of the Thorn

Kerillian’s latest career has undergone a bit of a renovation. The changes to Sister of the Thorn will add tools and opportunities for Kerillian to become an asset to the team in more ways than previously through debuffing enemies and controlling the flow of combat.

The goal with changing Sister of the Thorn is to address the most problematic areas of the career, make it into a stronger thematic role in combat, and lean more into the fantasy of the Sisters of the Thorn"

We felt Shade wasn’t in a good place as a niche melee career, and that she needed more emphasis on positioning as well as allowing her to get behind enemies more often as a core part of her career. In order to support different playstyles, we also wanted to create a clearer intention with her Career Skill talents.

We wanted to remove the need for certain talent combinations and free up some more choices as a result. Some talents were also very low on popularity and we attempted to remedy the worst examples. We added two new perks to get her more in line with other careers.

We have made an effort to make sure the Shade stealth minigame is a bigger part of the second to second gameplay. Players who utilize this well should notice a big improvement to backstabbing.

Well I’m going to say the thing that has always bothered me about these patch notes.

Can we get numbers on these changes plz? There are like 3 moonfire bow nerfs here and none of them have numbers to show anything.

Now that I’ve gotten THAT out of my system, I’m honestly looking forward to playing again. There are some really good fixes here. Stagger override fix especially if it works as advertised is pretty huge alone.

Heh, that is clever. No longer we will have threads about Weapon Illusions in the Waste not available in Adventure Mode

A bit bummed to see no fix to the Waystalker career skill and Bloodshot interaction. Apparently not considered a bug. Also bummed about Javelins not seeing any changes. Well, we will see how the pickrates develop in the next weeks.

Thank you for that. It was really silly that you could stack Damage Reduction to prevent the knock-down. However, in that regard I have a question concerning Grimnir’s Implacability and Warrior Priest career skill. Is invincibility treated differently or are they “just” unlimited Damage Reduction? So, can explosion knock-down still be prevented with these?

Presumably this applies to Bardin as well. A small, but fairly significant nerf to the poor drakegun. Sadge.

Glad to see not too many surprise balance notes in here. Hopefully that will come sometime soonish and we can expect further tweaks to these thorn elf and shade modifications to iron out any major issues that crop up.

Re-added Handmaiden’s mocking laughter as requested by the community

Pfah, bollocks. Who was asking for that? What I’ve… errr… “the community” has actually been asking for since forever is the return of Bardin’s “Time for a one man shield wall!” voiceline. I’m sure you’ve just mixed up the patch notes. Right?..

In any case, really looking forward to trying the new UI, integrated mods, and weapon upgrade stuff when I get home later. Curious how it’s going to feel playing alongside Sister / Shade / Moonbow now.

Aight so this is kinda contradictory of me, but, will Moonfire get more energy to compensate? I thought the main reason for the low-ish energy was to keep it from just being a superior hagbane.

But also, doesnt a moonfire that has no special tricks kinda seem like a gimped longbow? Especially given it now seems necessary to headshot to max benefits…but if it had more energy it might just be a better longbow ._.

Oh and also, it finally hit me how the new Shade ult upgrade option “Hungering Wind” doesnt seem to have any good synergy with her new fancy dodge combo stuff.

But also, doesnt a moonfire that has no special tricks kinda seem like a gimped longbow?

Infinite ammo without any talent investment is no longer a special trick?

Infinite ammo without any talent investment is no longer a special trick?

You get that on longbow anyway given you always run conservative, and if moonbow now needs to headshot and has its damage nerfed either way…

Well fair enough, its just kinda that the bow itself is so polarizing.

Either it does tons of damage with little effort and is OP or it doesnt and kinda sucks. Like how IF it now needs to headshot to work properly then it can only be a worse longbow, pretty much no matter how much it does within reasonable limits.

Could probably make ammo mean something in the future. It just makes no sense balance wise that infinite ammo weapon can do pretty much what ammo based ones can. Regardless how stupidly the current perk system/classes interact with it.

Does Shade still have her 5% unlisted Crit Chance Passive?

Does Burn stacking mean from the same source or when Bardin’s overtake Sienna’s Burns?

We have identified an issue where various hats might crash your game if you’re trying to equip them through the new “Manage Career Inventory” interface and are currently working on a fix. We recommend not using this feature to change any hats at this time.

Forgot, or does it not need to be one anymore?

Should the Moonfire have zoom now since it is very headshot dependent? I don’t know: I hated it when the novelty fell off after first week and now it is just pointless reiteration of longbow.

New UI is terrible, everything is so big and away from other elements. Looks nice but awful to use.

Some players are crashing on loading in to Taal’s Horn Keep, or interacting with a number of hats. We are investigating

We understand this is caused by having certain hats equipped. We’re exploring our options and are aiming to solve this ASAP

I like the new UI. It’s gonna take some getting used to but so far I like it.

Being able to turn off the camera duck that happened with huntsman’s ult is honestly great. It feels much smoother now.

I wanted it to be nerfed too and granted, I haven’t had much time with it since my game won’t start up again after selecting Kruber, but the MB seems to be a weaker LB after the update. I feel like they should have nerfed the damage but kept the aoe, then it’d have a niche somewhere between LB and hagbane.

Still, strongly nerfing the recharge rate would have been better than these changes imo, then it could have stayed powerful but the downside would have actually mattered.

I’m puzzled why Javs weren’t nerfed when I can’t really think of anything they do worse than LB. I’m pretty sure everyone that wasn’t already will just switch to Javs.

Looking forward to getting increased levels of javelins hitting me in the back as yhe pick rate goes up.

The voice line we really need back is Krubers ‘im getting trounced!’

I’m a bloody pincushion, that’s what I am!

This is terrible. Not being able to stack dots kills about half the staves at random. Not even the staves in need of nerfing. Can we get any explanation on why this change was made? This should have been blatantly obvious that it was a bad change even without testing.

I’m hopeful there are coming changes that make sense of this, and not that it’s just another mistake which will linger around the game for a year before being fixed.

6 Likes
next page →
Why not join the Fatshark Discord https://discord.gg/K6gyMpu