Open Letter to our players

Just stop feeding him, he was here spouting the same crap when vermintide2 released. You won’t turn his head no matter what you say.

And now imagine, they took their time and V2 has become what the same “flamer” suddenly call a great game they fall in love with… and they even want this game to become more V2 when talking about sidesystems.
But yeah, it´s nonsense… of course.

And now imagine, they took their time and V2 has become what the same “flamer” suddenly call a great game they fall in love with

you make no sense, games shouldn’t come out half baked, unplayable, and riddle with issues, but according to you thats fine as long as like 2-3 years later the game is good. huh?

Thank you for reading my bio, C icon.

Yeah after nearly 2 years of fixing it finally got to spot where it can maybe handle 1/3rd of left 4 deads playerbase. (now 5 years later its still managing only that)
I would hardly call vermintide2 perfect or a good example of a game for darktide to mimic development wise but each on their own i guess.

A short apology, a further delay for content, and a suspension of cash shop items. Do you even comprehend how insulting it was to the community that you had a cash shop at launch? Of course you dont.

You thought that it was acceptable to launch the game with 4 classes whwn your previous game had 15.

You said we would have the ability to target specific items through crafting to show that players time was valued. Turns out that was a flat out lie. Vermintide 2 has a better crafting system. You could have copy pasted that like you did with animations and so many other things, but you didnt. There are players to this day thay havent been able to run the setup they want on the character they main because of RNG.

The “This time will be even better because we brought a famous warhammer author to write help with our story” lie. What story? Outside of the tutorial there isnt a story. There isnt even the loosely tied reasons to go from one mission to another than the previous games had. Let me guess you were saving that for paid DLC and cobtent patches after launch, just like the rest of the features thar should be present at the launch of a game.

This entire project feels like you handed V2 over to the interns and told them to make a conversion mod. At this point there are mods for single player games like skyrim and mount and blade that overhaul their games to the same degree that this game is different than vermintide 2.

They go on to say that launch fay featuees will be added over the next few months. Is this a joke? What did you do with all the preorder and cash shop money you dont deserve? Why didnt you just delay the game when multiple core elements that were supposed to be there at launch didnt get finished in time. Over the next few months means you didnt even start making these systems during development but let your team advertise them as features.

Youre in this one for the long haul if you want to salvage this Fatshark. I hope youre prepared for the kind of No Mans Sky level of corrections and support that this disaster of a game needs before its actually worth purchasing.

First off, players have waited a very long time now to receive such a thing. This should have been done sooner in order to quench the ever flowing negative reviews, however, I am glad that it’s here; better late than never, I suppose. Additionally I am uplifted to read that this piece at least delivers on what we’ve all been requesting: communication. Part of the problem that games like Darktide fail on is no communication on top of the product being faulty. My patience drops significantly with a bad launch when the developers intentionally avoid confronting their community - a community mind that’s been with said developers since Vermintide.

Suffice to say, this piece is a step. Congratulations on making the step to addressing your community. Though, I do not envy the work that you’ll have to perform to bring this game to the standard that Vermintide fans have come to expect.

If you stay on the path, Darktide will become a fantastic game, that’s the hope anyways.

Also showing some kind of humanity when they actually show their good will isn´t much to ask for.

You’re right on that one, but they didn’t show good will, they blathered on with more PR blah blah, not a word of an apology, but rather an “our intentions were good”, after lying to the press and the players for months.

No amount of shilling on your part will change that.

All I want to know is two things, when the ‘progression siloing’ is being taken away along with the mission selector.

Vermintide had effectively the perfect cross-class progression with shared curios and crafting resources. Considering our paid currency is account bound there is no reason why crafting materials and dockets can’t be as well. Likewise, sharing curios should be baseline. I get why you don’t have us sharing weapons and I’m fine with that. Just let us share our resources.

There is also no reason why the missions randomly appearing can’t just the ones with secondary objectives and modifiers while we can pick standard missions with no modifiers whenever we want.

Steam said to me> 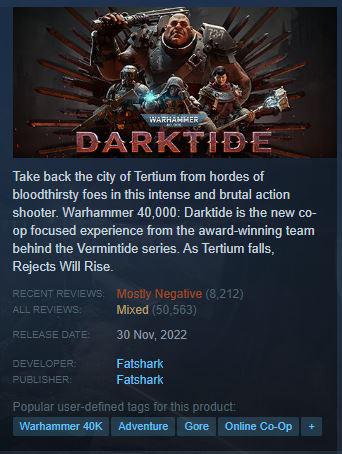 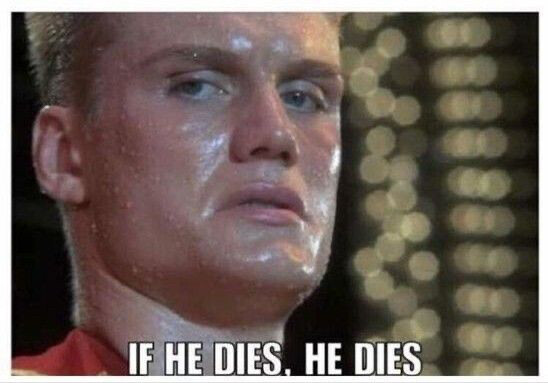 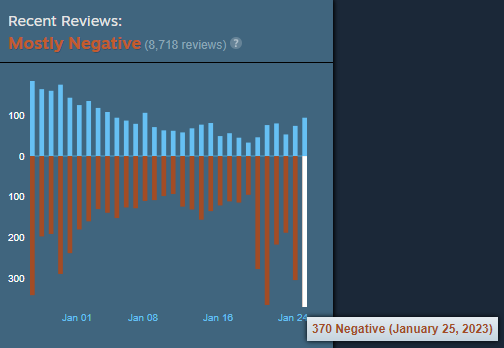 But that was back in Vermintide, that had obviously changed by Vermintide 2 to become the core philosohy of the games and even more so in Darktide, so how they absolutely failed to stick to it flappergasted us all.

As much as I don’t like the state that the game is in I also don’t like the tone that many, including myself, at times use. Calling for people to lose their livelihood is uncalled for. So is name calling or any type of personal attack.

No-one has to put up with game companies shipping unfinished products, but the discourse can be had in a civil way. I will not make any excuses for them. I don’t consider shipping broken titles even remotely acceptable.

Game development takes time and this will take months to fix. So yeah, they blew their chance to release a polished product to glowing reviews. My guess (and it is only one man’s guess) is that they had no choice due to fiscal reasons.

A refund option would be really welcome.

Whilst you make some points, the cynic in me says the xbox version will be ready just in time for Christmas sales. Just like the PC version was ‘ready’ for the 2022 Christmas revenue.

I wonder if shared resources is part of that rewarding progression loop.

you can try refunding on steam, and show them the open letter and explain, steam should bite

Talk is cheap, and corporate form letter apologies aren’t worth the 1-ply they’re written on.

you can try refunding on steam, and show them the open letter and explain, steam should bite

I have close to 70 hours in this game and I have enjoyed it with my friends. I have absolutely gotten my $40 worth. I may not stick around, and I will never buy a FS game at launch again no matter how much I like their gameplay and their previous games.

Quite frankly, playing this game for tens of hours and then asking for a refund is disingenuous. You could, however, make the case that shipping an unfinished game is also disingenuous and I have no good counter to that. Two wrongs don’t make a right.

Thank you, this answers my worry about working on the console ports and more cosmetics (cash grabs) over improving the actual current state of the game. Tencent would want the former, but i’m glad to see you convinced them that the game is not ready to milk. This decision does help restore my faith.