Open Letter to our players 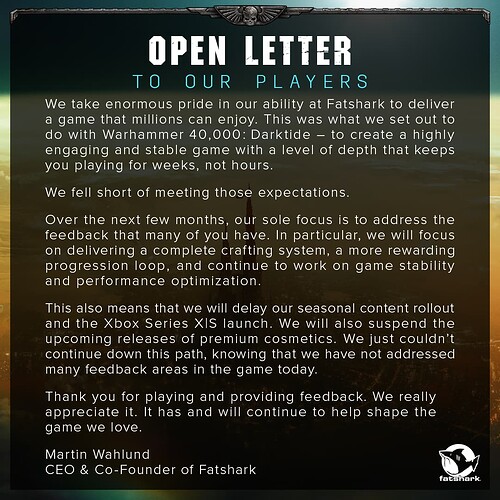 We take enormous pride in our ability at Fatshark to deliver a game that millions can enjoy. This was what we set out to do with Warhammer 40,000: Darktide – to create a highly engaging and stable game with a level of depth that keeps you playing for weeks, not hours.

We fell short of meeting those expectations.

Over the next few months, our sole focus is to address the feedback that many of you have. In particular, we will focus on delivering a complete crafting system, a more rewarding progression loop, and continue to work on game stability and performance optimization.

This also means that we will delay our seasonal content rollout and the Xbox Series X|S launch. We will also suspend the upcoming releases of premium cosmetics. We just couldn’t continue down this path, knowing that we have not addressed many feedback areas in the game today.

Thank you for playing and providing feedback. We really appreciate it. It has and will continue to help shape the game we love.

we will focus on delivering a complete crafting system, a more rewarding progression loop, and continue to work on game stability and performance optimization.

Thanks but this should of been there on launch.

Jesus. All that time to simply get what was announced at launch.

Im surprised it doesnt come with an option to refund.

Welp. that cements it.

I do have a few questions if possible:

I don’t really expect any answer, but I still would like for there to be one

Thanks but this should of been there on launch.

When someone screws up, admits it and owns it, you shouldn’t bad-mouth them. It doesn’t help.

We all screw up, and there’s no take-backs in real life. Let’s see how this goes moving forward.

They had it and hated the system so they redid it, instead of giving us a poor system on launch they paused it and still gave us the game. I’m not mad about it they acknowledge it and are working to make it better, honestly I’m cool with it.

This also means that we will delay our seasonal content rollout

Big oof. Not much to look forward to for those of us who were fine with the current loop.

Also, by the time we get the game that was promised, the game will probably be at 50% of the cost.

You can scrap the crafting system entirely and go back to the drawing board, because it f ucking sucks thoroughly.

No more of the RNG bullcrap FatShark. No more.

I do look forward to coming back and seeing the new changes ahead, but for now I’m kinda bored. Nice that things have been finally acknowledged though.

Over the next few months…complete crafting system

I’ve been a passionate advocate and defender of FS and the game so far, and continued with DT when all others in my group have dropped one by one. I’ve been a supporter of Fatshark since VT1.
But this is honestly the first time I’ve felt genuinely let down by an “update” and by the developer.
It comes across that the previous “We will be more transparent with our customers!” announcement was just performative words rather than genuinely holding themselves to account.
And now in response to countless outcries for FS to explain what’s going on, or to break the radio silence, the response is just “Oops, our bad! We’ll look into that over the next few months!”.

I feel that holding back seasonal content won’t help with retention either. It’s nice to have things to look forward to, and fresh missions, maps and such keep folks interested, WHILST waiting on all the “Should’ve been there at launch” features!

I guess the popular 40K quote of “Hope is the first step on the road to disappointment” isn’t wrong.

(Meant as a response to Martin’s letter, not to Catfish, who I get the feeling has been non-stop firefighting since joining the team!)

Fair enough and thanks for the update. I’m glad to see that you will focus more on crashes and performance optimizations too.

For my 2 cents I just want to say that you shouldn’t be afraid of just rolling out fixes and updates regularly. Even just bug fixes on weapon blessings and stuff like that coming in regularly is better than no updates at all.
To my eyes that leaves the impression that stuff isn’t standing still and that you guys are actually working on stuff, and that more is to come.

On another positive note I’d just like to add that the experimental build that was released not too long ago actually did wonders for my fps. In some cases it bought me up to 40 fps more, but usually the gain is in the 15-30 fps range. I was positively surprised about that. Now I just hope for more bug and stability fixes soon, in addition to more content.

Lmao you act like these guys dont have 2 almost identical games under their belt.
A company with this much experience making the same if not worse mistakes again and again doesn’t get a pass the 3rd time around. Myself and the community will stop “bad mouthing” them when they release a finished, bugged free product that isnt riddled with microtransaction and rng slots.

Yeah, that was another downer for me too.
I’ve kept playing just for the enjoyment of the game, but it does need fresh content now and then. Holding back this stuff is doing to cause yet more players to drop it

Let me preface with saying I enjoy the game, have been playing since beta, and want to keep playing, even with a open ended timeline for fixes that is now being promised, but I believe fatshark should have learned from its other IP’s and Developers around it. There have been too many games that have released and failed in this same way.

Im glad theres a promise to do better but please dont let your fanbase down again, dont be like other developers who give empty promises.

Yeah, that’ll pretty much kill it for me. I feel like they’re redesigning systems for people who already quit and holding back content because of that so those of us who stayed won’t have a reason to stay. Weird choice.

OK, acknowledging that there are problems is good. It is unfortunate that it had to come to this, but one has to be pragmatic and “a few months” is more than reasonable and realistic considering everything.

Just one question - in the meantime, do you expect to release patches for non-design related issues, especially GPU/network related bugs?

I am a big fan of this game, with alot of hours played and I am pretty fine with the delivered game (I marked it as “early access” by myself - so I am fine).

But this letter tells me, that you will work on a system you promised to roll out completely last year?
And you need 14 Days after holidays ending to create a 5 minute reddit statement that everyone predicted? - Cmon, really?

The biggest sadness for me is: no new cosmetics. I am a big fan of the cosmetics and was really hyped by the stuff you delivered. And now - because a very loud minority (that will not even buy your skins) - I dont get new outfits… v.v SAD

You do such a great job with your tide games - why are you so clunky with community communication?

I am pretty fine with the big problems you got at fixing and developing, but your communication is sooo sad. Please hire a PR-Stuntman (manager could not be enough). And please start talking with us.
Big players like Blizzard once got a perfect communication with the players. Since Activision they stopped it and the glorious blizzard started losing its shine to the frustrated company they are these days.

TALK TO US - WE ARE HUMANS.