Mauler Skips Getting Up Animation and Strikes Back

Hello!
One of many good things in VT2 is its consistency. Mauler used to skip their animations back when we were young and they still do it.
Steps to reproduce: 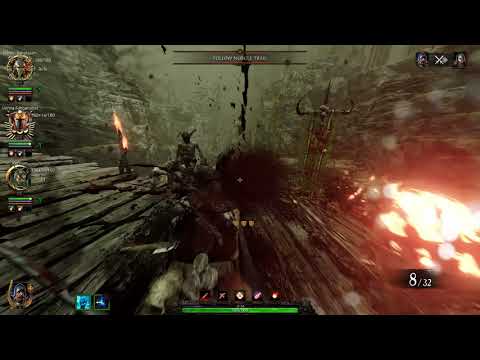 I think it happened when you over wrote the first stagger effect.
I.E you do big stagger (they stagger) you hit them again with a smaller stagger (they not as staggered) and the code cant handle it, and instantly put them where the game thinks they should be based on the new, weaker stagger.

Exactly this. FK charge knocks them over but if at the same time something else does a lesser stagger it overrides the heavy stagger. Chaos Warriors regularly snap back their feet and boop you.

Truly the bane of FK. I really hope this is something FS gets round to dealing with before V2 is abandoned.

Really old bug. Has been reported multiple times too:

Issue Summary: When enemies are knocked to the ground by a large amount of stagger (such as Foot Knight’s charge), if left alone they will take several seconds to stand back up. However, hitting the enemies while they are laying on the ground with any attack or push will cause them to switch animations to the lower amount of stagger from the new attack - that is, they will instantly go from laying flat on the ground to standing up and only lightly staggering. This not only looks bad because the …

Upon request by @Mentis, I looked at the stagger interactions for Kruber’s charge and a weapon. Essentially, if you hit an enemy while they’re flying from Kruber’s charge, they will get a shortened stagger state and be on their feet instead. Doing it with a melee weapon was extremely difficult but I was able to reliably reproduce the result with a ranged weapon. The following video demonstrates this bug and interaction with numerous enemies(armored enemies are much easier to replicate the bug wi…

FK Valian Charge: its stagger effect can be overwritten and and "canceled" by another source of stagger Vermintide 2 - Bugs

Another source of stagger can overwrite and cancel FK Valiant Charge’s stagger. The other “source” can come from another player (ult, weapon, etc etc) or from FK himself. This can be easily tested. Pick up FK + a shielded weapon (just to make the test easier, but this happens with every source of stagger) and fight a Chaos Warrior: if you use Valiant Charge against the CW you knock down him at the ground for some seconds; BUT if you stagger the CW with a shield’s bash and THEN you use V…

Its kind of horrible. Valliant Charge is bugged for as long as the game is alive and his Talents either make him an averagely well frontliner, or a worse Merc. There are hardly any distinguishing factors between Knight and Merc. Both have Attack Speed Talents, both have minor Damage boosts, which both are hardly triggerable on Monsters, or bosses. Both have the ability to gain DR. The only distinguishing factors are the THP generation and Mercs passive “Hitting the Sweeet Spot” which makes him …

Knocked over enemies sometimes bounce up instantly when hit, skipping over the need to climb to their feet. I noticed this with northmen frothers in particular (Legend and Cata), after knocking them over with shields and other high stagger weapons (usually opportunist). Basically, one player would bash them to the ground - if nobody attacked them they’d slowly climb back up to their feet. If someone pushed and/or attacked them, sometimes they’d instantly just glitch back to a standing position…

How to recreate that? Play Knight. Press F to Forfeit your Battering Ram self-esteem. I could post those all day long, but playing with 40 to 50 FPS while recording is no fun at all, even so, my righteous fury about this problem existing for years is nearly high enough to just post those every day. Its not even a rare occurrence. Those got taken back by back on the same run.

My favorite topic to rant about!

Imagine having a career that has one gimmick it is supposed to pull value from, which is knocking enemies to the ground and making them waste their lives by standing up again. Now imagine that gimmick being broken and ignored for YEARS, because the knockdown gets overridden by even light attacks!

Top it off by releasing a monster modifier that makes it impossible to yeet monsters into the abyss.

If stagger overrides cant get fixed, or whatever “cant” wants to be translated in corporate lingua, rework the career skill. Meanwhile, reword Valliant Charge to what it actually does:

“Press F to knock enemies down, but don’t touch them, or let them be touched by your teammates. They will teleport into stand up, or even attack animations immediately!”