Lucius Mk I Helbore Lasgun fails at almost everything it does

I was desparate to like this weapon. I tried. Looking at it, the role it is supposed to fill, it should appeal to me - but I hated it. It has several key problems.

You are shooting yourself in the foot if you use the bayonet, even though I wanted to because it would be cool. “STRAIGHT SILVER!”

Please, by the Throne, get this weapon to a tech priest.

32 Likes
Lucius Helbore Lasgun Needs a Reimplementation & Buff
Lucius Pattern Lasgun doesn't feel great as a gun
A compilation of the main issues I have read on this forum and the most requested fixs for them
Lucius pattern las
Please improve the Lucious Hellbore Lasguns
CapnPipsqueak November 19, 2022, 4:56am #2

Good points. A lot of this speaks to why I went back to the Kantrael. The Helbore is a great tool for just ending specials but it’s really lacklustre everywhere else. The slight delay on uncharged shots makes it difficult to use, and the ironsights feel like they’re more of a hindrance than a help.

You can ‘charge’ the bayonet jab for more damage, but I think it’d be better to add a parry and riposte mechanic like the Catachan sword has. That would make it really good for dealing with single enemies that get close enough, and a way to block those enemies without having to switch to your melee.

I agree with this, with the added issue that the charging visual effects occlude not only your iron sight’s front post (and thus your aim) but also your entire target. Throw in the fact that tagging enemies puts the big red skull DIRECTLY OVERLAID on their head (their weak spot) and you have a recipe for a thoroughly ineffective sniping weapon.

Thank you for picking up on this - I completely forgot to mention the overpowering visual effect on the muzzle completely obscuring the sight picture behind the front post and blinding you just before you need to fire… That alone on a weapon with ironsights makes it unusable.

The bottom line is: It needs a mid-range optic, and for uncharged shots to fire without any delay.

I agree, it’s meant to be the sniper variant of the lasguns it feels like, with the charged shot and added damage making more hit more impactful. But it’s so hard to aim with due to bad iron sights and the obstruction when charging a shot.

• Charging: I found it’s interesting if you charge one shot while aiming and cancel aim but keep holding “fire”, when you aim again it starts charging right away. The effect is like you use right mouse for aim and charge and “free” left to fire.

Hope you understood what I meant.

Iron site is 100% horrible. I expected us te be able to adjust it

i tried it for a round , also it uses ridicules amount of ammo with…no bonus , i tried white lower level las gun ageinst it and while it deals more damage , there is pause between you hitting fire and relesing it and you actualy shoting

and miniscule more damage not compescates for 0.3-0.5 delay in shot , when i used it i found…that other classes were killing specials becouse of delay while with standard normal lasgun i could fire 2 even 3 times before charged one would charge first shot

if it was sniper role it could be useful for 1 shoting elites , maybe even having small “pierce” cover and walls ability , but now it feels like worst gun in the game atm

You guys have the wrong idea about the gun. While the ADS and ironsight + sway absolutely suck and need to be changed, it’s actually more of a close/medium range option, since the charged shots penetrate armour, which the kantrael does not do. You can down a mauler as fast with charged chest shots from a helbore faster than any other lasgun that you have to hit the head to even hurt them with.

To clarify i use the MK 1.
I also feel the awkward delay when trying to spam fire.
The charge shot is really bad DPS wise and you often don’t have the time to aim and charge as you get overruned by melee focused enemy’s.
I found myself far to often getting out my melee weapon with this one as for example the Laser Pistol.
I don’t know if you can technically fix the issue with the awkward charge trigger but maybe have the Hipfire be non chargeable and the ADS charge able.
Or have Bayonet weapons double act as melee weapons and give them more power.
Or have the special attack switch from Shooting mode to Bayonet mode and give the weapons a full attack pattern of light and heavy attacks.

I agree with the OP that the gun needs some rework as it does not seem to fit well and is outperformed by the basic Las Rilfe. The niche use of charged shots pales in comparison of the fire rate and often i fail to down a Charging mutant with it where by a Kantreal does short work of them.

Another thing i noticed with the bayonet attack is that when you spam the specialattack button and hit enemies the screen starts to shake really bad. I think its a Zoom effect that should convey the thrust motion.

Also i noticed it does not make any difference if you sprint attack with a bayonet or not - always the same DMG.

I was really looking forward to the Lucius, but I too was very disappointed when I got the MK I. It chews through ammo, the ironsight in combination with the energy+smoke when charging make it hard to see the target, and worst yet it is very vulnerable to suppression (more than any other gun I’ve used).

Surprisingly, I did like the Lucius MK II better. It may not be as good as an MG XII, but it has better handling than the Lucius MK I in all areas. It has less damage per shot (and lower ammo cost), but it charges up very quickly so I felt like I could put out strong shots more consistently.

You guys have the wrong idea about the gun. While the ADS and ironsight + sway absolutely suck and need to be changed, it’s actually more of a close/medium range option, since the charged shots penetrate armour, which the kantrael does not do. You can down a mauler as fast with charged chest shots from a helbore faster than any other lasgun that you have to hit the head to even hurt them with.

I legit did not know this. I thought the charged shot was “big damage and more dps for more ammo burn”. The weapon properties really need to be explained better.

I got a mk2, and it uses a thin bayonet and seems to have much faster charging, though that could just be the one I got.

Other then that, totally agree.

The fact that it is a charge weapon is what kills it for me.

Unlike the plasma gun, it does not have the stopping power to justify having a charge in the first place.

It would have been much better had it been powerful non-charge single shot with a delay between shots.

If that cuts into the Kantrael then just reduce the delay between shots on that gun instead.

If you want to make a charge lasgun, make it something like the Ryza pattern instead.

The two most important thing that i think would benefit the weapon and make it not only fun, but usable, without impacting its balance much is

-Scopes or GTFO.
-There are awkward delays to charging and/or rapid firing that make it feel unpleasant and inefficient to use.

All issues it faces:

Bayonet under performing in role/performance
Bayonet lacks heavy attack, and bayonet charge does not give any extra damage.

ROF is nonstatic
sometimes you can do rapid fire with it, sometimes it decide to charge up shots, even if you do quick taps it does not work properly.

Bad Aim
some photos are included that shows how you cant even see a thing, not knowing where is the iron sight is. 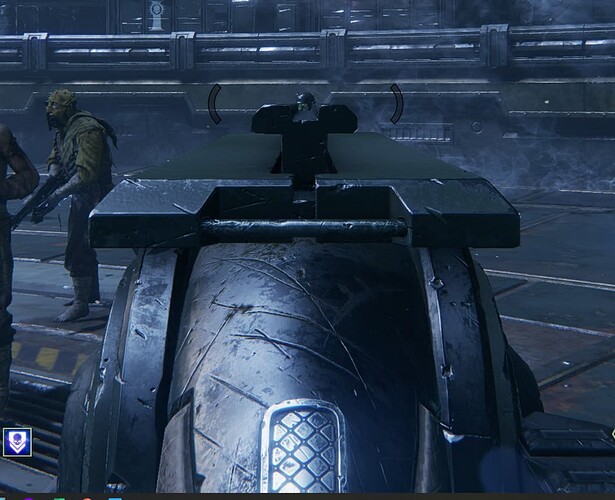 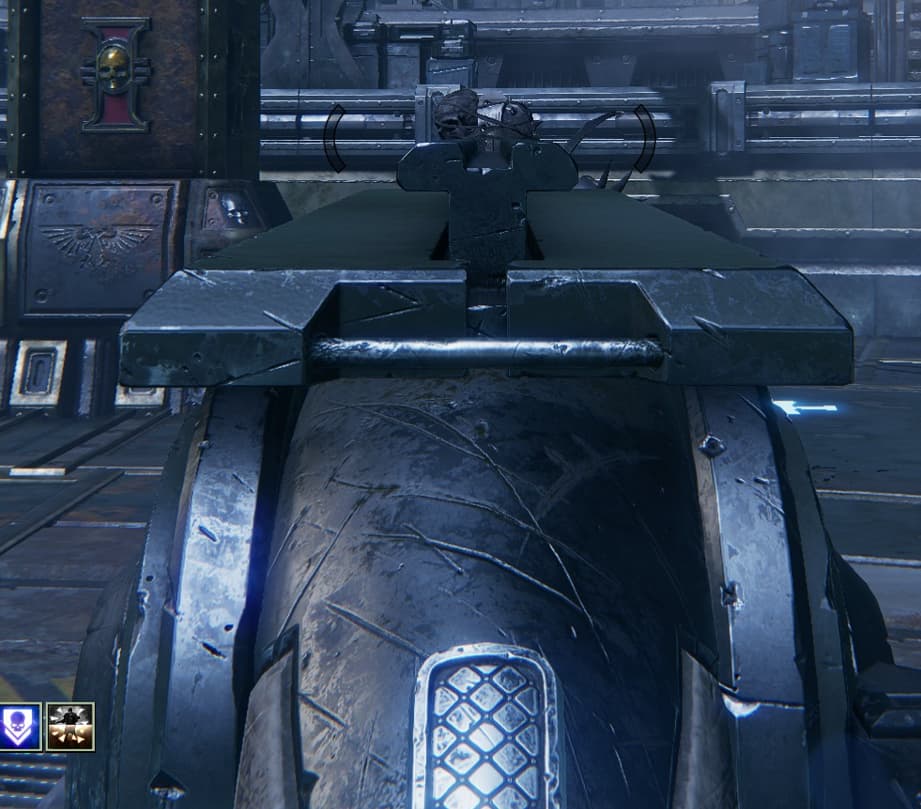 Honestly to fix the gun just remove charge completely, up the base damage to closer to what full charge would be and slow the rate of fire a tad more to balance that all out,otherwise there is zero reason to use this weapon, which makes me incredibly sad as it was the gun i was most looking forward too.

The charged shot should be a weapon special. But then you lose the bayonet.

So yeah, I agree. Make it a slow firing, high damage and penetration shot that can’t be charged. Unless they can fix the awkward ROF issue at a minimum.

I 100% agree with this post. Most of these have self evident solutions but I propose the following as resolutions to a few items as key fixes that will improve its utility:

This is another huge gripe with the weapon, it feels so awful to have to wait for this lag time similar to the bolter when the damage and performance isnt even CLOSE to the level of power the bolter has