Legend is the new Recruit

Not to boast or anything but when you have a couple of hundred hours it shouldn’t be hard to carry.

You probably shouldn’t boast about that indeed because a couple of hundred hours will likely get you laughed out of the room when compared to a lot of the players here. I’m approaching 1000 myself and probably most of the people who’ve posted on this thread have more than that. My point here isn’t to compare hours, just that statement came across kinda weird. Also I said pretty much the same thing so I’m a little unclear what your point here was.

Anyway, good to hear you’re not being aggressive in game. At the end of the day it’s about having fun killing ratmen and heretics, the refreshing thing about Cata for me is that almost nobody seems to care whether you actually win or not. They’re just there for the joy of the game. Randos be randos though, and sometimes carrying is a lot of fun. Unless other players are being actively toxic I find it’s a fun time regardless of their skill level.

Okay what is it about" that’s something a carried Player would say" and “youre the one that isnt very strong”
Are you so hurt in your ego that you can’t live with the fact that there are also other Veterans out there?

I have almost 1k hours, played all weaves, cata twitch, cata fow etc. Why do I need to prove that I am easily able to carry legend? Like come on. So pathetic actually.

Okay maybe shade died 5 times, I had to kite multiple times in the bossfight as we killed trash and nobody except me touched the boss. Ofcourse it took a while. The exaggeration is used to describe how it felt like. Shade literally got rezzed and died again. Rinse and repeat.

I don’t get your point with the teamfight thingy.

And yes Legend is hard as the teams i played with would wiped everytime when I wouldn’t have rezzed them. Xd. Ofcourse it’s not hard for a veteran. But for them it’s hard

You probably shouldn’t boast about that indeed because a couple of hundred hours will likely get you laughed out of the room when compared to a lot of the players here.

yeah 1k hours, and I will get laughed at. Sure…sure. And i literally said “Not to boast”

And you follow up with this? That’s literally why I said “a couple of hundred hours” as I don’t feel the need to compare dic.k sizes.

The way I see it, this is not the best place to vent your rage, go on reddit.

I don’t understand why you’re getting so upset. You do remember that we ALL started at level one at some point, right?

I played this game during the Closed beta test in February 2018 and Recruit was way overtuned and also because Fatshark forgot to add Hero Power into the game so everyone lost every game til about level ten. Literally no one got upset. The game was new, it was shiny, and we all were having fun.

It’s really pathetic that I have to explain this to you but once you hit Level 30 then Champion becomes a walking simulator. It’s natural for people to move up to Legend because Champion no longer feels like a challenge. The same concept goes for Cataclysm.

If you are as good a player as you say then Legend should be a cakewalk whether you have a good or bad team. I can solo Legend and I don’t sweat. I know what I’m doing and I get my team back up. It’s literally no big deal.

We were all scrubs at one point.

Ok maybe your wording it just weird. The way you said that sounded like you did indeed intend to boast, but apologies if I’ve misinterpreted you. You’re getting an aggressive response here because your tone is aggressive and somewhat arrogant to begin with. I wasn’t trying to pour fuel on the fire, just highlight the dissonance in what you were saying.

If what you said above about weaves, Cata FoW is all true you sound like a very strong player. It’s unusual to see Cata regulars complain about Legend, so I and I’m sure quite a few others here were a bit suspicious you were just ego stroking beyond your ability.

Whatever though, this thread has gotten hostile enough, I have no desire to contribute to that nor did I intend to insult your ability. I said my piece on the main topic, I’ll leave it at this and hope everyone calms down, yourself included.

Yo my dude glass houses and all that. I’ve seen quite a number of your posts around here and you are by no means consistently pleasant yourself, regardless of how amiable the person you’re responding to is. Also I strongly disagree that being unpleasant to someone because they’re being unpleasant is warranted, and it certainly doesn’t achieve anything other than a flame war. The rest of your advice in that post is solid though

Can everyone in this thread please chill? OP came across kinda douchey up front but most of y’all are just throwing fuel on the fire here. There could have at least been some decent discussion here about how the game funnels most of its players into Legend and how that isn’t entirely healthy but I’m not sure there’s even anything salvageable in this thread at this point

hmm I see, maybe i sounded arrogant or angry. Yeah maybe it’s best to close the thread then :o

haha but yeah, probably it’s hard to believe that a cata player doesn’t enjoy legend. (i mean i am not struggling, but I dislike that you cannot allow yourself to get disabled once, and that happens even to the best players)

I am curious what your intention with the thread was to begin with. Was it a vent or were you just genuinely curious if other people thought legend has deteriorated?

What would you do to fix the lopsided difficulty wherein most players seem to hang out in Legend? Again I don’t personally find it to be a big issue, but it’s certainly not uncommon to see people complaining about the average ability of Legend players (though on Reddit more often than here, where the focus is more to give feedback specifically to FS).

I wanted to hear if others have made the same experience as me.

genuinely curious if other people thought legend has deteriorated?

yeah this pretty much

I don’t know if there even is a solution. With decreasing playerbase. Maybe it would be good to get rid of a lower difficulty and adjust it more to legend values.

I think there’s definitely an issue with how big the gap between difficulties is. Champion in no way prepares you for Legend, and Legend prepares you for Cata even less. I’d agree we could afford to lose a difficulty and tweak the remaining ones to be a little closer to each other. It’s so late in game’s lifecycle though I’m not sure there’s much that can be done at this point without disorienting a large portion of the player base.

I’m of the opinion the loot progression is probably the most flawed part of this game. Ideally there would be a way for players on all difficulties (or at least as low as Champion) to work towards reds in a more consistent and metered way than grinding full books legend and hoping RNG favours them. It’s fine for higher difficulties to give better rewards, but at the moment if you want reds at an even passable rate it’s play full books legend or bust. Meanwhile people who are actually good but don’t have all the reds they want are encouraged to continue spamming a difficulty they don’t find challenging rather than move onto Cata. This seems incredibly unhealthy to me.

You can’t get better at Legend without playing Legend. IF OP somehow expects players to be Legend capable without people being in Legend, making mistakes and learning the hard way then I’m baffled as to how players are expected to improve.

There could be an argument that the power boost to loads of weapons and builds with the most recent BBB has made far more weapons and classes easier in Legend, and therefore also makes Champion even easier which pushes players up into Legend. That’s fine and you can expect them to still make Champion Level mistakes while they adjust to the more punishing hits and more frequent specials at Legend.

The good news is, if you really can’t stand risking QP groups being lacklustre you can simply drop out and get another game really fast. Or play with bots.

Staying in a group that is infuriating you and then moaning about them is a massive self-own as you could’ve avoided them after the Shade got downed the fifth time, or at the end of the first run failure. 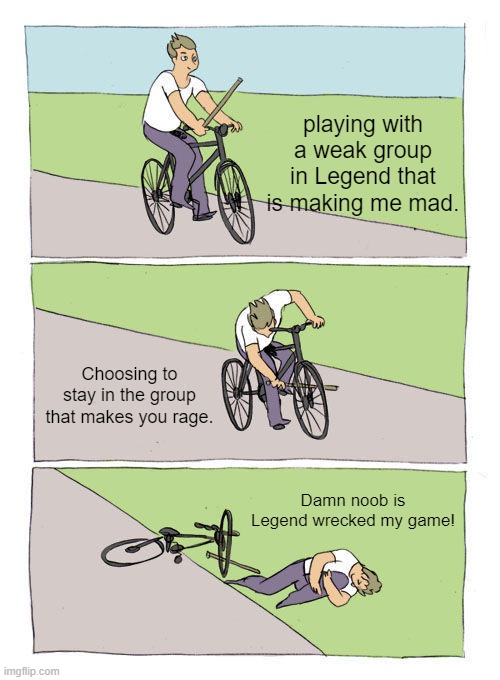 There’s potential for discussion to be had here, but keep it civil onwards please all.

I’d agree we could afford to lose a difficulty and tweak the remaining ones to be a little closer to each other.

How do you remove a plug and get the remaining ones closer at the same time (under the assumption that the current difficulty “range” from Recruit to Cataclysm stays the same)?

You’re correct. That point was kinda tangential and doesn’t stand up now I think about it more. I stand by everything else I said in that post though.

The discussion here is more along the lines of (and it’s as old as the game itself);

Tutorial, Recruit and Veteran don’t prepare you for champion, and Champ certainly doesn’t prepare you for legend. there are so many mechanics players in Legend simply don’t have a clue about - the most recent one is people not drinking Bardin beer because they think it’s pointless. I’ve spent time coaching people about dodging, how to stagger things with a shield properly, Using Krubers charge to stun hookrats, using Unchained Fuel to the Fire can be better than the bomb balm Talent, Avoiding getting grabbed by the Spawn by dodging left instead of backwards and so on.

All BASIC STUFF the game doesn’t tell you at all. If players aren’t telling each other, how are people supposed to know?

Problem comes when someone is level 35 and has been for quite some time so they resent advice, even as they swig their fifth health potion in as many minutes as a Zealot.

barely anyone knows anything about breakpoints, stagger etc. and probably no one would at all barring a handful of people if it weren’t for community efforts at discovering, learning and producing resources to share with people. Most of the knowledge in this game is community made rather than provided by fatshark which is kinda…not how it should work for basic things like “what does 10% power vs skaven do for me?”

Whatever happened to game guides? I used to have a stack of them back in the 90s