Bretonnian Longsword and Shield stab is shorter than slash

I noticed today that the stabbing attack you do off of the shield bash with the Bretonnian Longsword and Shield weapon is less than half of the range of normal attacks with the weapon which feels… wrong? For a stab anyway. Obviously if this is intended so be it but I know a while back Kerillian’s greatsword had the same issue where the stab was short for some reason and just wanted to bring attention to this.

It’s actually so short that the viewmodel for the sword can poke into the target before the hitbox does.

I’m not saying this is wrong at all, but whenever you’re testing hitboxes, I would recommend always doing so in a map or FoW. Hitboxes are very jank in the keep and often not accurate to in game. There is also a mod for visualizing hitboxes that is very helpful.

In September, this bug - feature by now, really - will be at least two years old!

In September, this bug - feature by now, really - will be at least two years old!

It isnt the oldest one either

Did they ever fix the multiple wonky interactions with Tzeench twins?

I just thought it would be a more consistent place to show it off, I bring it up because I was noticing it ingame. It’s just easier to showcase without the enemies moving y’know?

Yeah I get it completely. It’s definitely shorter range in game as well. I was just letting you know for future testing that the keep can break hitboxes and there is a mod that visualizes hit boxes.

You can spawn enemies and make them either move as normal or stand still using this mod called ‘Creature Spawner’ on modded realm. Highly recommended if you like testing out stuff. 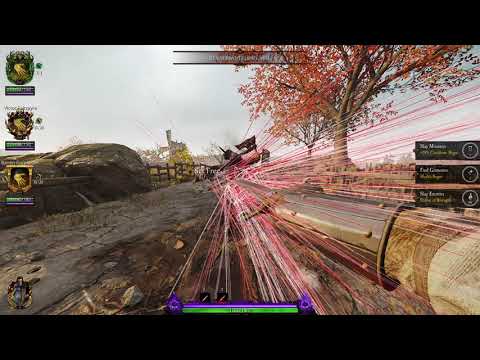 Yeah, I also brought that up here, and as you will find there are a few threads like this.

All of them are seemingly acknowledged, but it hasn’t been adressed thus far.

I think, in a game where weapon hitboxes are basically everything when you break it down, stuff like this should be highest priority. No weapon should have wonky hitboxes, because basically all you do in this game is putting hitboxes into other hitboxes.

Yea I think its pretty telling of the state of the developers that all reworks to the game since we’ve gotten new content have been elf retooling and changes yet one of GK’s weapons he rides in with has been broken since it came out, 2 years ago. Its probably a lot easier to activate the missing frames of this attack than retool entire talent rows. Easily one of his lowest picked weapons, acknowledged numerous times but never fixed.