Assassin Rats Need Ballancing - They Grab Us In Ridiculous Places

TL;DR Assassin Rats (AR) grab us in some nonsense places like mid-air, on ladders and during alts that should negate their lunge. This is an issue because it negates our few defenses against them.

Edit: freqlectic mentioned AR that curve mid-flight to intercept us. Argonaut14 mentioned AR that attack both spawn directly on top of us and rats that spawn in the air to dive bomb us. Both users bring up excellent additional umgak Eshin tactics. Consider these added to the list of issues.

I’ve never been a big fan of enemies that can grab and hold on to you. Especially if said enemy won’t let go without the help of a team member. However, I feel grabbers in this game are fine. Namely because you can dodge them and you have more than one person who can assist you.

I have an issue with this because it completely negates the ability to dodge them. It also negates the knockback of some specials. I can’t dodge on a ladder. I can’t dodge mid-air. Additionally, certain alts should negate their ability to grab you. For example; FK’s charge should knock them back, DR’s smoke bomb should negate their grab and WHC’s alt should also knock them back.

Honestly, I would have no issue with AR if they couldn’t pounce me in the air, mid-alt (for some alts) and off of ladders. If you’ve took the time to read that or even just the TL;DR, thank you.

Hello!
I also have been grabbed on a ladder or mid-air.
But I just didn’t think anything about it.
Making you invulerable to disablers mid-air or on ladders would invite exploits.

Disablers being able to grab you through some ults is annoying but again to me understandable.
I am afraid removing such vulnerability would decrease the amount of threat from disablers a TON.

Making you invulerable to disablers mid-air or on ladders would invite exploits.

I am afraid removing such vulnerability would decrease the amount of threat from disablers a TON.

To an extent, yes. I’m not saying that they shouldn’t be able to grab you if you are just jumping around. That would certainly be ridiculous. I am more or so referring to areas that require you to jump. For example; the tome in Skittergate that requires you to jump across the ice. Eshin can grab you there and instantly kill you. Some areas require you to climb ladders - like the final area in Garden of Morr. Being grabbed there is equally ridiculous.

I think AR should prioritize people on solid ground over people on/in ladders/mid-air. I think they can make work arounds that will balance the AR and avoid exploits.

You should probably refrain from climbing activities when you hear the sound cue for the assassin. Kill first, make dangerous jumps and climb ladders later.

I thought that this thread would be about those curving assassins, that can grab you around a corner. Those are a major pain in the ass and a bit cheaty.

I was hoping this would be about the spawn-inside-your-pocket and jump you assassins. I figure most people know assassins are bugged and can leap from a commandeered gyrocopter 10k feet up and land with pinpoint accuracy on your face.

Argonaut14 makes a good point as to why this can be an issue. sometimes they ‘spawn inside of your pocket.’ I mean yeah, if you see them skittering around then don’t go. We all know that some times they disappear/reappear instantly and sometimes they get stuck. Waiting is a valid defense but if you’re in QP, who waits? I think it’s fair to ask for some balancing in this in regard, as well as in regards to Wanted (movie/comic) level curving assassins.

I was hoping this would be about the spawn-inside-your-pocket and jump you assassins.

Consider this issue added to the list of AR complaints. Eshin dive bombers can eat fat chaos spawn and die.

Assassin Rats (AR) grab us in some nonsense places like mid-air, on ladders and during alts that should negate their lunge.

Honestly, I’m less bothered by Assassins doing this. On a ladder you are vulnerable, and if you were grabbed out of an active ult it’s either ping or you were footknight.

And Assassins are the only disablers I tolerate midair grabs from, because of how they’re tracking works. Most of the time it’s because you were in their way and not because they did a crazy air maneuver (that does happen, tho).

I hate hookrats and leeches more because their midair grabs are even more unfair. An assassin rat can miss and explode against a wall, but if you jump off a ledge, as long as you don’t touch the ground, you’ll never escape from a hookrat like that. Some weird thing in the game where a hookrat grab has infinite range. Leeches can be bad about this as well. I swear if a leeche shoots from too far away I can side dodge when they attack, but if the projectile hasn’t passed the dodge frame will run out and I’ll be grabbed

sometimes they ‘spawn inside of your pocket.’

if you’re in QP, who waits?

You could be the one waiting

Like a lot of people have pointed out already, giving you a safe haven while mid-air or on ladders is probably going to generate more issues rather than the opposite. Reminds me of a post a while ago about enemies hitting you while you climb up a ladder. Sure, it’s frustrating if they’re waiting for you (cheating rats) but the solution would probably cause unwanted side-effects.

but if you jump off a ledge, as long as you don’t touch the ground, you’ll never escape from a hookrat like that.

As for issues like this I understand it’s super frustrating, but I’d say it’s intended behaviour. You shouldn’t be able to jump out of range, but rather make a habit of dodging down ledges if you have a hookrat on you, preferably sideways. The fact that you need to dodge in those situations doesn’t excuse all hookrat related grabs that bug out in different ways or the really unfair leeches that you come across now and again. 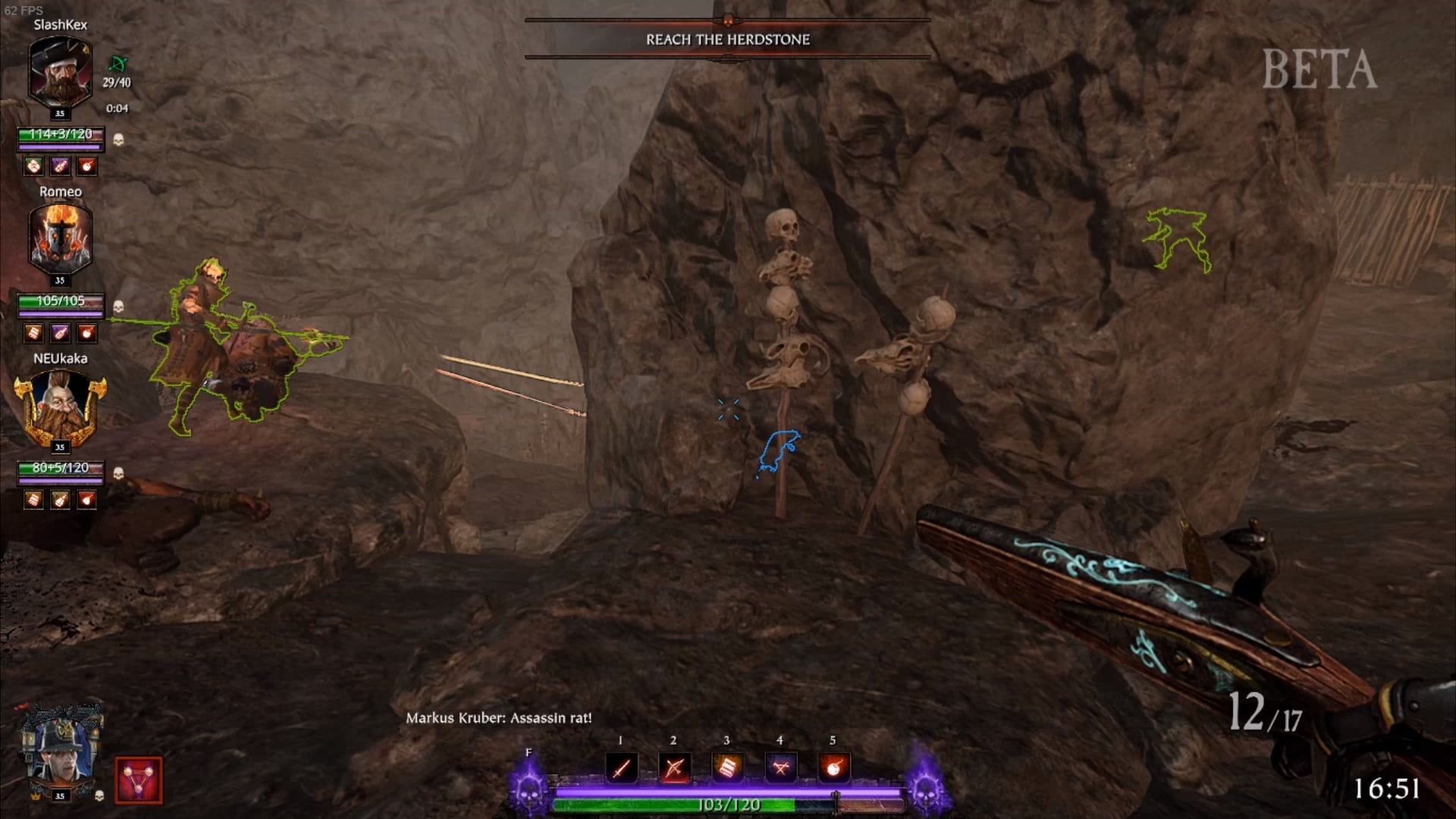 You could be the one waiting

Like a lot of people have pointed out already, giving you a safe haven while mid-air or on ladders is probably going to generate more issues rather than the opposite. Reminds me of a post a while ago about enemies hitting you while you climb up a ladder. Sure, it’s frustrating if they’re waiting for you (cheating rats) but the solution would probably cause unwanted side-effects.

Then you end up waiting and get kicked or yelled at. RIP

Sure, it could cause issues. That can be said of everything involving patches/updates/new content. Personally, I’d just rather have them look in to it and maybe produce a polished result. I will say this much; the Skaven Space Program can eat a fat Chaos Spawn and die.

I like your way of quoting, but to clarify. If you could use elevation to easily avoid hook rats then they wouldn’t serve any purpose. It’s not like it would only apply to actual drop downs, it would most likely bug them out whenever there is a slight difference in elevation between you and the hook fat.

I’m honestly bit surprised this is a real issue. How I always seen stuff like ladder grabbing is that if you commit to a ladder while assassin/leech sound que is going off then you are taking a knowing risk of being extremely vulnerable to disabling enemies. I’d find it to be incredibly stupid if you could just stay stuck on ladders and be completely immune to disablers.

My biggest problem with them is inconsistency. Be it spawn distance, delay before jumping, flight speed after jumping, sudden 180 turn around jumps, pretend to teleport away then jumping. They’re just very inconsistent and janky in a way neither of the other disablers are. Having no reliable counterplay other than knowing map spawns inside out, exploiting areas they can’t get to easily, or just relying on your team to act fast when one inevitably grabs someone isn’t that fun.

I’m hesitant to argue since the thread’s about gutter runners, but I have to ask if we’re talking about different things. I mean if you’re plunging off a cliff and are a good 10 meters away in elevation, I think it’s completely illogical for a hookrat to be able to get you with an invisible go-go-gadget arm that rubber bands you back up a cliff. Having infinite range on grabs like that is just overkill.

Problem is that dodgin off ledge or jumping off ledge isnt any different, you still will be grabbed 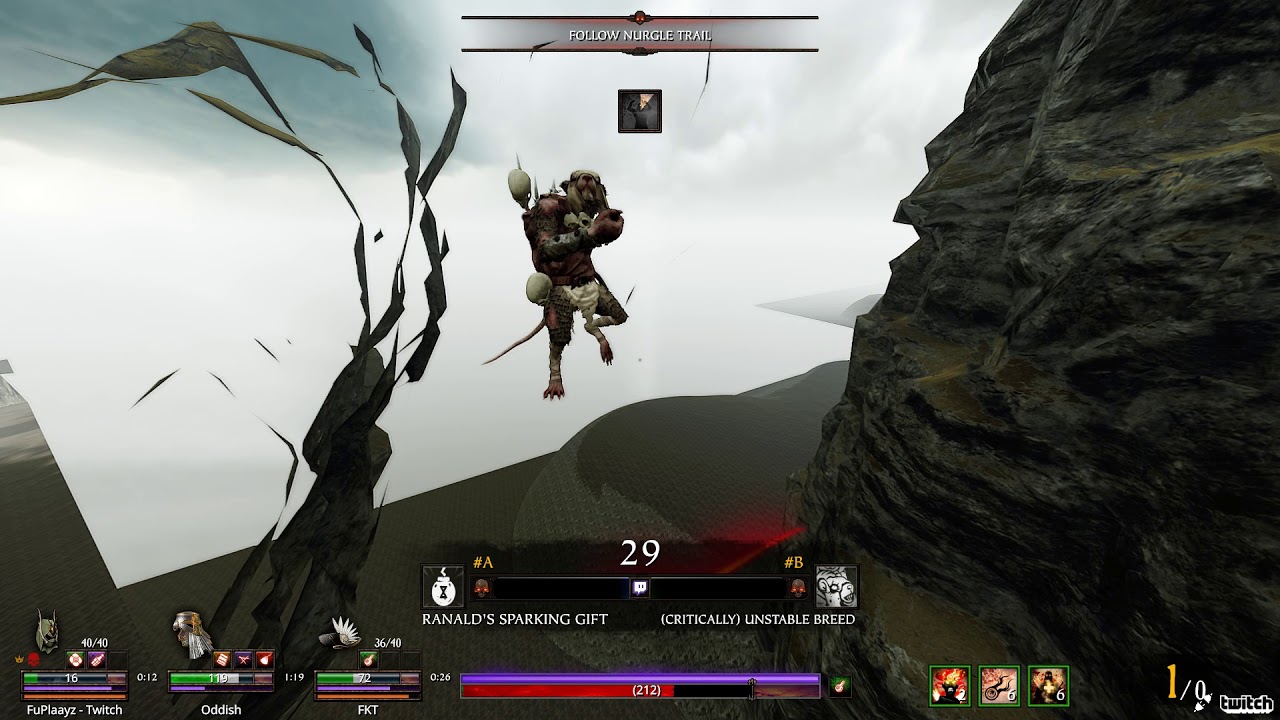 I agree with some of this that behaviours should be altered, particularly with ultimate abilities, but in the meantime if you practice your push timings you can push at the exact moment to stop them hitting you even if you’re middair.

I think changes do need to be made but this is a way around some issues.

Pushing isnt working, cause half of time they jump at you at supersonic speed

I’ve seen that happen once or twice. But that’s literally once or twice during all patches and betas since launch. If that is a frequent issue for you, not caused by a combination of mechanics and latency, then I understand that you’re frustrated. I do question whether it’s a frequent occurence for more people though.