Why does the Ironbreaker ult only knock bosses back with the taunt talent?

If you’ve never played IB, basically he gets a shout that taunts everything around him while boosting his durability and stamina. There are multiple ways you can use the ult, you can use it to attack while tanking the hits you take in return, you can turtle up and block for zero stamina, or you can kite enemies around while they are taunted and let your party finish them off. There are three possible talents at lvl 25 that modify the ult. The first increases the duration from 10 to 15 seconds, the second increases the taunt radius by 50%, the last one makes the taunt affect bosses as well as regular troops.

Is this a feature or a bug?

On the one hand being able to stun bosses is awesome, you can even combine it with a conc potion to push them off cliffs just like any other class with knockback. On the other hand, it’s kind of counterproductive if the point is to taunt the boss. By the time the boss recovers from the knockback most of your 10 second ult duration will already be up. Plus being able to stun bosses at all makes this the meta pick out of the three lvl 25 talents in terms of utility.

I don’t even know why the ability knocks back to begin with, it’s not even the purpose of it.

I didn’t know it did that. Since it doesn’t actually taunt bosses anyway, I guess that makes that talent not quite useless after all.

Why do you say that? I’ve found the knockback to be useful far more often than than taunt or the damage reduction.

I’m not saying the knockback isn’t useful, I’m saying it’s not the purpose of the ability.

The ability is meant to taunt nearby enemies. Nowhere in the ability description does it say it also knocks back, nor does it make sense for it to knock back when you want the enemies to hit you.

If you wanted to knock back enemies, that’s what you have Mercenary for, that’s his job. Tanking enemies is the Ironbreaker’s job.

I’d say that the description is just flavour. IB’s ult has lots of purposes, and I don’t know anyone who thinks they include taunting things and holding block, as the description seems to suggest.

Aye, I’m all for abilities being able to be used for a variety of purposes according to different situations, as you described, but it’s my opinion that an ability should not do something, that it itself is not stated to be capable of doing.

I.E, if the ability doesn’t say it knocks back, it shouldn’t knock back.

Now, if Fatshark changed the ability description to say it does knock back, I’m fine with it, as it’s a decision they decided to make.

But as long as it’s not strictly stated, it shouldn’t.

You can also use IB ulti to “unhook” a player from the hook rat and you don’t even need to take the “OI! WAZZOK” talent to do it.

Hook rat gets knocked down while slaves, clan rats and monks get pushed back. This doesn’t affect Storm Vermins. 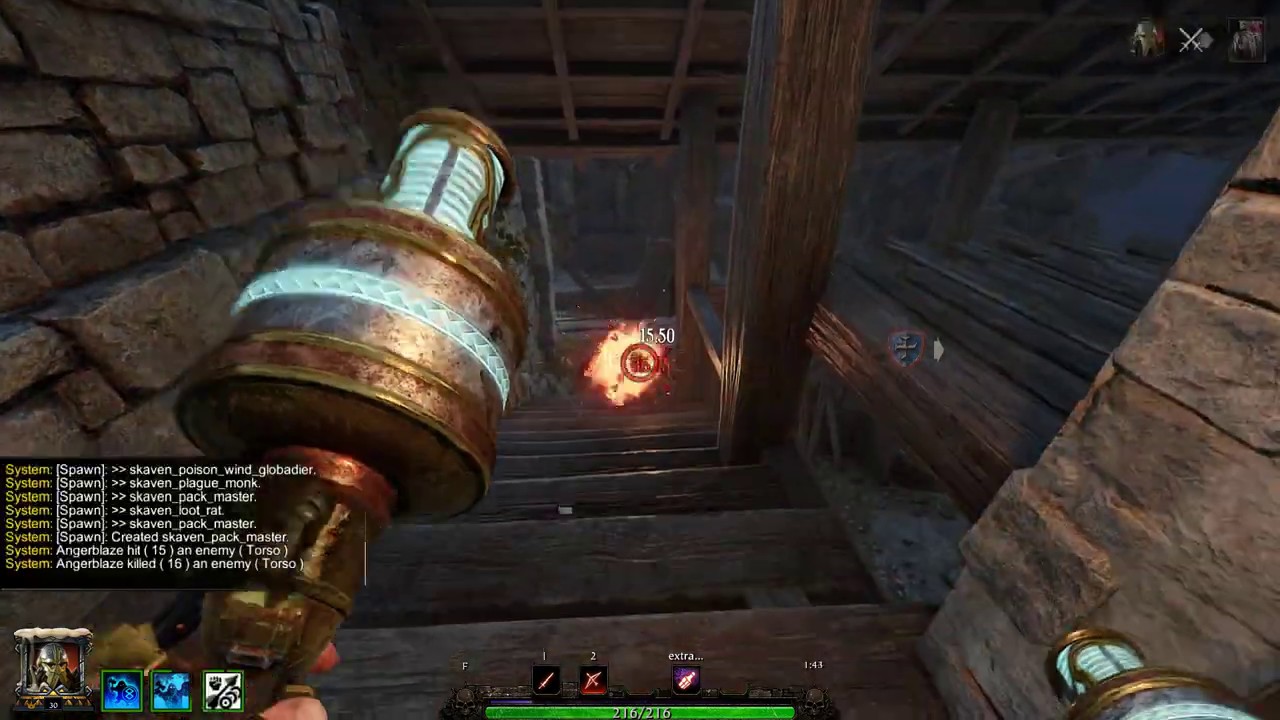 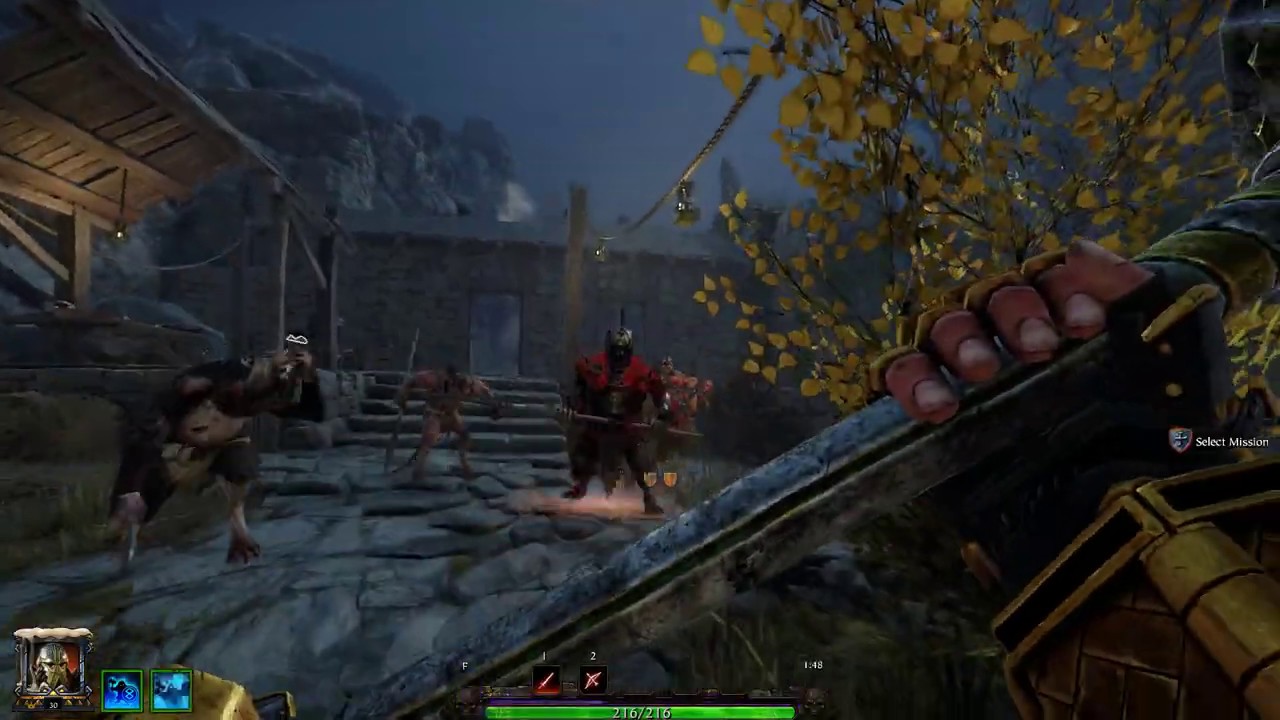 Honestly, I’m glad it doesn’t just do what the description says. If all it did was taunt and give you infinite block, it’d be a pretty terrible ult.

thats how you agro on his ult

I didn’t know that. Pretty interesting.

That’s not terrible in the slightest?

The ability to control who the enemies attack, and you yourself being able to block all attacks for the next 10 seconds isn’t bad at all.

All of the things you described above can be done without the ability having a knock back.

I don’t think I’d get much use out of it if that’s all it did.

Anyway, thanks @Tamren, I’d been using the range extension, but I think I’ll switch to the boss taunt now. Having a way to save people from getting messed up by a boss is pretty useful.

I mean i’m not sure if its working just right that but from gameplay perspective and very similar mechanics of this its my guess. Only fatshark staff or somebody who digged into gameitself can say for sure

The Ult needs the stagger to do what players expect from the ability. Without the stagger enemies would all finish their current attack chain before switching aggro, or worse would instant 180 while attacking. The stagger ensures that enemies are immediately interrupted and turn and attack the IB when you press the button to make the ability feel more responsive.

No, I definitely agree that the ability should also be able to be used offensively (in this case, interrupting enemies’ attacks), but I imagine it could do so without the knock back.

Since you are taunting an enemy, thus forcing them to attack you instead of someone else, it by definition has to stop an enemy’s current attack, if they are doing one.

However, I believe it can still do so without a knock back. The knock back probably makes it simpler, yes, but if that’s how it is, the ability description should at least reflect that it does a small knock back.

Also, an instant 180 wouldn’t be that bad considering you have infinite block for the next 10 seconds.

Also, an instant 180 wouldn’t be that bad considering you have infinite block for the next 10 seconds.

Unless it’s a CW/SV doing an overhead and you have teammates standing next you who thought they were safe because the enemy back was turned.

That would be attacking a different target, which by definition should not be able to happen, since you are forcing them to attack you.

Also, Impenetrable doesn’t taunt Chaos Warriors anyway, it only taunts “man-sized enemies”, and I seriously doubt that you’d often find yourself in situations where you are taunting a Stormvermin in order for them not to attack your teammate, only for another teammate to go up and butt hump you in order to even be feasibly close enough to be hit by a Stormvermin THROUGH your block, at the exact same time as the attack lands.

Wait a second… It does. I mean, I know what does the description say, and Chaos Warriors are not human sized… but I also know how often I taunt the CW patrol when shi*t hits the fan and hold off the storm while the rest of the team are killing them. 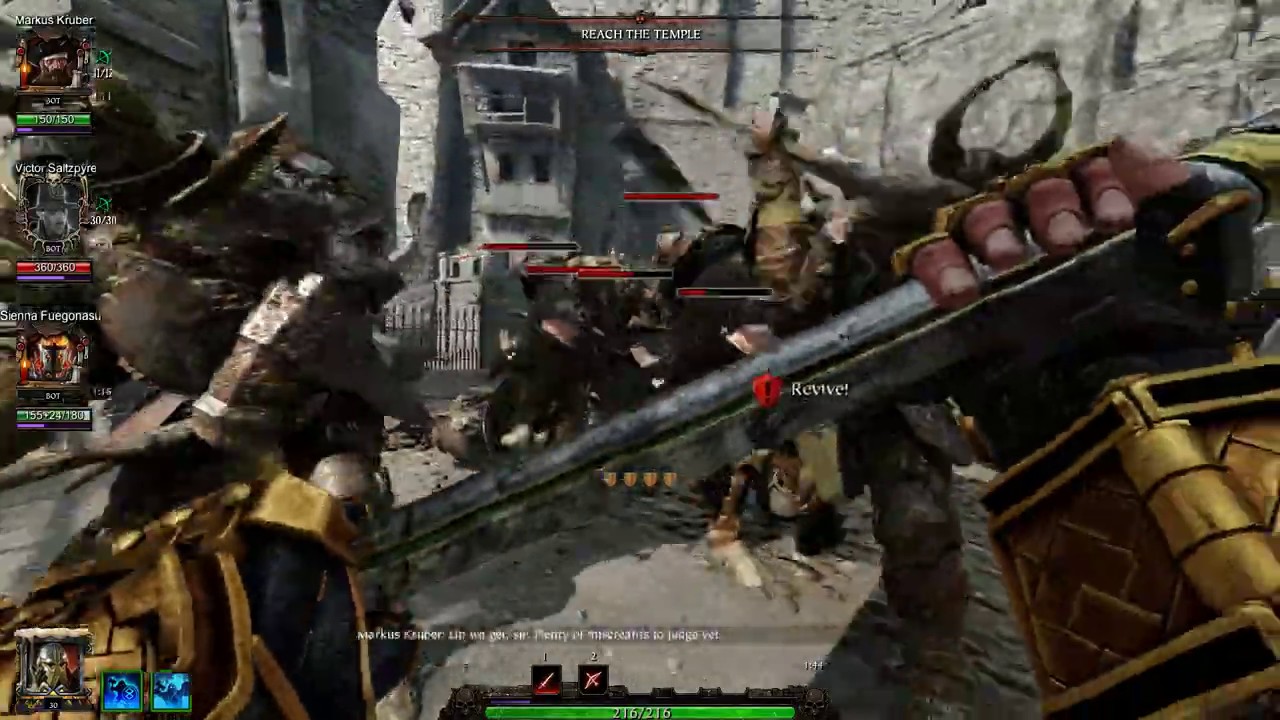 Oh well, just all the more reason to update the ability description of Impenetrable, wouldn’t you say?

Besides, just like with Stormvermin, I seriously doubt the situation described above would happen often if the “180” thing was implemented.

Oh well, just all the more reason to update the ability description of Impenetrable, wouldn’t you say?

Yup, they aren’t men sized and I agree, they should update the description just to avoid the confusion. Something like “Works on all non boss/lord” enemies