Why did they go from this

But, what we’ve seen are Plague Zombies, not Plaguebearer 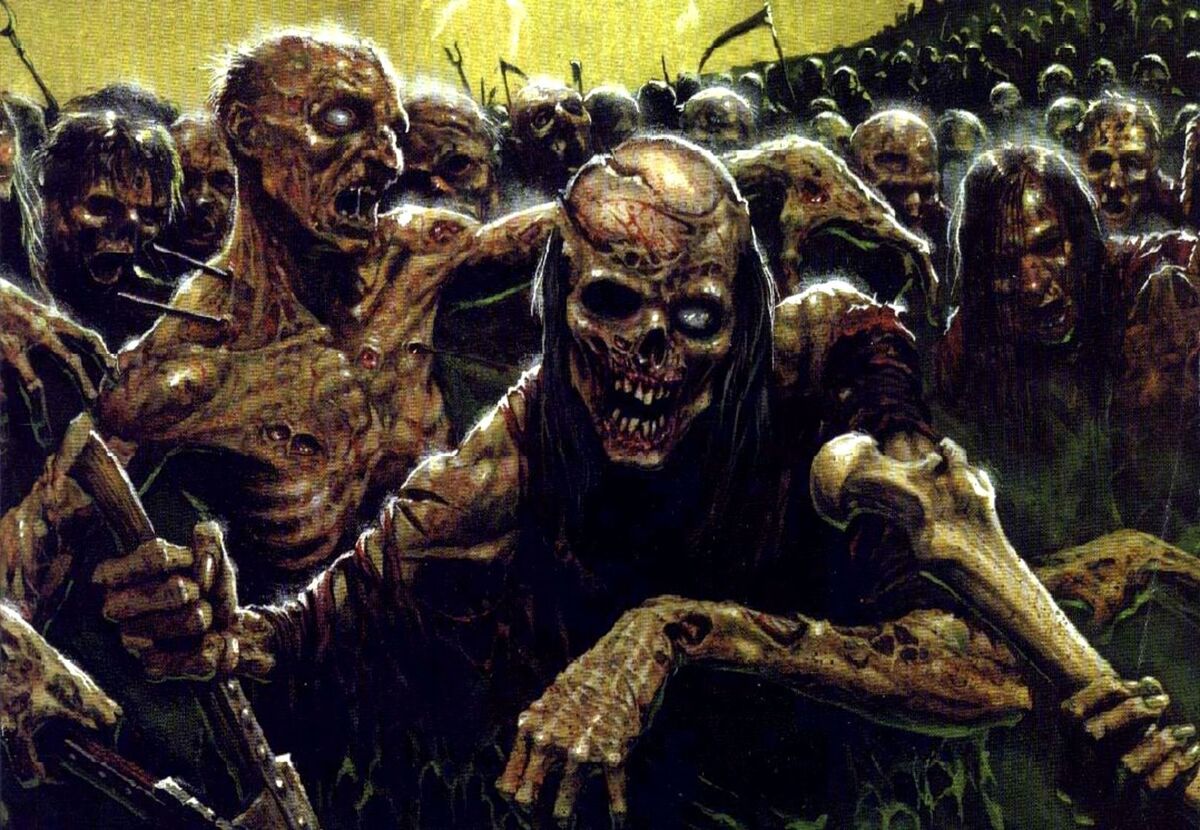 Attention Citizens: Beware the Zombie Plague. All deceased must be burned within six minutes of death to prevent re-animation. Propaganda poster seen on Cadia The Zombie Plague, also called the Curse of Unbelief, is a deadly, Warp-spawned viral...

No, you’re getting all mixed up, plague zombies and poxwalkers are two similar but different creatures. Hosts inflicted by the zombie plague become rotting, decaying shamblers while hosts infected by the walking pox end up mutating into twisted versions of themselves with horns growing from their cranium similar to Plaguebearers. The zombie plague is mainly used by Nurgle himself while the walking pox is specifically tailored for the death guards.

I strongly assume its because there is no need for such a variety in detail on the trash enemies and i believe that developers of warhammer games have to be quite cautious in regard to graphical content, especially for censoring purposes.

Trash enemies the main thing you will kill no need to have details… what ? Its actually should be most detailed unit because its 90% of things you kill.

Source? Was this confirmed by devs or is this speculation?

That doesnt make sense, because the trash units are horde based and have the lowest hp. Even though you are on average killing most of them in a run, they are also killed in like two hits most. Another factor would be the gameplay reason of enemy threats looking differently enough that the player is able to recognize them when they mix in a horde.

Also think a little bit about your comment when we already have two games with trash mobs that arent detailed at all.

Details are not only graphic, look at how L4D did it, they have most complex movement, most animations and different looks because even they are trash mobs they are your 90% main source of enemy so they should be best out of them.

I don’t think they ever stated if it was Plague Zombies or Poxwalker.

Honestly they should have both, with the Plague Zombies as trash mob (Norscan Thrall) and Poxwalker as better units (Norscan Raiders)

Look at how Vermintide 1 and 2 did it. The games literally made by Fatshark. Use them as example, then we dont need to have this stupid conversation.

Yes why compare to wildly succesfull co-op horde game that is 10 + years and still have bigger online count than both vermintide combined hmmm indeed why.

player numbers has zero meaning in terms of quality of a product,

l4d was published at a time were zombies just became the hottopic in mainstream media.
valve is operating steam the defacto only widely accepted gaming launcher at the time.
valve already had a vast record of widely succesful mega hits in the gaming industry, such as
counter strike, half life, half life 2, portal and teamfortress 2 (all released before l4d)

while fatshark is a was a relatively unkown indie studio without any hits in the grand sheme
vermintide while using the poular IP of warhammer is no way near mainstream.

How nice that you ignored that this game is over 10 years old. Its literally new generation of players. L4D had amazing game design sense, they know what should be focused and made great. Otherwise you know b4b would have more players than l4d. You can even open dev commentary for l4d ingame and there is a lot of great insight about what went where. But if you think yeah main enemy should be ignored because its trash enemy something is wrong with your perspective

i literally couldn’t care less about the discussion you had with @Arthadaw and @theppekausen of whatever detail of trash enemies.

i just pointed out your flawed argument, also btw the age of the game wasn’t part of my argument because i used their release date as reference

and while yes the player count for a game that is 10+ years old is unusual high,
i bet percentage wise the vermintide games aren’t too dissimilar to the left 4 dead games
im totally guessing here but maybe 2-3% of the sum total of purchased copies i would think are still playing actively

L4Ds playercount is also still high mainly because of mods. Almost no one is playing the original game anymore.

When you watch the Gameplay released (multiple 20mins)

They do have Horns on side of the Head for ex.
It also depends how far you are in the Story. Later on the Virus spread more and got longer hold of people, so they look more like the first Picture, mixed in with the second!

And btw, the Poxwalkers do lok very varied compared to Slave/ Clanrats in V2

PS. pretty sure FShark said they are Poxwalker!

Have a read at this, and that.

Huh? I didnt disagree with you i just wanted to know if that guy had a source since he said they were zombies but to me they look like poxwalkers so idk why you tagged me

Completely agree. There’s a video somewhere comparing L4D2 and Back for Blood, showing how L4D2 spent literally hundreds of thousands of dollars just making a stuntman do live action deaths. Something silly like 10 deaths for a hit on each location, left bicep, right bicep, left, knee, right knee, stomach, chest, head, left thigh, right thigh, headshot, and so on. There was literally wheelbarrows of cash injected into the trash enemies so it felt ‘real’. And it really works - even now mowing down a horde results in enemies staggering, holding their stomach, stumbling, tripping, collapsing and generally dying in realist ways. It’s one of the main reason it’s STILL massively popular and immersive. Sure it don’t need 4k textures, but the animations make or break the immersion.

[edit] I think there might even be some kind of directors walkthrough chat in L4D2 that tells you why they made the decisions they did.

IMHO, it is popular because it was such a great design in all the aspects, from humour to the mechanics. B4B has been the greatest disappointment ever for me, certainly as far as I can remember in the last 10 years - as if someone took L4D, removed all the things that made it fun and added a lot of stuff I couldn’t care less about.