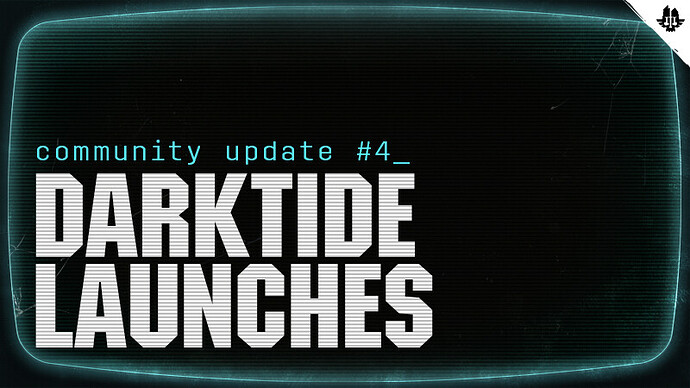 Today, we officially launch Warhammer 40,000: Darktide! This is a moment that many of us have been looking forward to for quite a while, and we couldn’t be more excited to share our “labor of love” with you. We believe we have created something special that we will build on for years to come, and we look forward to your continued support and feedback along the way.

Many of you joined us along this journey to get here, whether in playing the technical test, the closed beta, or the pre-order beta. All of it helped, and for that - we are immensely grateful, especially knowing that it often meant you sometimes played a broken or partial game.

Since our last update, below are a few highlights of areas of improvement and what to expect - followed by much more detailed KNOWN ISSUES and PATCH NOTES.

The pre-order beta helped us fix many of the issues. It was a big part of the reason we ran the beta. In particular, we have made a lot of progress in fixing “GPU Hang” issues, which was the #1 contributor to client-related crashes. This isn’t to say we have a 0% failure rate, and the team will continue to work through this as we know that some users will still have issues - but we believe it is much improved.

There has been a lot of improvement over the last two weeks, mainly due to the number of players playing, providing feedback, and allowing us to fix and scale our service. In particular, party matchmaking should be improved, with tighter matching levels and better class distribution. We have also resolved some issues for players disconnecting late in missions and getting error code 2007, and we are still actively hunting down more causes of this issue. Look for us to continue to improve this area as we bring more and more players online.

We’ve adjusted the final balance mix for launch. We wanted to give players a clearer sense of how to interact in combat: When to act and how much time they have to act/react is an essential part of these balancing adjustments and will continue to be, based on community feedback.

We want to allow players to dodge and kite but also be required to pause and reset dodge counts. We feel that chain-dodging as a default solution feels repetitive, and we think getting some attacks, pushes, blocks, creative maneuvering, or abilities into the mix helps create a more engaging combat loop.

When hit while having toughness depleted, players will get stunned. There has always been a stun immunity window that allows action before being able to get stunned again, but other hit effects have hidden it. We have cleaned up and paused many of the secondary hit effects to more clearly interface when you can act and not sabotage player actions in these precious frames of defiance. We have also increased the action windows a bit to allow for a broader range of action, as some weapons are relatively slow.

After a few tweaks during the beta, the toughness loop is now more granular and less jumping from max to min all the time, which makes a good foundation for an interesting defensive loop and build choices.

The intent is to create a loop where players use talents, abilities, coherency, and traits to regain the safety of full toughness while gaining reduced damage along the way. All that said, we will continue to balance the experience over time and are just getting started.

Please, keep reporting issues, and express your thoughts in our Discord channel and Fatshark Forum. On our social channels, we also provide regular updates.

As for the latest - Ogryn sized - patch notes, let’s get into it:

The 1.0.11 update (Steam only) and the 1.0.10 Update (WindowsPC & Steam) focus on improving the game’s stability and introducing new features. Below is a complete outline of the changes in these updates. We understand this may be confusing, and we aim to have parity in numbering for future updates. (For clarity, the Steam update today contains both Patch 1.0.10 and 1.0.11, whilst WindowsPC only contains Patch 1.0.10)

In terms of feature content and updates to weapon balancing, both updates are identical. The same applies to known issues.

The enemy has entered Throneside. This is unexpected - the Warband didn’t know they’d got that far. They must be driven out before they can gain a proper foothold. 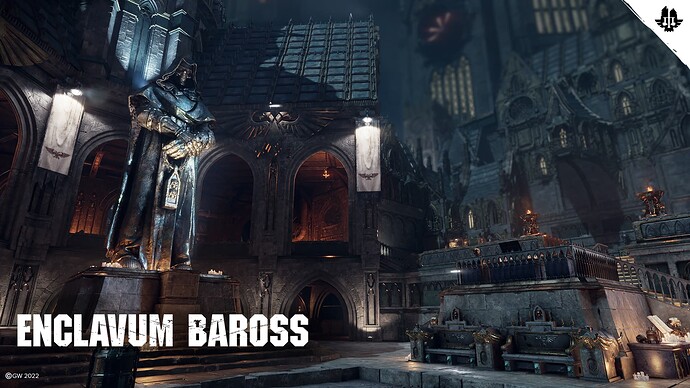 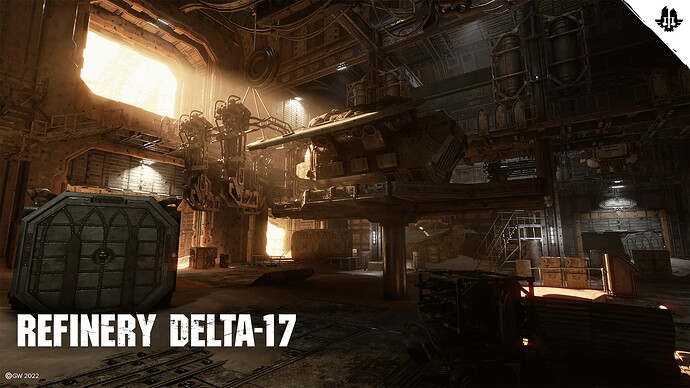 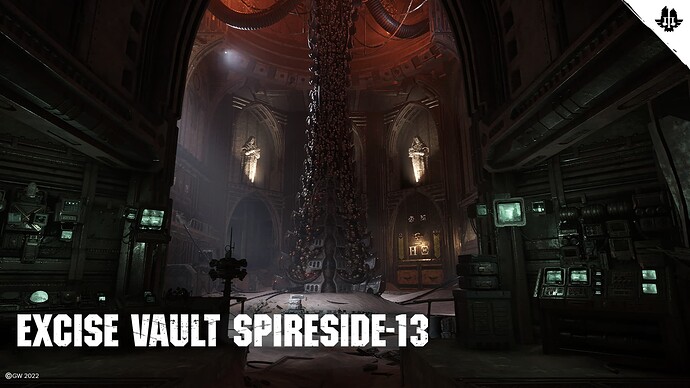 Launch is just the beginning for us. While we are excited about the launch of Darktide today, we are rarely satisfied. Look for us to keep optimizing and improving the game, and we are keen to hear your feedback.

I went to the Armoury and purchased a skin, but it isn’t showing up. Why?
This is a known issue. The skin is purchased and will be equipped once exiting the menus and in the hub.

I recently bought an NVIDIA GPU, where is my promotional Darktide key?
NVIDIA is currently hosting a promotion where new purchases of qualifying RTX cards will also receive a key for the Darktide Imperial Edition.

If you have not received your key for the Darktide Imperial Edition, please contact NVIDIA directly.
The easiest way to do this is by using the 'Ask us a question or ‘Live chat’ buttons at the bottom of NVIDIA’s Support page here: 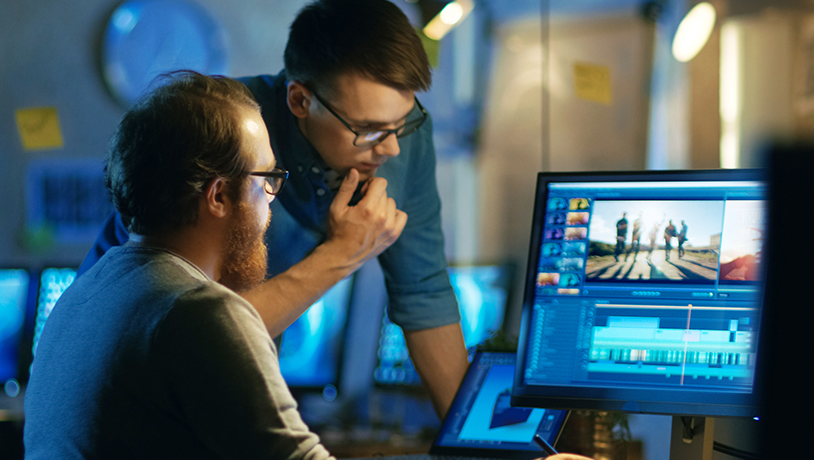 More information on this promotion can be seen on NVIDIA’s website:
Get Warhammer 40,000: Darktide - Imperial Edition

When will more detailed weapon stats be available in Microsoft Store?
We understand the way information is presented for weapons stats is unclear. We hear you and are working on changes we will be implementing post-release in the next update.

When is Darktide coming to consoles?
We know this is one of the top questions console players have.

We will have more news on the Xbox Series X|S release date as soon as possible and likely immediately after the release on PC.

At this time, Darktide has only been announced for PC and the Xbox Series X|S.

Will progression persist between the pre-order beta and the full game?
Yes, progression will carry over into the full release

For the love of Emperor, LET US IN!!

1 hour left, my body is ready.

After a few tweaks during the beta, the toughness loop is now more granular and less jumping from max to min all the time, which makes a good foundation for an interesting defensive loop and build choices.

This means chip damage stayed in then doesn’t it?

Set all dodge count reset timers to 0.85s for all weapons and classes. (down from 1.0s on many, but not all, weapons)

This is a step in the right direction, but please go farther than this. Lower the lockout to what it was in VT2 and let us regenerate stamina while dodging at an absolute minimum. There are other problems, but those two are the biggest.

Failing a mission should no longer grant you the crafting materials you found in that run. Soz.

Congrats on the official launch into paid early access!

So, still chip-damage? Right about the biggest mistake, Fatshark. Please… sit around the table with eachother one more time to RECONSIDER!

Failing a mission should no longer grant you the crafting materials you found in that run. Soz.

Wow and me and all my friends were commending you for that becasue it’s less toxic as at least you get mats.

Guess you make right design choices by accident then. Dissapointed.

Close to no changes to Psyker

I really hoped that there will be more to it, not just early access stuff

Can’t sell you materials for premium currency if they are easy to get!

Chaos Hounds should no longer receive running stagger from pushes

Can someone translate this from Fatshark language to english?

So you cant push dogs that run towards you/someone anymore?

Thanks guys! When is toggle to aim coming please?