What is a Sharpshooters job? His job is to eliminate any special, elite and shooter that he can before they put his teammates in danger. Correct? Then why can’t he have the Scab Stalkers shooting his teammates highlighted? The Scab Stalkers ares one of the four basic shooters that use a gun to deal ranged damage. Because they have lower range than the rest of the shooters they also have more health and pack more punch. I can totally get behind that. I’m all up for enemy diversity, BUT why do they counter the class ability of one of the characters?

It would be understandable if these guys would have an arm’s reach of range, minimum health and also deal low damage. Was it a good design to make them immune to the Volley Fire ability? Let’s watch my shadowplay of a damnation match to answer this question. Here I exit my cover to help my friend get back on his feet (notice the Scab Stalkers running past me while not being highlighted). I committed because I fully believed my 200 toughness and +stamina curios would provide me with enough protection to be able to shrug off any attacks that a single basic enemy can throw at me. Enjoy the video. 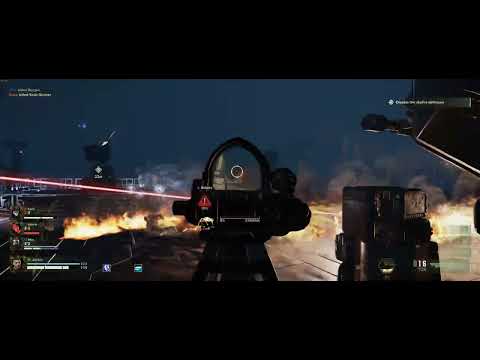 So, is this good design? A single basic enemy taking 200 toughness clean off of me with 2 burst of fire in a single second while being completely immune to being highlighted by a Sharpshooter Volley Fire ability? I think the community has been very clear in answering this question.

Do I need to say more? This “feature” or decision might have been the most reported gameplay-related bug for the Veteran Sharpshooter class which is the most played class as we speak. Nothing tells you that this ability shouldn’t highlight the Scab Stalkers, it’s actually quite the opposite. The feedback is there and I really trust you guys over at Fatshark make the right decision on this one by tagging the Scab Stalker as a “shooter”. 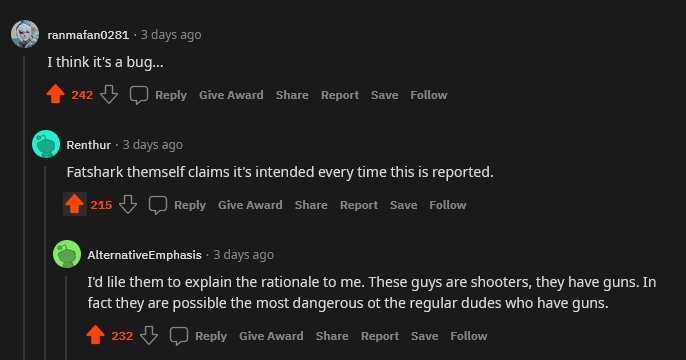 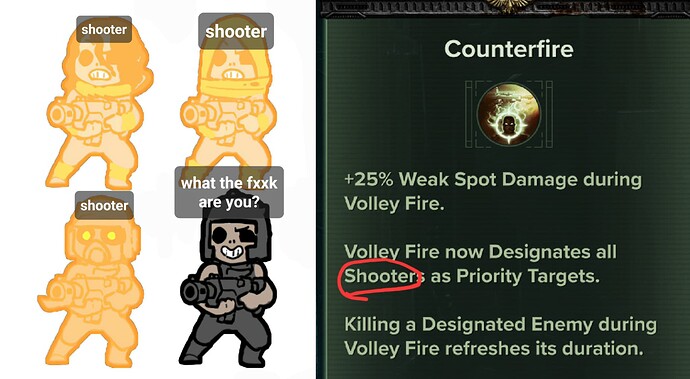 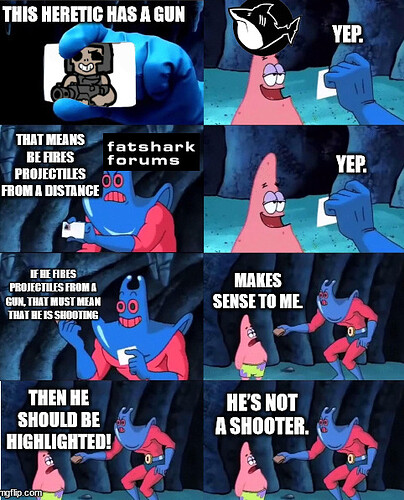 It isn’t to late to correct this poor decision. Let’s just all call it a bug, fix it and go home. The Scab Stalkers can empty the toughness of any character quicker than a Tox Flamer while also coming in dozens at a time and being immune to Sharpshooters Volley Fire for absolutely no reason making the players think it is a bug, because it feels like a bug. I’m not sure how have we ended up here, because this doesn’t even sound passable on paper and definitely not in practice. I hope this is fixed sooner than later for the reason that it is not only a confusing annoyance, but also a big issue on heresy and damnation difficulties.

Just encountered this as a Vet in a T5. Was thinking it absolutely has to be a graphical glitch, and I could’ve sworn it works in the Meatgrinder. But uh…yeah…please reconsider this Fatshark. It makes no sense, and if this is actually intended for some absurd reason, then please add it to the Feat description (and think about changing it too please lol)

I was asked by a CM in the bugs section to post in gameplay feedback, and here it is:

Counterfire is a Veteran Sharpshooter level 30 perk: [image] Currently, despite saying it designates all shooters, it seems to very glaringly omits highlighting one of the basic shooter enemies: [image] Despite being reported as a bug a few times, the threads have been repeatedly been marked as “not-a-bug”. Despite being a designated short-range fighter, they act pretty much the same way as the other shooters, where when they detect you they scatter into cover and try to pot-shot you. Th…

It also has the dev rationale which the CM got for me in the bug thread.

So I asked the devs for clarification on why this enemy was excluded, the reasoning is that the feat is intended to highlight the longer ranged enemies, such as the scab riflemen. The scab currently excluded is instead more of a short-range fighter.

The gameplay confusion is so bad if this is intended, because you’ve got near identical enemies not being highlighted while they’re all shooting at you from 3m to 20m away anyhow. In between highlighted shooters are non-highlighted shooters, which makes you have to double-take since you were thinking they are melee-oriented enemies.

Also, since flashlights and visibility is near zero in some areas as well as Lights Out map modifiers, not highlighting short-mid range shooters is also detrimental.

I know you’re just relaying the info here lol, it’s just boggling to me as someone using the career in Lights Out and Difficult 5 maps. It doesn’t feel good nor right

Remember, if you have nothing else to say, like and reply with a +1. It reads as engagement.

Assuming you agree of course.

I agree, Scab Stalkers really aught to be highlighted.

Someone mentioned something in the other thread that might actually explain this.

Allegedly this is due to Scab Lascarbiners being a considered a more “Close-range” threat than the others. Dregs (Currently?) don’t have an equivalent enemy type, which is why this only affects Scab encounters. (Though the layout of the enemies in the Psykhanium suggests that they ARE the equivalent of Lascarbiners, and we havent yet seen the “long range” dreg variant. Long rifle users, perhaps?)

It’s possible that the dreg stalker is only temporarily meant to be highlighted until whatever long range equivalent of the dregs gets added?
Or, similarly, there was going to be one, and the enemy was cut, and they had no choice but to put that on the dreg stalker to avoid making a useless feat.

When intentional design feels like a bug something is clearly wrong in the design.
Either the volley fire needs to be changed and the text be more specifc. Though listing all kinds of shooters might be confusing in of itself, i have plenty of hours and I have no idea what things are called still, I don’t find that info anywhere.

I want a bestiary in general so I can see each enemy and what they classify as in game.

Though these are just band-aid fixes. They should be highlighted imo, sounds simplest for both us and for Fatshark. Any other solution seems like it need way more work, like reworking the Volley Fire ability or giving more info etc etc.

I don’t think it will throw balance out the window either.

The Spongebob Meme has earned a medal in my book. Peak Umgak - pardon wrong game.

This is the most frustrating sh*t too. I think a lot of the ranged enemies really need looked at in terms of damage, playing a melee class like Zealot or Ogryn often feels like shite because you’re forced to cower behind a wall or get shot to pieces by like 8 of these feckers at a time.

I still don’t get why the “fragile” ranged class has the most effective HP compared to the two “tanky” frontliners.

The feedback is there and I really trust you guys over at Fatshark make the right decision on this one by tagging the Scab Stalker as a “shooter”.

After ALL that happened you are still hoping they will do “the right thing”? Brow, I want this game to succeed just as much as the next guy, but from what I’ve seen FS is hell bent in doing the worst possible design choices AND stubbornly sticking to it no matter what people say.

At this point my only “hope” is that they will take so much hammer in the head from their player base, that they will eventually consider player’s feedback and do something about it. They will never admit it they went the wrong way, oh no! But still, if they would just listen for a minute and work with the community (this post is a great example of a valuable feedback), this could turn around pretty quickly.

As it stands, VM2 will have more players online than DT in a month’s time, I believe. It’s just sad.

The community: This doesn’t make any sense, please change it.
Fatshark: 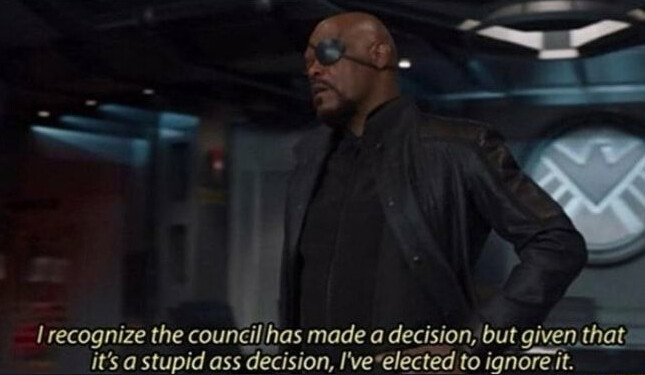