Vermintide 2: Winds of Magic coming to you in August

Holy s*** that was great

Aw, I almost feel bad for the little guy.

@Fatshark_Hedge, Is it will be possible to play default maps on usual difficulties with winds of magic effects?

As I understand (and subject to change or alteration), the Beastmen can be found in the Helmgart levels (where it fits) should a player in the group (perhaps the host, this hasn’t been fully defined yet) own the expansion. They might not show up on thematic levels - such as Skittergate, Into The Nest and such.

How long before invitations are sent out? Why isn’t this just another ‘use beta code and download’ sort of deal?

Thats why i asked @Fatshark_Hedge: Will the beta be an extra branch besides the normal game, so i need to have some extra space?

Why isn’t this just another ‘use beta code and download’ sort of deal?

Because it’s a closed beta?

Previous statements, as well as the linked page, suggest that they will pick players with varying experience from the game. If you frequent Legend you most likely don’t play a lot of Veteran and vice versa. When I signed up it didn’t prompt me fill out any extra forms though, so who knows

There was a survey a couple months ago, where you could give some details about your play habits and sign up to eventual beta testing.
I presume they will check those who signed up then and now and probably pick from there.

The beta is an entirely seperate app and will require additional space.

The Blue and White livery on the soldiers in the trailer is Aldorf colours, but the Lord and one of his knights at 0:13 seconds have green and Cream livery. This might be a clue as to the town the expansion is located in… unless It’s already been revealed and I’ve missed it. Any Empire Nerds know which town has a green and cream livery? It makes sense that a smaller town might ask Altdorf for some help to squash a Beastman horde.

Surely it’s not Mordheim because that got Stomped a while ago.

Also I think the units displayed in the last 8 seconds look more like Ungors to me. They have small horns and crappy equipment.

id be shocked if we get it this year.

The Steam page says that the Beastmen are rushing out from Reikwald Forest.

Judging by the trailer, the meteor seemed to land relatively close to where the Beastmen were having their duel, meaning the meteor has to have landed close to the Reikwald Forest.

According to this map…: 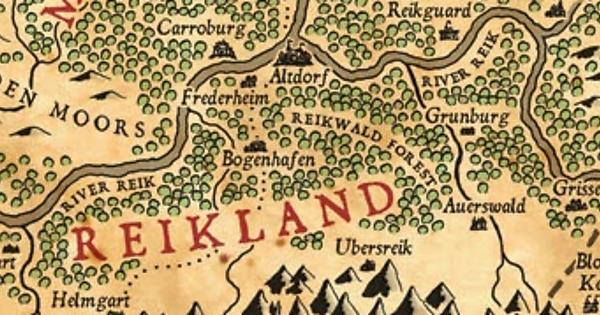 Altdorf can also be crossed out. Not only is the city we see in the trailer nowhere near its size, but a meteor never fell on Altdorf in the lore either. Plus, an expansion involving the capital of the Empire itself in the otherwise relatively smaller-scale events of Vermintide wouldn’t make sense.

So that leaves Frederheim, Grunburg, and Auerswald. My knowledge of these towns will be based on information found on the wikia.

Frederheim, according to the wikia anyway, is not as much a fully-fledged town as it is just a mental asylum where the Cult of Shallya attempt to treat Reikland’s mentally ill. The town has a population of only 75, and the few villagers that live there do so off of agriculture.

So the last two are Grunburg and Auerswald, and it could honestly be any of them.

Both of them are port-towns (which explains the bodies of water surrounding it) of larger size and population, and thus of larger importance, which would warrant a large sum of troops being deployed there, but beyond that, the towns don’t really have anything distinguishing about them, and are largely just the same. The livery of both of them is unknown, as far as I can tell, so we can’t go by colors alone.

So, in conclusion, if we’re going by towns that have already been established in the lore, it’s either Grunburg or Auerswald. That, or Fatshark will make up their own town for the expansion, which is, of course, also a possibility.

Funnily enough, Reikwald Forest was a map in the first game, as part of the Death on the Reik DLC. Maybe aspects of it will be seen in the adventure map we’re getting with the expansion, which will most likely be the heroes travelling through the forest and investigating the destroyed town.

could Bogenhafen be the town in the trailer? I thought I remember some one saying the story for that dlc was not done yet.

image1894×1623 2.22 MB
As you can see Reikwald Forest seems to be bigger in this Official Vermintide map. Also I’m quite sure that Reikwald Forest actually can mean all the Forest making it quite pointless (note no other Forests are named).

image328×574 45 KB
Wasn’t able to find anything attached to it and many towns lack CoA/Banner anyway. So it’s most likely a new creation.

I thought it might have been Weissbruck, a bit closer to Altdorf to ask for help, but deeper into the Forest.

With the red/blue shields you have posted, there’s 3 possible liveries then. Altdorf, The Green/Cream of the Commander and this blue/red. Could it be Auerswald,Stromdorff and Aldorf?

Since the Twitch Stream showing the Death Wind on Engines of War I’m completely Hyped for this release even if the throwing axe seems completely daft. ALSO As I work in a School I’m GUARANTEED to have the time off when it launches. Surely my kids can fend for themselves for a while… cook their own dinners and stuff. It’s not hard really. Bout time they learned.

Reikwald Forest actually can mean all the Forest

While it does have a bridge and walls, the walls a higher and the river is real. But also does not match with the banner (to the left).

I mean, there’s always a possibility, but I personally doubt it.

It doesn’t really look like the same town from a distance, and I don’t recall anyone saying that we were going back to it.

Besides, when we went there, the Pactsworn had already taken over the city.

However, geographically, it is one of the most likely candidates.

I forgot about the Vermintide 2 map. I mean, I’ll admit that the only thing I did was search up “Reikwald Forest” and the first thing that came up was the map that I found, but as far as I’m concerned, the one you’ve shown here should also be valid.

So, taking all of this in consideration, it’s most likely a town in eastern Reikland, though a bit larger than just the immediate area shown in the map I presented.

In that case, the amount of towns we can include are extended quite a bit, however, for them to receive reinforcements from Altdorf and Middenland (at least judging by the livery shown in the trailer), you’d assume it has to be a town that’s close to both of these.

Which makes the most likely town… Weissbruck (as mentioned by Argonaut).

The colors you’ve shown, namely red and blue, are the colors of Altdorf. The town received reinforcements from the capital as well as Middenland in an effort to exterminate the local Beastmen. It’s the green and cream livery mentioned by Argonaut that’s, supposedly, the colors of the town that was destroyed.

Then again, it’s unknown if the town shown at the beginning of the trailer is the same as the one shown at the end. We see the soldier and his wife do a fair bit of travelling in the trailer, which might mean the two towns are separate.

In that case, it only complicates things further, but what can you do?

It could be Weissbruck, but according to the wikia, Weissbruck is only a small trading town with a population of just above 270 people.

We’re in the End Times, and I doubt trade is the matter of utmost importance (especially a smaller town like Weissbruck, compared to a larger one like Bögenhafen), to warrant an entire Altdorf regiment to be sent there.

But, geographically, it’s indeed the one that makes the most sense.

No, Haxorzist is right in that the banner is of Stromdorf.

As seen on the Steam page for the DLC, the titular beer stein with a lightning on it is shown.

Karak Azgaraz, as far as I know, uses blue colors.