Pretty simple question. I’m asking more for what weapons you think are cool/fun rather than what’s the best to use.

For me it’s a hard choice, but I would have to go with the elven 2h sword, specifically with the “predator’s driach” illusion. I just love 2h curved swords in general - they just look so classy yet brutal (much like myself). This is currently the only weapon/illusion in-game with that general style. While it’s not my favorite in terms of its moveset, I still end up using it a lot just for that reason.

Used to be my go-to weapon until I discovered that the Executioner’s Sword basically does the same thing, but better.

Kruber’s 2h hammer. It’s so much fun simply battering things all over the place, watching something’s head get clonked clean off it’s shoulders and the overhead that crumples things into the floor. Just Joyful.

It’s the only reason I go and play FK at the moment because hey, FK is for masochists as he stands now.

Going to have to also vote for the 2H hammers. I exclusively use it on my IB as the crunching sound it makes, as you bring down the overhead smash onto an unsuspecting chaos worshipper’s melon, is just far too satisfying. A lot of people tend to overlook the 2h hammers due to their low dodge distance but who needs dodge distance when you can bop things from afar with your superior reach?

Kruber 2h hammer here too. I really love Fauschlag. Should be great to have a glow version.
Soldier halberd is cool too.

Hoo boy. I can’t really give you just one or two answers. There are many nice weapons, all for different reasons.

The elven Spear is one. For one reason, it’s one of the few weapons where I’ve found the Veteran illusion to be quite stylish and nice-looking, rather than tacky or nearly unnoticeable. It’s also quite different to use from most other weapons, and historically, spear is the most ubiquitous weapon ever.

While I don’t like to use the Halberd, I like the idea of it (and long weapons in general are nice to have). It’s also one that has quite a fame in reality, even if the in-game usage (or appearance, for that matter) isn’t necessarily too close to that. It’s a Swiss Army weapon - literally.

Axe and Shield feels a bit cumbersome to use in-game (as do shields in general), but it’d likely be my weapon of choice in real life. Games rarely do axes justice as weapons.

There’s also something I like about the asymmetrical dual weapons, especially Victor’s and Markus’s. Those things aren’t easy to use effectively (once again, in reality), but in the context of the game, they work. I just wish the higher-level illusions for Markus’ Mace part of that were less ugly…

And finally, as you rarely see black-powder weapons in fantasy (even if they’re not that rare in Warhammer), I’d say the Handgun. There’s something quite differently stylish about that.

Yeah, there are also other weapons that feel or look nice, despite or in addition to their effectiveness. For a few, I seem to be in the minority for liking. But in all honesty, if I did all the weapons I like for different reasons (and none of it is simply for effectiveness), I’d be listing (nearly) every weapon in the game. As you might’ve noticed, I do have an affinity for real-life comparison, though.

I like dwarves with big axes, so 2h axe it is. A close second would be human 2h sword. Third place is shared by sword and dagger and the rapier.

Oh boy, there are two that really take the cake for me.

The Rapier, as wielded by our dearest Saltzy, is one of the most modern incarnations of the made-for-combat sword and is such a beautiful weapon. Provides most of the heft needed to leave permanent wounds, has a fantastic striking surface for real-life combat, and provides wicked reach compared to most of the non-pointy weapons. Delicious!

The second has got to be a tie between the Spear and the Halberd. All throughout history spears have been one of the most efficient weapons ever crafted because they provide 90% of what a weapon need to have and they do it all for an extremely low cost. The fact that there aren’t more polearms available to the Uber-Doober 5 astounds me; everyone should have one! There’s a reason the Swiss Halberdiers are famous from the world over.

Plus, the Veteran Cosmetics for them look great.

2h Mace and 2h sword. Why? Because it feels so satisfying and savagely good when you swing with both of those and crunch and slash the horde. The sound, the blood, the animation… so good. Especially when you hit a cluster of clanrats with the 2h hammer… Wiggly hands and legs flying around like rag dolls… so… fuc*king… satisfying

As a least favorite weapon I choose Halberd because it feels so boring and not interesting at all. I know that halberdiers are bread and butter of Empire’s army, but I just can’t…

Really, there are just so many weapons that look awesome in this game. I would have to say Spear, for the reasons others have mentioned, but also they just look cool and sleek.

Honestly, there are few weapons in this game that don’t give you the feel of them being what they are. Using massive hammers to crush enemies, or big two-handed swords to cleave hordes, or small daggers to open up bleeding wounds on the enemy . . . I especially love the big blocky versions of the Handgun, they look awesome.

Probably the only ones I don’t like are Keri’s one-handed Swords - at least the “high tier” illusions. I love the illusion with the leaf-shaped blade, I wish we had a matching dagger for it. 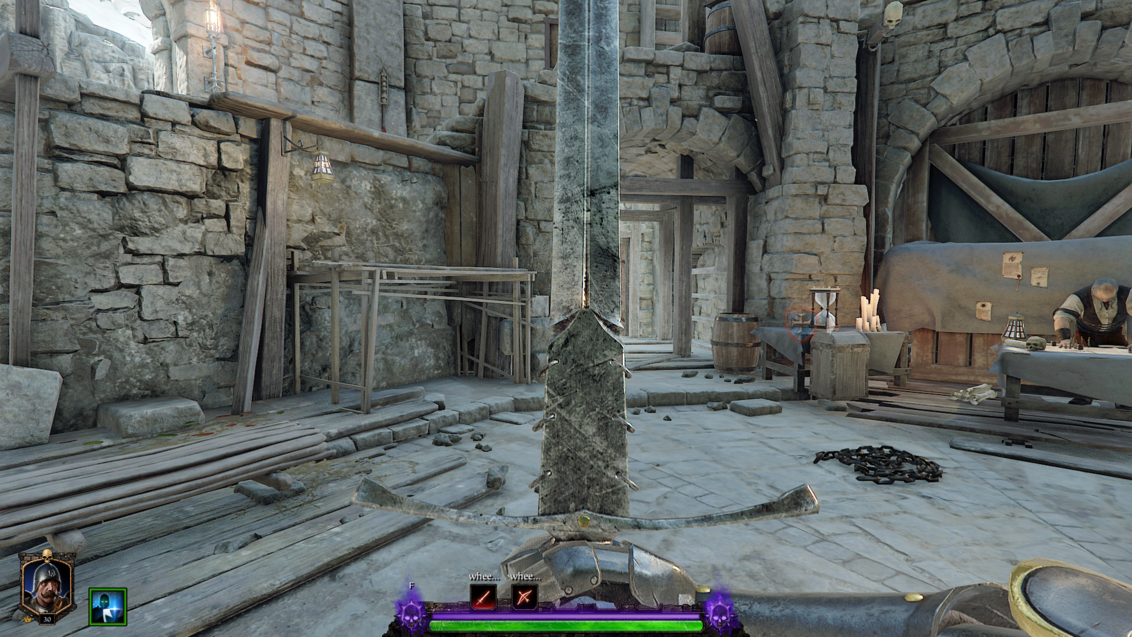 I love how it looks, used it even before balance beta. Not it very usable yet.

Interesting thing, I like many models, and most of them is low tier.

So far it’s been my flail. Love swinging that thing in a crowd of Skaven. But after I level up Victor I’m switching to Bardin and I love the hammers too.

I’d choose Bardin’s two handed Axe. I know it is currently not in the best spot. But I just play it for the fun. It reminds me of Gimli a bit.

Understandable. You like weapons which are realistic, not flashing in a blue or purple light. I also sometimes like to play those skins, but all Reds are automatically flashy, except you are upgrading them, but then it’s a bit expensive.

but all Reds are automatically flashy

You know that nothing stops you from applying low level illusions on red weapons, do you?

Blade looks absolutely amazing to me and if i recall right then only Bardin has a few weapons that are close in terms of high coverage with detailed and stylish patterns.

Meanwhile Kerillian on many if not most of hers has like 2 short glowing lines and that´s it…a tad bit disappointing in comparison.

I like shields. For style reasons mainly Bardin’s round ones, but any will do. They’re just nifty, and everything about fighting with them feels good. You want to hit me? Screw you, here’s my shield. Now eat axe. And slamming it in ratties’ / barbarians’ / beasty boys’ faces never gets old.

Aside from that, I kinda like the Falchion as well. Looks like a nice, practical weapon. Same goes for most one handed sword types and maces. And spears. Simple, nothing flashy, but effective!

Spear and Shield of course, I doubt that I’ll ever go back to the other inferior weapons when I finally got the one I was waiting for since V1!

I thought that about halberd, and then, the nerf come