With the new talents that give pretty much no survivability whatsoever the Slayer is just a vastly inferior to the other classes.

He used to be a wall of flesh and steel, shredding hordes and elites to give the team breathing room but he had clear weaknesses. No ranged attacks and without someone to watch his back against specials he wouldn’t last long against a horde. Now he’s got a ranged weapon but with the new talents you might as well stay in the back and huck those axes non stop because 3 little jabs from god damn slaverats have you eating dirt. He needs the old Oblivious to Pain, Stoutfellow and Moving Target back.

Those talents that try to limit the playstyle just need to be removed.
They are the obvious choice among those 3 and they are complete bogus.

Ranger and Ironbreaker outclass him in every way.
Want horde clear? Get some Hammer/Shield action.
Want to pop specials? Got a whole arsenal for that.
Want to help the team? Got passives/active and talents.

The Slayer class used to invoke the feeling i got from reading the Gotrek and Felix books, jumping in balls first followed by some good old chopping action.

TL;DGAS
Slayer sucks ass now and i’m salty about it

Are you also experience the current bug where Slayer’s Ult does not proc even though the purple bar is full?

happened to me several games in a row.

As far as staying alive in a fight, I always adhere to “Don’t get hit” vs “taking less dmg from getting hit” and I still managed to tank a horde for the group decently enough. Chip damage will get through in between dodges but the new one handed and attack speed talents coupled with dual hammers meant I could build a buffer of temp hp to keep going.

You are right tho, I definitely feel less useful than Bardin’s other two classes than I was before.

You don’t need to be nearly unkillable in order to be viable. You only need that if you’re planning on facetanking a lot of hits. Two completely different things.

Slayer might require more finesse now and his new jump might be awkward but he is still very much a powerhouse.

@Voidq
He adds nothing that the other two can’t do better.

wait what? what was fixed but not broken? Is the current Ult failing to proc intentional?

i mean the old one.
didn’t have any issues with that.

Slayer still has a lot of offensive power even if he has jack all for defensive attributes built into his kit. Current oblivious is… less good. The refresh time on his 50% is slow on single hits which really cramps your style given that you can take chip between swings and have full unmitigated damage straight to your life small pool of health. And unless I’m mistaken he still has 100 hp yeah? He’s a completely glass cannon now. All risk moderate reward.

I take Barge. I like Barge. But let’s say you take Barge and thus are just a career with only 100 health. Of what use then is Drengi Grit?
We banking on not being interrupted by an attack when all it takes is one strong one (in gor’s case, a fast one) or a hyperstacked double poke to down us with grims? A bit silly don’t you think?

New jump is rather obtuse as well. On top of being generally worse for clearing, worse for getting to allies, worse on hills and stairs, and worse for getting to specials it has the unique attribute that if it hangs on absolutely anything in it’s arc you can float upwards impotently and get stuck in a way that skip never jacked you up in. Well excluding beta and close to release jump skipping you up an entire hill and off the other side.

And there’s new bugs with the friggin thing. Take a knockback the moment you press it? Congratulations! You no longer get to use it ever again for the rest of the level!

Frankly I’m shocked. We lost Crunch, and to a lesser extent, Unstoppable for this? Crunch! Which would be the single most powerful move with like a tweak to distance was eradicated for a 50% damage increase and a move best used to commit to the extermination of the self.

I said all risk, moderate reward, but the reality is, a failure is no reward. Combined with damage from sources outside of your control? Just take IB and sit your posterior in a hallway. Still has its strengths, but enemies defensive attributes outscalled your relative gain even through your higher relative t.hp regen. If you can stomach playing a certain way, it’s still frankly the same skilled required job, but that level has been just raised extremely high.

ESPECIALLY with the frequency of spawns of specials

Obsolete is a bit of a strong word. More of a glass cannon? Maybe. But definitely not obsolete.

Or just pick grimnir’s focus, spam light attack’s to proc 50 % damage reduction every 2 seconds and apparently its “working as intended”. Enjoy there is your DR back.

How to buff Slayer

Bam! Old durability is back.

That’s a bit too strong. We’ve got the easiest t.HP gain in elite killing. The only danger Slayer has relatively are accidental big hits and nigh-unavoidable poke that’s all the rage with fs these days.

125 health would fix this.
OR
Moving target would help this.
OR if they want us to remain glass cannons
Crunch could help this
OR hell if they’re not adverse to doubling up
giving us RV’s 30% damage reduction on headshot would REALLY help us
The conditional on this 50% is garbage when the damn thing doesn’t auto refresh until the duration expires. Also doesn’t proc on shove attacks

I don’t like everything FS did to Slayer, but you’re writing off the killiest class in the game and saying Ranger Veteran can outclass that with a hammer and shield.

Look, just take Grimnir’s Focus for the moment (it activates on light attacks) and keep poking Fatshark to revert his ult changes and upgrade his base health to 125.

That’s a bit too strong. We’ve got the easiest t.HP gain in elite killing. The only danger Slayer has relatively are accidental big hits and nigh-unavoidable poke that’s all the rage with fs these days.

Well, they could trial it out and if it’s way too strong increase the max damage taken by infantry per hit to 15.

The Slayer definitely needs that extra 25 HP though, he’s waaay to squishy without it and it makes his THP on kill technically weaker, since his max HP is lower, thus he can’t store as much THP.

My suggestion: 125 health, passive 20% dodge distance bonus. Oblivious to Pain is worthless because elites dealing huge damage to you isn’t your issue, since you excel at elite killing. Bane of his existence is chip damage from hordes (which is kinda broken right now, anyhow) and no bad defense against specials (especially disablers).I like the suggestion with limiting infantry damage to 10 per hit, or literally letting him “ignore pain”: getting damaged grants you invulnerability for 2 seconds.

Slayer definitely got hit harder by the nerfs to the two berserker classes than Zealot did. In fact with Zealot’s +15% healing per fiery faith stack talent and his new AS talent + others Zealot’s more-or-less as good as he was before, and he was overtuned.

Bringing back Crunch! and bumping Slayer’s HP up to 125 would be good.

Other than that he remains the AS and melee breakpoint powerhouse of the three dwarf careers.

Slayer is fine, learn to play with the balance changes.

Before he was a bit OP. you could just spam attacks and eat hits left and right knowing your OP damage reduction, insane temp health regen, and ridiculous attack speed would balance out the damage. Granted, it did feel pretty slayer-ey to just rage and attack like a maniac… which you can still do you just have to be a bit more tactical about it. Having the option of throwing axes helps him to feel a little more rounded too.

I’ve been running a lot of slayer over the last many patches, and he most certainly isn’t “obsolete” , just different. In a good way I would say.

Lol wut? If you can’t survive on your own the distance of a max leap away from your team… and can’t use leap to rescue a teammate? Do you even slayer?

Bounding leap is freaking AWESOME and is quite possibly my favorite of all the new talents in the game. You can close distance with all kinds of things, saving teammates, distant specials, not to mention escaping from unfortunate situations. And it’s SO FUN!

Footage from one of the betas when cata was way overturned and I was getting used to the new slayer, but I still lasted alone for quite awhile with some special elimination helped by the space created with the bounding leap 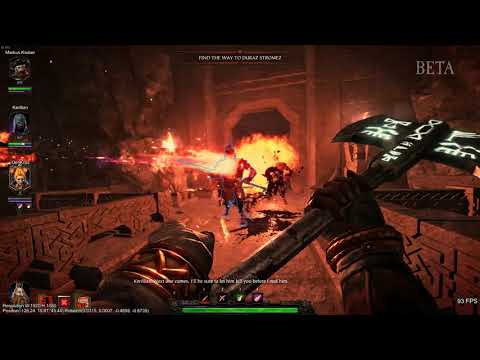 4 minutes of footage to show you jumping into the corner and dying. Exactly what I said would happen. If there was a point to be proved here I’m missing it.

agree,new slayer is too weak.

Lol, people see what they want to see I guess.