Slayer is pure joy to play

Slayer feels simply amazing to play. Leaping into a horde, slicing and dicing as you dodge blows to come out without taking a single hit is simply pure, unadulterated joy.

The look and feel of the double axes, the GRIMNIIIIIR that blurs out your vision, the absolutely glorious block attack on the axes, everything about this career feels just right. Whenever there’s a horde about, I just can’t keep this stupid grin off my face.

I’ve never realized how much I needed to play a berserker in first person until Vermintide 2. Well done, Fatshark.

You forgot to mention the part where you get dragged off in to the sunset by a pack master after GRIMMMMMNIIIIIRing into a horde.

Or maybe that’s not you, just 99% of the rest of the slayers I’ve seen xd

Sadly, he only works because the heropower is bugged. Without that, he is ALOT weaker and less fun to play.

Honestly he feels a lot more useful to me in the beta. Granted I’m running the 2H Axe as my main instead of the dual axes, but yeah the change in cleave/damage means that 2 different melee weapons serves a real purpose.

J_SAT has expressed the exact opposite on the reddit. Pretty big name and he backed it up:

Not saying he isn’t really viable anymore, but melee being weaker, he is inevitably hit harder than other carreers and heroes. While I definitely wouldn’t question his expertise, a truly high skilled player like him and Grim can make anything work. What he is expressing about Slayer, he could do on live too, but better. He is still alot weaker than he is on live, and neither J_Sat nor Grim say something about that. They say he is very viable on beta, which is true. I’d still say he needs to be closer to where he is now than on beta. Just my own experience.

What’s happening is the new stagger ratios made certain heavy weapons suck at their intended purpose, and many of those are available to slayer, so from that POV he has indeed suffered a loss. On the other hand, with armour being so prominent on Legend, killing it and bosses Asap has become a necessity. And that’s where a good Slayer can really shine and why his role is much more pronounced in beta than in vanilla. I think Jsat shared this sentiment in his post.

Not saying he isn’t really viable anymore, but melee being weaker, he is inevitably hit harder than other carreers and heroes.

I’m going to take something straight from J_sats post, bolded as he bolded it:

“Melee Meta: the changes to stagger hurt melee but I believe these will be reversed. I do NOT believe we as a community have fully explored the meta yet e.g. slayer is beastly strong and people just don’t know it. The full melee blender party (WHC/Slayer/Handmaiden/Knight) brings the package of elite dps/horde clear/mobility necessary to clear anything (though weak to A1 and final boss), but requires 1) each player to have the mechanics and game knowledge requisite to execute melee in v2 2) relies on small but cumulative synergy in loadouts i.e. even one person swapping from this party comp weakens the rest and 3) relies on all 4 players playing aggressive melee together to screen, protect and bully enemies together. It will take time for this meta to emerge.” 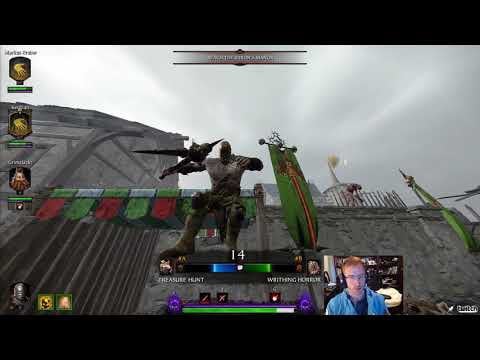 You’ll notice that in that post he acknowledges range is overall stronger, but he actually rates slayer very very highly in comparison to other melee. He just considers melee to be less easy and require more coordination to achieve the same effect as ranged essentially. But within the melee meta he consides Slayer quite strong.

I kinda have to agree. Just playing as a homicidal mad-dwarf beserker alone has been worth my $30. The rest is all just gravy xD

Might me, might not be. He is still hit harder than other heroes from melee “nerfs” and to me isn’t as much fun to me. Doesn’t really matter to me how a player of his profile rates him in terms of strength, really. But I get your point.

Guys it’s not all about who can hit the hardest. Give me a break!

i really love the Slayer, but i never pick him because of his suicidally bugged ice-skating leap.

If the meta wasn’t so ranged heavy I think Slayer wouldn’t get made fun of as much. The biggest problem the slayer has is sharing the same character as Iron Breaker.

I’ve seen some high level play as a Slayer, but you need a group designed around him. Quick Play doesn’t allow that so he will always be the lesser of the dwarf classes imo.

He only needs some minor tweaks to “fix” him imo. Fix the sliding after leap and make him invul while leaping. He wont break the ranged meta down but he will be in a solid spot at that point imo.

Love him too, but very often he feels useless, because the ranges can kill everything way faster and even befor you reach the enemys …
A long time i was the one who killed all elites in one or 2 hits. Now its ranges oneshotting several chaos warriors at onces . wtf
Slayer is cool, but not very effective. Even if you play good he is on the lower steps of the dmg ladder.

Here’s the thing… ranged is better. That doesn’t make the Slayer less effective, that just means his role isn’t stacking up kills. This is why people are complaining about the score board at the end of the match, it gives a false sense of importance on kills rather than playing as a team.

The Slayer’s job is to protect Sienna, and to a lesser extent the other ranged classes. Don’t over extend. You pick off the mobs that get past her ranged or try to attack her from behind.

The goal is to beat the level not top the score board. I get that this may not seem like the most fun thing to do, but unless you’re running a full melee comp that is his role. If you were playing an IB I’d give the same advice. Protect the ranged. Yeah the IB has good horde clear but letting Sienna deal with the Horde if you can and protecting her will make the group more successful.

Slayer is amazingly fun to play in champion and below. He needs an increase to his health pool to be viable in legend.

There should be no class that has to " protect" a special character. Yes a tank should be there to protect the group or whatsoever. But you cant say “Slayer” should protect Sieanna. This only shows which character is to strong and which one is a little underpowered at some point.

What do you play ? Let me guess : Sienna

There should be no class that has to " protect" a special character.

This shows that you don’t understand VT. It’s a coop game. Not a “I’m gonna get my kill game”. Protecting the ranged DPS so they can clear waves is how it works. You don’t have to like it, and I hope that meta changes, but that is how the game is currently designed.

What do you play ? Let me guess : Sienna

Bardin is my main but I’ve been leveling Sienna to see how I can best work with her in my group so she’s 22. Nice try though, assume I play the character I want protected in order to try and make my point less valid.

Dont be that much offended. I understand your point and of course its a Coop game for me too. But still in my opinion there is some wrong balancing on the characters right now.
As a slayer you dont have much to do with good ranges.

Guess why i want to play a slayer ? Because i want to fight in closecombat. Fight big enemys and spread their blood.

Guess what slayer with a good group is doing ? Taking a 2h Hammer and clearing waves if not Sienna for example burns them from distance. And when i dont want to get friendly fire i avoid Line of sights from the range characters, that they can do their job ( coop gameplay )

But this ends in a situation where you dont have that much to do as a slayer.
Ok heroic deeds look a little different. For example more elites with double health etc. But a character shouldnt have full action in only one missiontype.

I take this as serious as you do and apreciate your ideas about how to play this game ! We both want to like it and have fun.