Issue Summary:
This has always been an issue but needs sorting before WoM release for sure… but today alone during a game in horn of magnus, Berzerkers, Monks and Stormvermin… not small enemies… were spawning INSIDE of the pyromancer… killing her stone dead in one invisible hit. Over and over. Hyperdense hordes fall inside the players and become immortal until they’ve killed you. Enemies are just deciding when they have physical presence and when they don’t. One time today, 12 special appeared inside the pyro- the zealot clipped right through them, they killed the pyro…, THEN BLIPPED OUT OF EXISTENCE! Then hyperdense appeared ontop of one another just as the zealot has rescued the pyro- just to exist to kill her again then blip out of existence leaving the zealot on her screen going WTF?!
PLEASE fix physical presence issues.
Also please fix hookrats and stop assassins just spawning on top of players, make them have to pounce. And make hookrats have to actually hook you instead of hooking players at 90 degree angles after dodging and clipping the player to a spot inside the hook… same with leeches sucking you through walls and round corners and having you teleport into their succ after you dodge.

[Attach a Screenshot and/or Video Evidence]
(Screenshots and/or video evidence (if applicable) can be particularly helpful. To upload, click the ‘Upload’ icon within the post controls.)

[Attach Your DxDiag]
(Press ‘START’ and enter ‘DxDiag’. Select the DxDiag app and allow it to load. Once loaded, click the 'Save All Information…" button and save to a location of your choosing. To upload, click the ‘Upload’ icon within the post controls.)

[Attach Your Session Console Log]
(Navigate to C:\Users\YOURNAME\AppData\Roaming\Fatshark\Vermintide 2\console_logs and locate the log that corresponds with the particular session in which your issue occurred. To upload, click the ‘Upload’ icon within the post controls.)

Enemy collision has been a HUGE annoyance in this game since the Closed beta test back in February of last year.

It does need to be acknowledged, addressed, and fixed.

As it is right now Enemy Stacking is a particularly major issue, letting 5 or more enemies occupy the same space and attacking all at the same whilst your character, depending on weapon choice, can only cleave through at most 3 of them at a time. Now this isn’t an issue in a controlled environment but when put into context of more than a handful of enemies doing this all at once it tends to become a bit of an issue, forcing players to do a constant game of backwards dodging and blocking to be a…

are you playing with lag? or does this also happen in hosted games?

Issue Summary: I have instantly died when I collided with an enemy corpse. Take a look at the video evidence Steps to Reproduce: I haven’t tried to reproduce it. Reproduction Rate (Choose One): Once Additional Information: You can see the exact place where I died if you take a look at the above linked video. [Attach Your Session Console Log] console-2018-10-07-19.07.56-957E5FDA-69E1-46EB-8FC8-4629.log (953.6 KB) [Attach a Screenshot and/or Video Evidence] [Dying upon a colli… 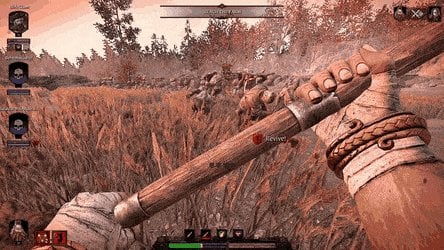 r/Vermintide - Getting tired of enemies attacking through other enemies

None of which was ever acknowledged by a Fatshark developer or customer service representative and all were made when the game was released.

The problem still persists but at this point, I don’t think it’s ever going to get fixed.

Even if it did get fixed, it would too late.

Just got hit by a Mauler’s sprinting side swipe, through the back of a Chaos Warrior. Also seeing enemies spawning right in front of us, in the same game.

I think collision got much worse in WoM beta. In 1.6 you can see the slot system working mostly, even a little bit in more chaotic situations. Clipping also happens rarely. (unless you waterfalling yourself)

In WoM beta the slot system kinda totally turned over. The waiting pools are working nicely, but the slots just next to the players fill up with several times more enemies, even without intense player movement.

Now you add the new stagger mechanic, the unrewarding dodge system, and you get an expansion that i wouldnt buy after 1000 hour of vt2… (I simply couldnt have fun in beta. Not because of losing, because that happens in live too. But because the meele combat itself became a frustration, ranged even more, and skill got “nerfed”… )

I’m absolutely terrified about the WoM because the game is still P2P and if you get a host with not so good internet, it’s going to make all these changes even harder.

Plus I really don’t see anything in the WoM beta that I like so I most likely will not buy it.

All I see is a new difficulty, weapons I’ll never use, having to start over and grind for new weapons, having to grind to be able to collect enough essence to improve those weapons, and playing the same maps I’ve already been playing for the last year.

What exactly are we paying for? It looks like they just redesigned the whole game but is only charging for beastman and the Cataclysm difficulty. Everything else looks like it should already be in the base game since it appears to have taken little effort to create as they are using the same maps for The Weaves. I’d rather buy new maps or more V1 revamp maps.