Being a half of Ogryns arsenal the Ripper guns are not really enjoyable to play because of the abysmal mag capacity. Why would i ever deploy the stabilizer handle with such a small mag capacity? The Stubber and the Grenadier Gauntlet deal much better in close quarter than the Rippergun and thats sad because its literally a shotgun. Its already a short ranged, inaccurate weapon, double its magazine capacity and let us enjoy using it instead of reloading every 5 seconds.

When scrollig down you can see my MkV comapred to MkII. Mine has higher Firerate and smaller Mag which makes no sense at all. I have less DMG also.

OP has a viable point and i agree aswell. 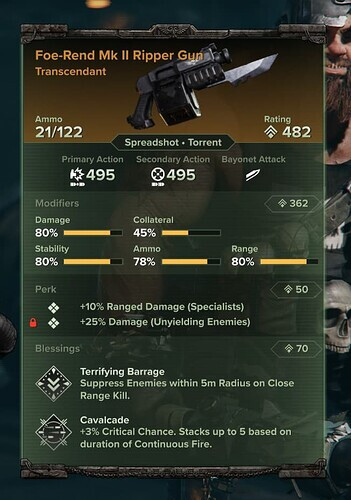 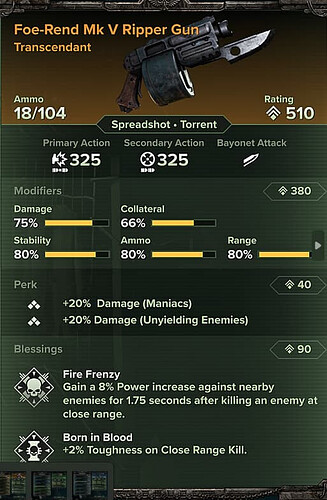 What is the point of this topic?

To ask the Devs to make the Rippergun more enjoyable by giving it more magazine capacity. Hope this helps. 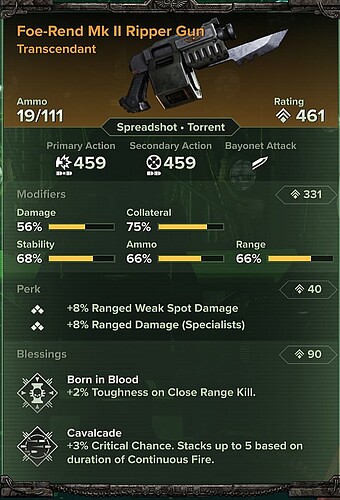 As you can see here, this is from Sire Melks shop. Clearly if you comapre it to the MkII on top of Post it Scales Mag with Level/ Stat.

Leave him be, he has time to waste. And Clearly in this Forum reading and understading is too much to ask for nowadays. Unlike V2 Forums wher you can actually Argument and dont get insulted or get Counter Arguments or Constructive ones at that, these Days are gone. Now Peopz are just pissing all over others because they are all pissed and have nothing to say!
I made a bad title first yes, but i corrected it. I just had a hunch and i was right. Seems Rippergun Mags are bugged on MkV or so it seems.

The ripper mk2 is the ripper. The other variants are filler that got added for a quick holiday game release. They are worse than the mk2 in all aspects. Just be patient, this still will get patched out.

I just cant understand reason “why” u need to create of topic that already exist. In top of that u already reply exacly same opinion in first one.

Im already have been a moderator once. So its just triggers me a lot.

Who cares if you have been a Moderator
Are you now?!..
NO

Again, the other Topic is about having Bigger Mags.
This is is Connected yes,

its about possible Bug!

FYI i posted the other Topic casue hes right. Also he brought me up to this “Bug”. But theres no mentioning about it. That was not the point.

SO as a “Ex”-Moderator you should know better than go into a Topic and just post useless thoughts.
Either be Constructive or leave it be ^^

What do you mean, what will be patched. Removing of Mk Variation you mean?
i think Blue version are a waste yes, the other 2 are fine. We are way into it, to remove all Versions except one iMO. You could replace the Blue ones people have and make them other Variatins maybe? But which one and even possible?

Yes what are you talking about exactly. Weapons have differetn stats, we all know that.
My point is Scaling Mags. As you can see and read. Mk has scaling Mags, MkV doesnt. Also it doesnt have bigger Mags as it should.

Like I wrote, many weapons (same weapon type) have different stats and mods…Example, Catachan sword can make more than 200 dmg in heavy attack while another Catachan makes 100+ dmg.
Some weapons have bigger magazine than another…etc, that depends from version.

Yes i know what u wrote, but what was your point to write the obvious?!

You’re just pointing that different versions of Ripper gun have different magazine capacities and you ask for more capacity.
Ripper is not the weapon with the lowest capacity and it’s one of the best range weapon for Ogryn, so that would be unfair and ridiculous as all weapons already need some fixes to be balanced.

Aside from that, different stats and mods for same weapon model is not only a RIpper matter. Is that a bug or wanted as it is…I don’t know but that’s obviously nonsense or not, as they are different versions of the weapon…and some versions sound better, that’s all!

We can point a lot of similar problems with stuff in this game…and I don’t think they’ll change so many “weird” things because that’ll be a lot of work.

But the most important problem in weapons is Bolter can’t be used by an human (normal one)!

No, not remove blessing levels. I mean patch the guns so the MK variations are on parity with each other. Right now, the ripper gun for example has 3 mk variations, but MK2 is WAY better than the other 2. It is SUPPOSED to work that the 3 variations are equal in value but different in playstyle but the game was rushed out before a LOT of balance work was completed. Down the road expect one of the MKs to have variances in damage, ammo, stability etc. that are balanced so you can enjoy any of the MK variants.

For now, the answer is only use the MK2, the other ones are garbage.

Yes bigger Mag would be Good.
And yes and no, point is that as you can see on the Picture AND as i wrote. It makes no sense that MkII with highest Damage has the highest Capacity. Also it does Scale with Stats unlike MkV.
Weapons with highest Firerate should have highest Mag cap not vice versa. Like in any other Game or as FS did it in V2. I didnt need 3 Variations for every Weapon but thats what we have and then at least make them right. Ther is no point using a MkV over a MkII other than like me having a maxed out one.
Again, Mag does not get bigger with Stat on MkV unlike MkII. Thats what i pointed out if you read all of it ^^
THATS THE POINT!

Bolter can be used by Humans, obviouls yes.
Its a scaled down Version Lore appropiate. No problem at all. Legit as it comes.
If im correct its the Adeptus Arbites (Police/ Judge Dredd) Version of a Bolter.
There many Variation.

Sisters of Battle use Godwyn pattern, also Scaled down.

Astartes USED many different versions with smaller “Bullets” or then one Standar as it is. But these with smaller Caliber are 30k Bolters.

Thats my Point exactly. What i wrote in the Topic i posted aswell. And others have also.
THis why bigger Magsize especially for MkV like i posted the Picture from. Makes no sense having the least Dmg and the lowest Magsize…

I use the MkV since its 380 and thats it. Its okayish but not as Good as like yourself said MkII.

No! Sorry, but in 40k universe, bolter can’t be used by any human, there’s only a real bolter version (i don’t talk about gadget or toys) and if an human uses it, he looses arms and everything. A bolter shoots bullets as big as grenades are!

Anyway if that’s a toy version, that should be pointed^^ And i need some sniper rifles with real scopes for sharpshooter, otherwise just change its name, that’s not a sharpshooter! Or just add some scopes on some weapons like Zarona adding a bigger magazine for it as well. This about, how come a colt like has only 5 bullets? Does the owner keep his money in the 6th chamber?

Sisters of battle are not basic humans, btw.

^^
Adeptus Arbites are Humans! Bolter version is exactly that.
Disclocated Shoulder, Broken Arms etc. But that is Astartes Version of a Boltgun/ Bolter. 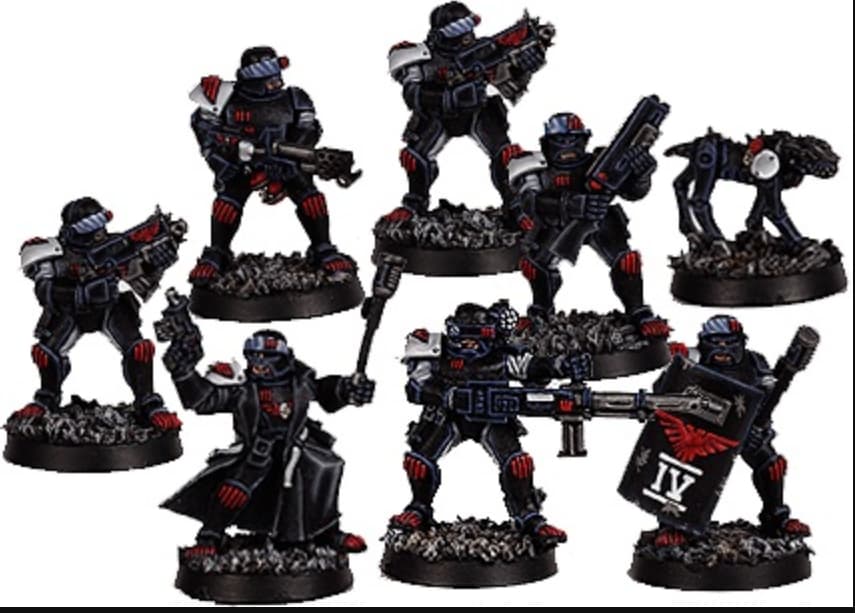 Sisters Battle/ SIlence are Humans and no Transhumans. THey only use Bionic Implants.
Only Astartes are! So Godwyn counts in that regard aswell… Humans
Sisters use Stormbolters aswell

They still Count Humans as do Adeptus Mechanicus even as Cyborgs who can live 10k Years +, Implants
Bionics/ Augmetics or not

PS: the Stubber Revolver probably has different Patterns aswell.
In the Eisenhorn Books he uses a Concealed Stubber Revovler, but it has only 4 Bullets since they are big as f…