Surely we are strong enough to carry a larger bag of spare cartridges when we can carry multiple mags of bolter ammo, which are larger on an individual scale?

The revolver is a super fun weapon to use, with a reload that is slow, but individual enough where we can stop after two shots and throw them out as needed. But for some reason it’s the most ammo-anemic gun in the game. We won’t erase your hordes, we just want to make heads vanish at a reasonable five pops a cylinder.

Give us the ammo to make Inspector Harry proud. And the heretics unlucky.

i guess the question is , do you feel lucky? 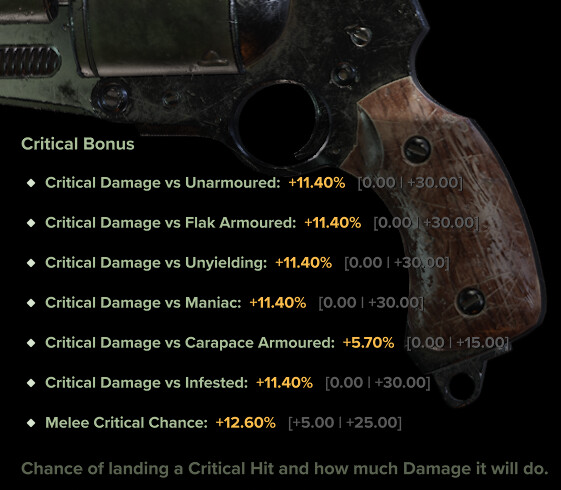 Or better yet, increase the damage significantly, so we can get more value out of each bullet, and not have to use an entire mag to kill a special on Heresy+.

The single target damage of the revolver is quite nice, but indeed drops off on difficulty 4 and 5. But so does every other gun. Perhaps increasing the crit damage helps there? Small mag, slow reload + Heavy crit potential. As the percentage up in the image show, the max bonus is only max 30% extra after the normal double damage, which may be part of the problem. It has blessings available that help the crit chance. But not crit damage.
Over all, the weapon needs some love, but base ammo is ridiculously low. 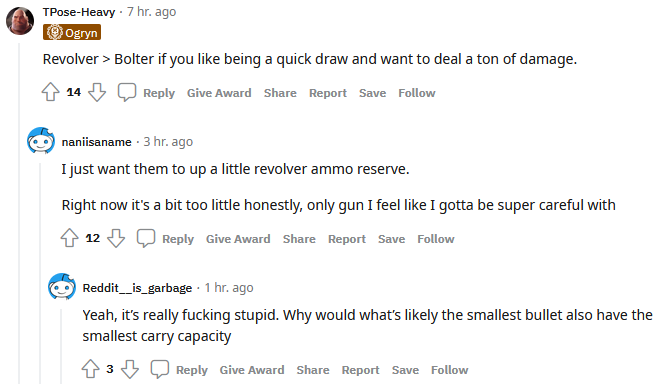 Build it for crit ? I mean you can get it to 30% crit chance on wpn stats itself, add crit perks to that and you probably look at a crit shot every 2 shots. I agree with more ammo request. Furthermore remember Revolver has unlimited penetration, however that sounds, it dmg anything in line.

When you say build it do you mean grind it for perks with the rng system?

The penetration does seem to get stopped by unrelenting enemies. I couldn’t shoot through the Scab Rager in the meatgrinder, for instance.

I mean buy a green or white with high crit bonus. Yes, I know majority of crafting has not been implemented yet, but we will be able to re-bless the wpns soon.

Buy weapons with good stats when they appear. 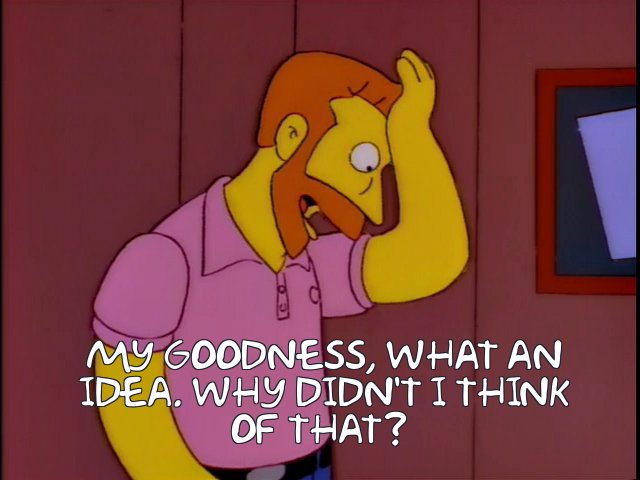 No need to be salty m8, simply becasue someone does not agree with you.

I don’t think the weapon needs to only function well with good perks. It needs to be good at base. I also just prefer my weapons to have reliable, and dependable damage. I don’t want to rely on RNG for my damage.

The unlimited penetration is useless as far as I’m concerned. I don’t use it for hordes or anything.

It functions very well on lower difficulties (up to 3), but on higher ones this is where your build optimisation kicks in. That includes wpns and character traits.

Other weapons such as the Kantarel XII and the Boltgun function well without “build optimization” on higher difficulties. There is no reason why the Revolver should be any different.

Also, I tested and it doesn’t have “unlimited” penetration. Many elites stop the bullet.

One other detail to consider that the side effect of having the lowest ammo reserve in the game has, is that it actually makes the ammo pickup in each mission rob the team of shots-fired potential.

Since each small ammo box is a 21% of max ammo, a revolver user creates a situation of: “Why should you take the ammo box? It will only give you a few shots, when everyone else can unload with it.” 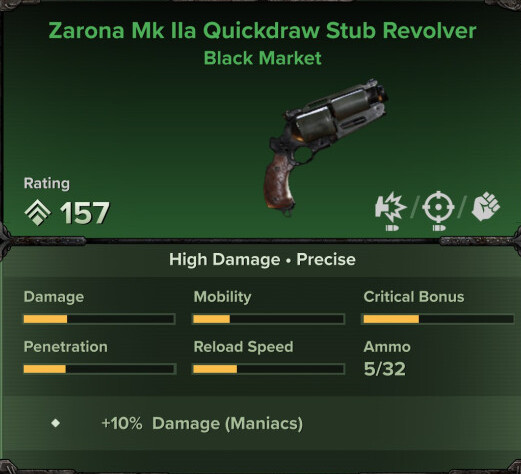 Currently at 37 shots base, an ammo box is just 7 or 8 bullets depending on how it rounds the percentage.
Double the base ammo, and that is a stark improvement on the entire team’s ammo economy.

Kantarel is pretty weak against carapace armor, revolver is the opposite. Not sure it is a fair comparison as these wpns have different use in the game.

This wouldn’t be an issue if you had much higher base damage. It’s the “damage-to-ammo” ratio that is suboptimal here which is causing this issue.

Well, that and the “ammo-to-fun” ratio where people can actually enjoy and practice using their gun before it’s all empty, of course.

Yeah, that is for sure, no arguemnt there.

Do you disagree? Do you think they both gain the same amount of viability from optimization?