DISCLAIMER: What you’re about to bear witness to comes from the darkest, most depraved recesses of my mind - evidence of my steadily decreasing sanity and spiralling descent into madness, where I actually unironically think the idea of a big, smelly, pseudo-Mongolian brute is not only appealing, but genuinely sounds cool. Anything written here about this barely human being is thus a product of my own degeneracy as a barely human being. Viewer discretion, depression, and/or erection is advised.

Also, if not already painfully obvious, this post is mostly meant as a joke. Do not take anything written here dead seriously (an Ogre hero would be frickin sweet though).

Lore, if it even matters:

Olsgolon is an Ogre from the Mountains of Mourn (unsurprisingly), that lived under a cowardly chieftain. Though the Tyrant of his tribe was weaker, Olsgolon knew that if he challenged him, he wouldn’t face a fair fight. Instead, Olsgolon left the tribe to seek his fortune elsewhere, and journeyed west to the lands of the Old World…

Like most Ogres, he’s big, he’s T H I C C, he’s smelly, he’s not the brightest (though not terribly stupid either), he eats a lot, and he beats the fecal matter out of things, before eating them shortly afterwards (and then he eats the fecal matter as well for good measure).

As explained further down below, Olsgolon will, canonically, join the Ü5 around the same time that they manage to escape from Rasknitt (the Tutorial level) and get to Taal’s Horn Keep for the first time.

Reasons why I believe an Ogre is a decent choice: 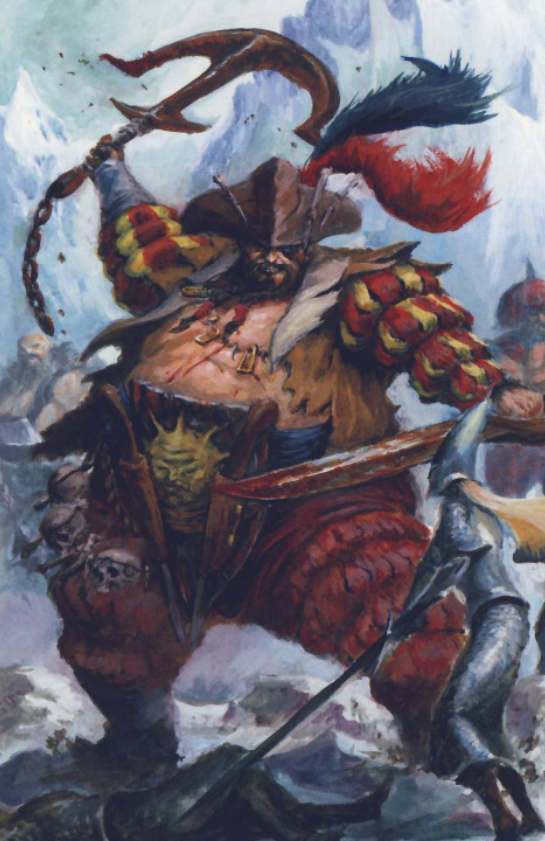 (Yes, this is a Pirate Maneater, but I couldn’t find any image of an Empire Maneater that wasn’t a miniuature. Just imagine him in a Mercenary Kruber-esque outfit, massive codpiece included.)

Shortly after reaching the Old World, Olsgolon took up the occupation of Maneater, offering his mercenary services to the highest bidder. He soon found himself in the employment of wealthy nobles in the Empire, perfoming a wide range of jobs from personal bodyguard to soldier on the battlefield, and carved out a name for himself as an efficient - albeit a bit unpredictable asset. His latest job includes being hired by a former innkeeper-turned-guerilla fighter that has a small rat infestation that needs taking care of…

Passive - Hunger: Olsgolon has a special Hunger meter (shown as an Overheat meter). Melee killing blows grant 1 Hunger from small enemies, 5 Hunger from medium enemies, 10 Hunger from large enemies, 20 Hunger from Monsters, and 10 Hunger from Critical Strikes, up to a total of 100 Hunger. Olsgolon gains 5% increased Power for every 20 Hunger. Upon reaching 100 Hunger, Olsgolon goes into a Rampage, gaining uninterruptable attacks but losing control of the character (basically, a bot will take over and the only directive it has is to charge into the nearest group of enemies and wreak havoc) for the next 10 seconds. Olsgolon cannot gain additional Hunger while in a Rampage, and any Hunger he would’ve gotten is instead converted into temporary health. If there are no enemies nearby, Olsgolon will start to attack his party members, but will only deal damage equal to 10% of what he normally deals. Olsgolon gradually loses 10 Hunger every second after having been out of combat for 5 seconds, but can also supress his urges by holding down the Reload button with a melee weapon out (similar to venting Heat).

Career Ability - Battle Shout (120 second cooldown): Olsgolon lets out a battle cry, expending all of his Hunger to increase the Power of himself and his party members by 5% for every 25 Hunger for the next 5 seconds. This ability is automatically activated upon reaching 100 Hunger without incurring the cooldown. 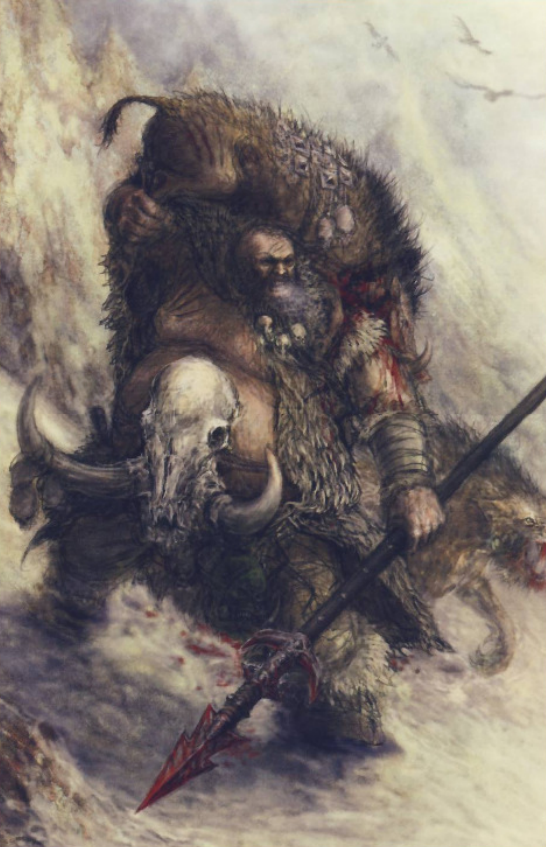 During his time spent travelling westwards, Olsgolon had to make do with everything he could in the wilds. Hunting the great beasts of the Mountains of Mourn has shaped him into a force of nature, and with the threat of the Skaven and the Northlanders, Olsgolon decided he would put his hunting skills to good use, taking down the biggest quarrel the Ratmen can throw at him. Though a solitary individual, a hunter is never truly alone…

Passive - Beast Master: Olsgolon is accompanied by one of the pets he domesticated during his time in the Mountains of Mourn. The pet has a percentage of Olsgolon’s maximum health and regenerates it slowly over time whilst out of combat (represented as an Overheat bar for Olsgolon). The pet also has a percentage of Olsgolon’s Power, and has a percentage of his movement speed. The pet automatically attacks on it’s own, but tagging an enemy causes the pet to focus them down. Using the command “Help!” will cause the pet to abandon its current task and come to you as fast as possible. The Pet gains damage reduction according to the difficulty: 20% for Recruit, 30% for Veteran, 40% for Champion, and 50% for Legend. Level 5 Talents changes Pet, but defaults to Snarler.

Passive - Monster Hunter: You and your pet deals 20% increased damage towards all non-man-sized enemies.

Passive - Predator and Prey: Tagging an enemy marks them as Hunted. You, your pet, and your allies gain an additional 20% increased movement speed towards Hunted enemies.

Active - Bestial Wrath (120 second cooldown): Olsgolon’s pet works itself up in a frenzy, doubling it’s damage output and becoming invulnerable for the next 5 seconds. Bestial Wrath cannot be activated if the Pet is currently dead. 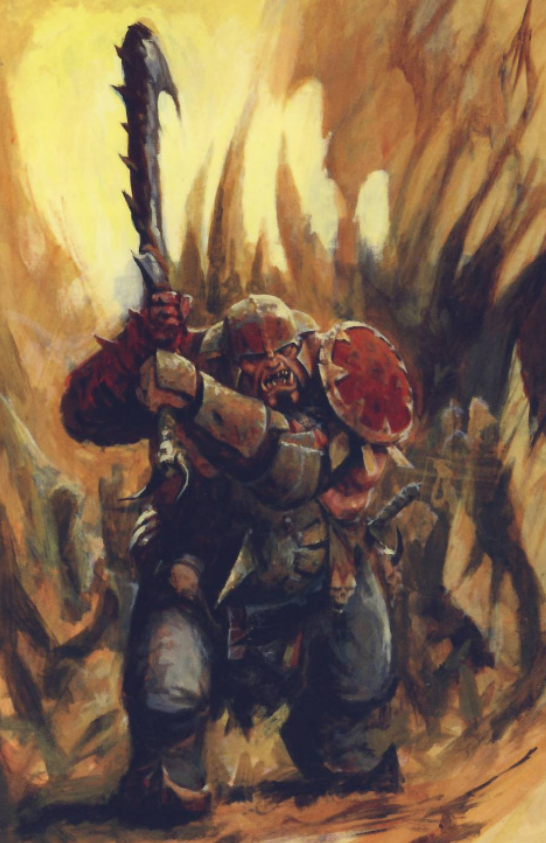 After securing himself a vicious streak by stemming the tide of ratmen, Olsgolon was named Irongut, even though it had been years since he was last part of a tribe, and the title was self-proclaimed. Nevertheless, Olsgolon outfitted himself with the best weaponry and armor he could find - equipment he never got under the leadership of the cowardly Tyrant. Who knows, maybe when this rat-business is all over, he’ll go back and kick the weakling out of the tribe. His tribe, that is…

Passive - Gut Plate: Olsgolon has a shield by default, and can wield any weapon in addition to the shield. Additionally, Olsgolon can attack whilst blocking, but it costs him 1 Stamina for each light attack, and 2 Stamina for each charged attack. Olsgolon can shove by pressing the special attack button.

That’s it, really. Just a big ol’ brute that goes around and beats the crap out of rats.

Forgetting what you just read might take up to 3 hours worth of flagellation. Sigmar provides.

If you, for whatever reason, have anything to add to this, please do so down below.

Have a not-terrible Rhyastag my countrymen. Deus Sigmar.

Fatshark do this please!