Since this map is huge and we give nothing extra for playing it, instead of play the map people are skipping it by killing themselves right at the start. My question is obvious, what FatShark would do about that? Some players thing we could receive Double Loot after completing the map, others players that I know think it’s better to increase the XP for distance, something like that to give us a reason to play Skittergate.

Xp for distance would be a good fix I think. Or maybe a larger spawn rate of sack rats for loot die.

Really, even a big buff to boss QP maps would be fine - they’re random, right? So you can’t farm them. But if they did give a lot more loot people would be happy to try them.

It’s not just Skittergate, people suicide on Into the Nest and Halescourge too. Besides the poor risk/reward ratio these maps are simply not fun; Skittergate and Into the Nest still suffer from some very serious bugs and the boss design severely punishes melee or builds with little armor piercing damage.

What we have where is not a lack of desire but a lack of faith. The Chaos Gods seep doubt into the hearts of the weak. It envelops them with the embrace of despair and causes them to take the easy path out!

What we really need are signs next to the cliff that say “Sigmar Loves you” and “Everything will be OK”.

That should help boost morale.

Into the Nest it’s a fine map with a hard Boss to deal, in my opinion, Spinemanglr is the hardest Boss in the game, but that doesn’t mean it’s impossible to beat. I can tell you for sure, Into the Nest it’s the map I have less victories, mostly because we start the Boss Battle without ammo.

Halescourge has a similar situation but this Boss is fairly easy if you hit him from distance. In all my characters I have a nice ranged weapon, and if I will fight against that Boss, I go ready to deal with a ranged fight. Anyways, those poison spirits, or whatever the name of his attack is, is hard to deal when you are a melee player, that’s why I tell to my team to the melee ones deal with adds while ranged ones deal with the Halescourge.

I never saw people skipping Into the Nest neither Halescourge.

People are skipping also Hunger in the darkness, that damn barrel is still bugged.

Literally one of the easiest maps. Just have the host lug the damn black powder.

This guy illustrated the current state of Skittergate perfectly: 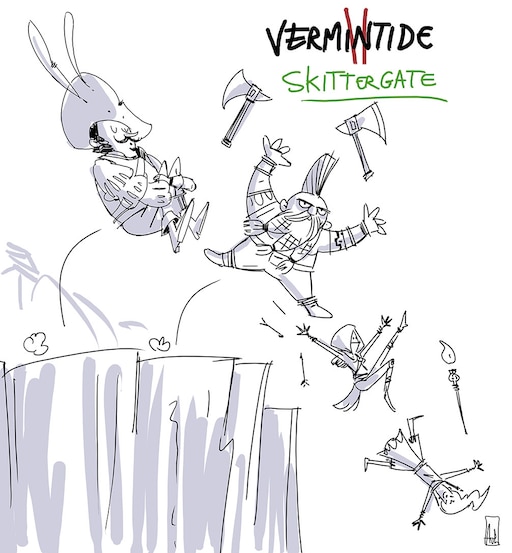 Yes… often barrel doesn’t spawn. I can take one from previous zone, but sometimes it explodes without reasons or an enemies spawns on it.

Protect whoever carries it well, make sure the host places it -> PROFIT

I know but, for example, a gatling can spawn and hit it… there is some rng.

Would be nice if that long tunnel had a little bulge to the side to help avoid that, but it’s just part of the risk/reward. Grims in general are a lot trickier to get overall this game (Dungeons from game 1 not withstanding).

What about mini 1 item loot boxes for each boss kill?

What about mini 1 item loot boxes for each boss kill?

I’m all for this, would be especially nice on those maps when you manage to get two bosses.

People often skip Halescourge because the boss is still bs. And I’ve started skipping Into the Nest too just because the map is so buggy. But Spinemanglr really isn’t a hard fight at all and doesn’t depend on you have heavy ranged like Halescourge does.

You just block and back away from Spiney’s aoe, kite him around the column if he agros you and kill the adds while you chip away at spinemanglr. Most deaths I see on him are because people don’t kill that single rat that drops down behind them or they just don’t know how to kite him. But I’ve had plenty of times killing spinemanglr with just one or two survivors doing 50+ plus while others are dead. Since you can reasonably duo/solo Spiney he isn’t that hard. Can’t really do that to Halescourge though.

Blockquote
“It’s not just Skittergate, people suicide on Into the Nest and Halescourge too. Besides the poor risk/reward ratio these maps are simply not fun; Skittergate and Into the Nest still suffer from some very serious bugs and the boss design severely punishes melee or builds with little armor piercing damage.”

This pretty much sums it up, boss maps force you to play specific builds which can actually significantly damage the boss and punishes anything else because you cant do much damage. The other issue I would say is that there is no way too filter maps on quickplay, and if you get a bossmap while playing a career that cant do much against armor let alone not having the correct weapons equipped you are in for a painful experience.
Also the rewards you get on boss maps is not worth the effort , you have a much higher risk to reward scenario playing those maps which honestly there is no point when compared to other maps. They should at least include a weapon cache at the start of the maps allowing groups to change weapons if need be or even careers if that would be possible. Not sure why they removed the weapon chest at the start of the map which VT1 had.

xp is only of use to some people (it being the only source of cosmetics is not enough motivation for me) , i for example would still be skipping it
extra loot would be better maybe.

but for me the issue is its a bad map , its long its ugly its boring and then at the end there is a very unfair fight .

redo the map , or give us the ability to blacklist 2-3 maps out of the pool and have quick play try and avoid those maps