Look at this big chungus of a Nurgle-worshipper.

It’s an AoS unit, but I can’t think of a reason such a thing couldn’t exist in the Old World. He’s kind of got everything to make a fantastic new elite unit. Very unique look - the heads hanging from the post, the huge belly, the shield and hammer - you could totally recognize him, even if his coloration was more in line with Vermintide’s style. I can already imagine the cowbell-like ringing of his crummy bells as he trundles along.

And he throws rotting heads! I can imagine him attempting to get into melee range, but if players stay too far he starts throwing heads. Long, noticeable wind-up, slow moving projectiles that explode when they hit the ground. Not a lot of damage, but since any damage is pretty bad, it gives him an interesting gimmick. Would also make him harder (though not impossible) to kite, and with splash you’d have to consider what might be behind you that could get you hurt.

He’s got a shield, but I feel like he’d use that to interrupt combos that are too long and shove you back. Armored head, but rest of him is just flesh and flab - so he’s basically just a huge blob of health - not boss level, like, I dunno - 200? 400? I think he could actually go well with the staggering mechanic, since upping your damage through stagger would be a good way to cleave through his HP. Hit him til he blocks, push a couple times to break his block to stagger him, lay on the pain.

And on top of that, he’s got a cloud of flies around him that disrupt ranged attacks! In Vermintide it could just be a flat damage reduction against our ranged attacks - probably could be killed with them eventually, but encouraging players to NOT try and circumvent his mechanics by sniping him would be optimal.

I imagine he hits pretty hard when he lands a hit, but they’d be fairly standard vertical and horizontal swings.

I dunno if it’s in the lore for him, but even looks like he might pop when he dies!

It’s an AoS unit, but I can’t think of a reason such a thing couldn’t exist in the Old World.

It’s an AoS unit, but I can’t think of a reason such a thing couldn’t exist in the Old World 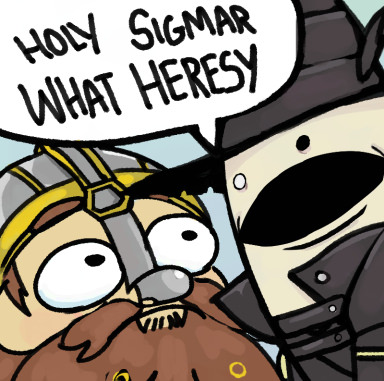 I don’t like AoS either, but this model isn’t dependent on any wonky lore or have a strange look that would be out of place. Looks like something that could have been in the End Times series of models, which had some really nice casts and interesting unit ideas. Seems like the kind of unit that would land somewhere between Bodvarr and the generic Chaos Warriors.

Look at this big chungus of a Nurgle-worshipper.

Upvoted on the premise of “big chungus” alone, but everything else was a really cool idea, too. I love the thoughts on how to disrupt melee combat; I think it would provide great flavor to try and concentrate more of us into melee with monsters/elites. Too often are they cleared at a distance!

Yeah, FS will put him in to game… keep dreaming

But seriously, fortunately GW has to approve anything before is published. Thanks to this, there are no such abominations as “sigmarines” in WFRP.

Yeah, I guess that’s true, it doesn’t look waaay out of place in fantasy.
But a heretic dressed in fancy clothing is still a heretic!

Thank god there are no Sigmarines. But yeah - I don’t consider this likely. I do enjoy just thinking about such things, though!