I am unsure whether this is game related or if it is an issue with my mouse, but I do believe it arose with the latest update.

When I hold LMB to charge a heavy attack, there is often a delay between the moment I release the mouse and the moment the attack triggers.
On flails, sometimes the attack doesn’t happen at all, I can lift my hand from the mouse and still the weapon is spinning.
I don’t seem to encounter the problem on the rapier, but I did notice it on Kruber’s sword.
I’ve tried playing around with input buffer but it doesn’t seem to do much.

This can also be replicated with 100% consistency with Bretonnian Longsword if you hold LMB during the throw animation of a torch and BLS is the weapon you are switching to. Possibly every weapon, this just being the one i’ve noticed recently.

Why is this not getting more attention?
It makes the flails and the firesword almost unplayable on higher difficulties where you need to make every move count.
OK, I have recorded these things, let me compile and upload a video of it.

I apologize for the double post first of all.

I made a video and everything and I thought that I should check the settings and try to eliminate the issue before posting.

@fatshark The issue disappears once input buffer is set above 0.5 (I had it set to 0.2) so the flail no longer gets stuck at heavy 1. Below is a video showcasing this. 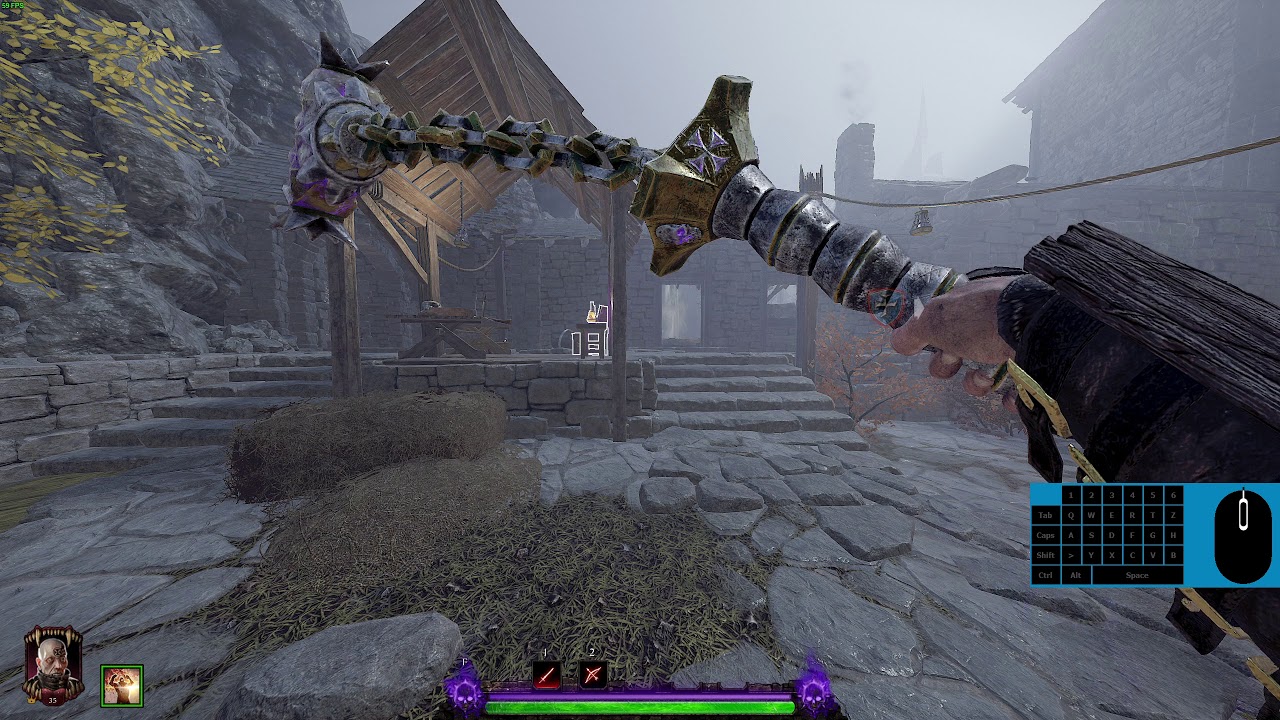 Yes. Have the same issue. The input buffer set at 0.2 doesnt really made much difference.

With waystalkers dual daggers and Bardins dual hammers - the delay is very prominent and makes it unplayable.

@Saryk - Had a question, since i was facing the same issue. Are you using the SteelSeries rival 3 wireless mouse by any chance ?

I don’t think it’s anything to do with mice (mouses?) Rather huge host frame rate drops since last patch. I’ve had things ragdoll dead in front of me and suck up a hit, usually stable ping on top end hosts machine have rubberbanding, rats walking in the air and maulers hitting the ground six feet away somehow clocking me on the head. I even had some fella with his arm missing keep running around trying to hit me with blood squirting out of the stump. I don’t know what they added to 4.1 patch but its overloading CPUs and causing horrid input lag and frame rate problems.

I do not think this is a bug for i have seen them from time to time…i have absolutely no idea how trigger their appearance though. Intentionally hitting the arms didnt work for me.

I have been lagging more since the last few patches though.

Arms can get cut when you crit enemies, even if it doesn’t kill them.

It was a mouse issue for me. I changed it and now there is no input lag

Yes, a thousand thanks for this video. That’s exactly my issue, and it is quite inconsistent. It’s obvious on flails and bretsword and tuskgor spear, but it’s hell on all heavies really, because the attack sometimes loads all the way before releasing.

I haven’t been able to mitigate it with the input buffer above 0.5 though.
Edit : switching it to 0.5 or above prevents it from getting stuck in the “button held down” state, but there sometimes still is a slight delay between the release and the attack.
To be completely fair also, I don’t think I fully understand what the input buffer and the priority buffer actually do.

This could be a good explanation for the problem, though I don’t recall encountering those. I do have a top-tier computer and I was hosting.
I am able to replicate it in the keep, alone, with no game started.

@Saryk - Had a question, since i was facing the same issue. Are you using the SteelSeries rival 3 wireless mouse by any chance ?

No, and it is defninitely not a mouse issue. No problem with mine on any other game - though I wouldn’t recommend a wireless mouse for gaming.

Definitely not a mouse issue, has something to do with specific weapons. New cog hammer has this delay as well.

Same with Rapier in middle of the battle. I play mainly weaves atm. It is pretty random.

Not specific weapons, all of them. It simply is less noticeable on some, and absolutely flagrant on others.

Does anyone have any idea how to fix or at least mitigate this ? Could it be mod-related ?

With 0.2 input buffer :
I can replicate with 100% consistency on both Victor and Sienna’s flail, Kruber’s bretsword, and Kerillian’s glaive by releasing the heavy attack during its initial wind-up animation.
It is inconsistent on Kruber’s 1h sword, Bardin’s 2h hammer, Kerillian’s daggers, Sienna’s fire sword, or Kruber’s spear : sometimes it works fine and sometimes there is a delay (up to 1 second) between LMB release and the attack.
Some weapons don’t seem to be affected : Saltz’s 1h axe, Axe and Falchion, Sienna’s mace, Kerillian’s spear and shield.

At times, there also appear to be some “dead input” frames after the animation for a heavy attack that make chaining attacks impossible when the bug happens : for example L1 doesn’t register during/after Tuskgor spear’s H2 animation ; or Bardin’s 2h hammer H1 > H2 chaining is horrendous (I expect him to bring the hammer from the left side to start H2 but instead it appears in default position, sometimes with a show-off spin which adds insult to -literal- injury).

With 1.0 input buffer :
The attacks don’t get ‘stuck’ in the wind-up as if I held LMB down, but there is a significant delay (up to 1 second) between the release of LMB and the attack actually going.

I want to play the game

In 4.1 they introduced some telemetry to figure out what is responsible for the high ping after the OE-patch. I suspect it’s the telemetry-process causing heavier load on CPUs.

Here are some videos I captured. I think they are the more telling ones.
Flail : notice how holding down LMB longer doesn’t result in the permanent spin, but releasing it during the initial windup does. Same exact behaviour on Bretsword by the way. 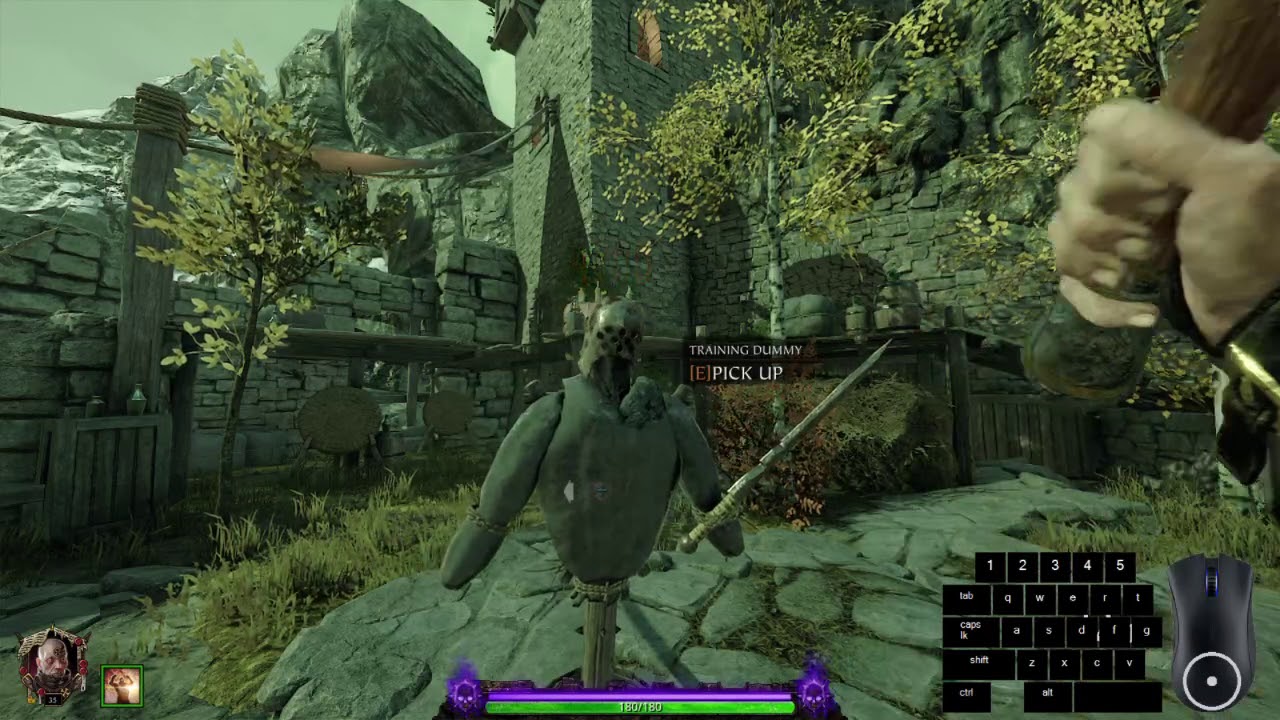 Here are the inconsistent ones :
Fire sword expectations : notice how the attack goes as soon as I release LMB : 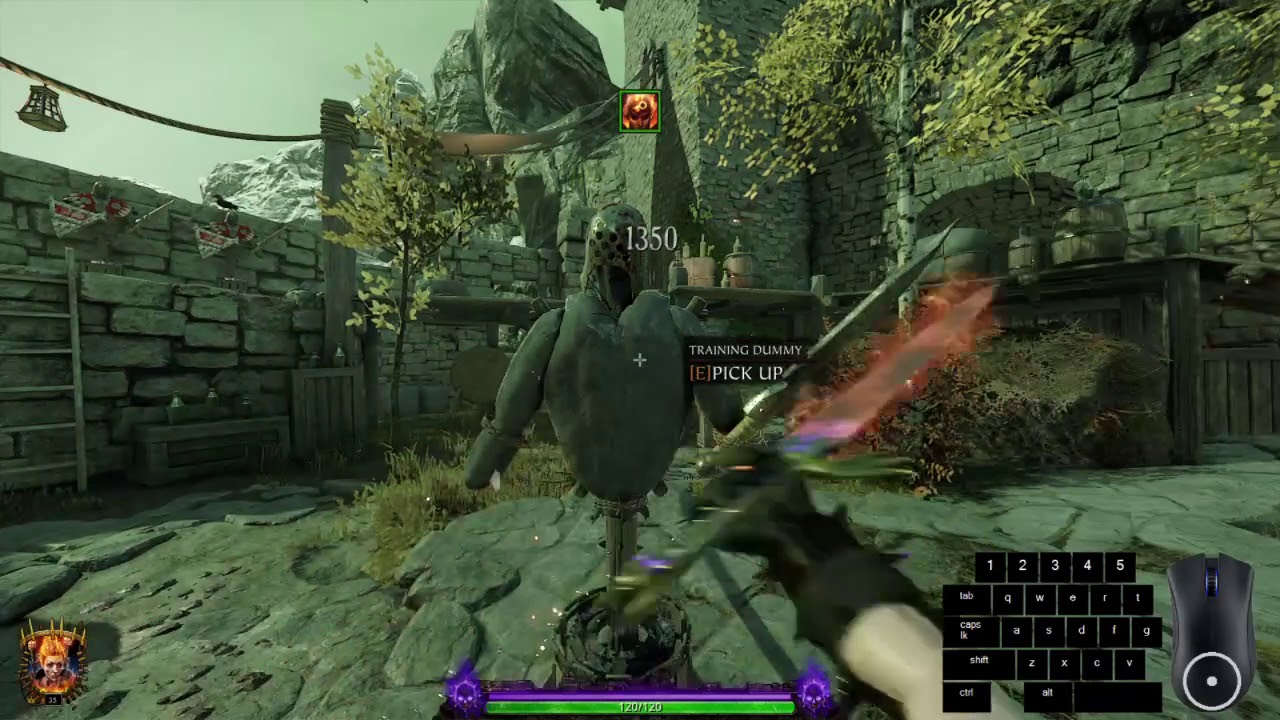 And here is a demonstration of it being inconsistent. Sometimes it’s instant, often it’s delayed : 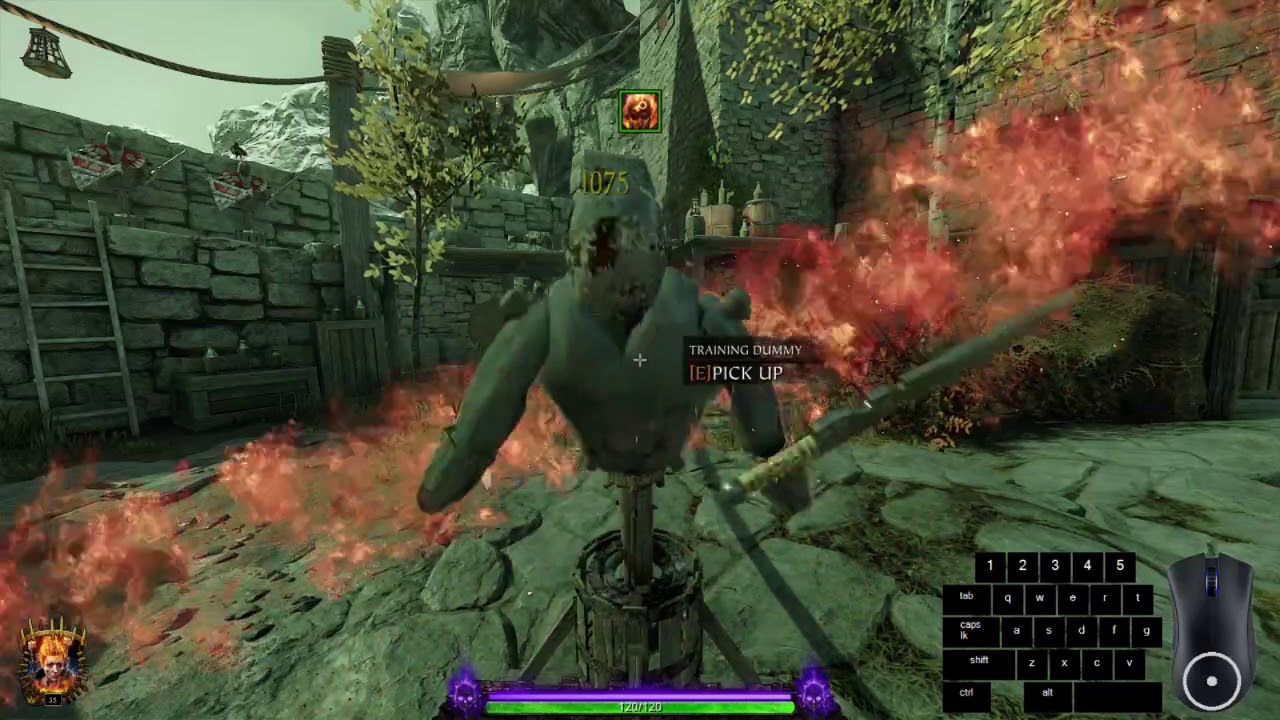 And finally I think the most telling one regarding chaining attacks : the spear. I’m genuinely trying to chain L1 > H2 > L1 during the whole clip. 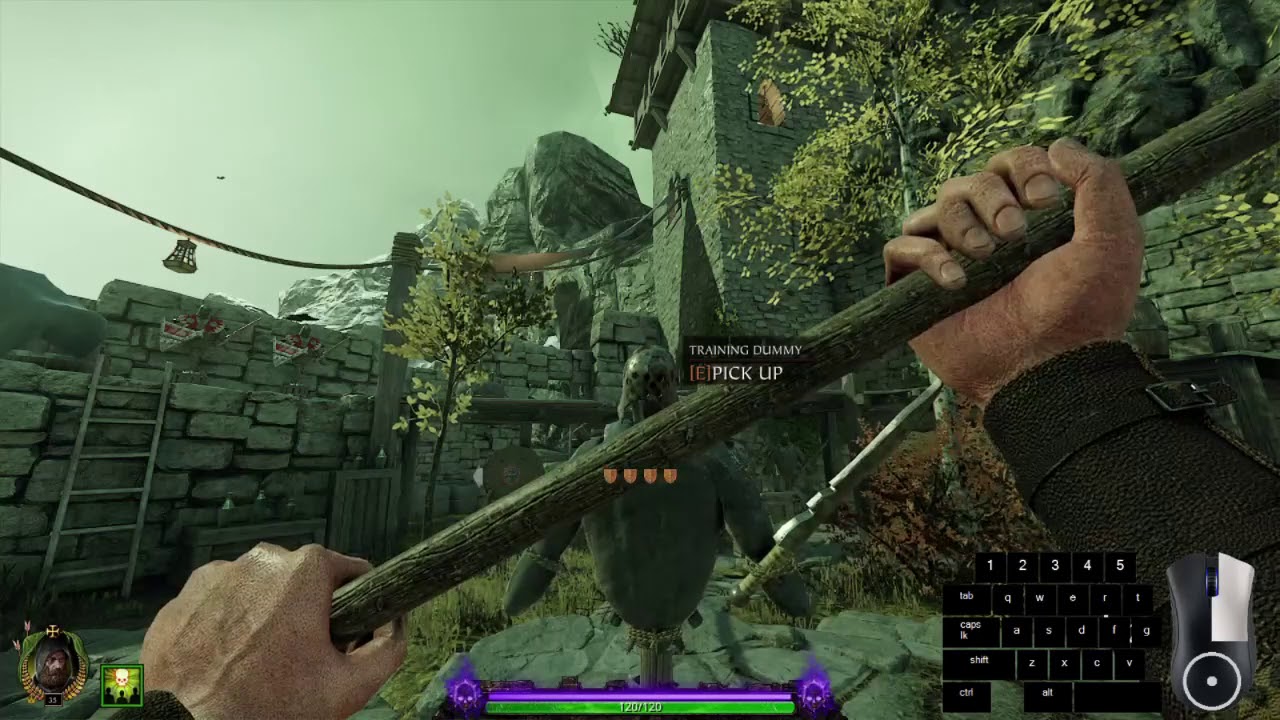 Would logs actually help here by the way ?