sorry for the translation: these days i saw an image of an idea of ​​a new career of victor alchemist with skaven studies, and i found it interesting and thought of some ideas if this career existed… would bardin help victor to develop these items? 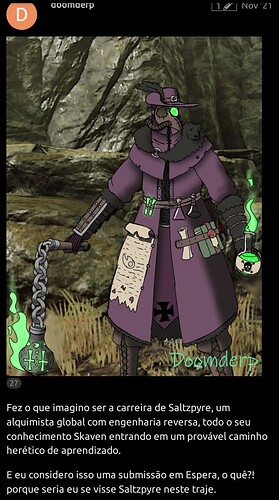 Passive
Potions: Victor cannot carry bombs, but he gains potions in his inventory.

Poisoned Wind Globe: Every 60 seconds a gas bomb appears in the bomb inventory. Stacks up to 3 times. (Gas bomb deals AoE damage based on enemy max health every 1 second for 10 seconds)

#####Holy and Flammable: Every 80 seconds a Flammable Glass appears in the Bomb Inventory. Throws a flammable glass onto the floor that spills out that ignites when hit by Victor’s (spark) attack.
(Stacks: 2 times)
(Flammable Liquid: Lasts 15 seconds on the ground)
(Fire Lasts 12 seconds)
(Visual Effect: Yellow fire with blue flare)

career skill
Parallel Studies: Victor releases gas around him, slowly expending his skill, the skill slowly regenerates. (By pressing the career skill button the gas is released, by pressing the button again the gas stops and also stops consuming the skill bar and it recharges again)
(Total skill duration: 15 seconds)
(Total skill range: 1:30)
(Smoke lasts for 1.30 seconds after skill ends)
(The skill can only be activated again after 6 seconds after using it)

The commands to mix potions would be: click on the bomb and choose the potion you want to use, then press the aim button to leave it in your left hand and then choose another potion. It will mix and the mixed potions can be stored in the health and potion inventory.

POISONED SHOT PISTOL: A pistol with 10 projectiles, with only one shot at a time. (The projectile does 30 damage and 170 damage over 10 seconds) (poison damage is stackable) (Special: Pistol swing) (only WH and AW can use)

Poison+flammable:
Damage over time all at once at the time of the explosion

cool idea and concept, tho i think it needs streamlining
compared to all the other careers this class is too complex,
another problem i see with his gas aura ability even tho i like the concept i dread the implication, why?
visibility, a mage with coruscation staff is already a nightmare to play along.

next are the dmg values, you went with percentages
whats the problem with % you ask?
they scale with enemy stats, the less health an enemy has the worse it gets wich makes no sense a weaker enemy should die faster from the same effect not equally fast

you mention 16.5s total career skill duration and 2% total max hp dmg per second, that would mean that this skill would deal 33% dmg in 16.5s duration to slave rats, (cata) that’s awfully bad
i feel like a aoe gas attack should be best at dealing with trash the best. and then scales worse and worse against stronger enemies, but this concept has this reversed (maybe on purpose?)

Very cool idea which certainly breaks from the Sigmarite theme to the character and takes him in a new possible direction.

I like it alot as it would broaden Victor from mentioned Sigmarite theme and perhaps also open the possibility to other “applied science” careers for him in the future.

EDITED: The details can be discussed and modified and such, but its perhaps the best idea I’ve seen for Victor in a fan suggestion so far.

EDITED II: One could easily see how this career could do to potions what the Outcast Engineer does to bombs and range weapons.

Cool idea, but I wonder if an Alchemist wouldn’t be practicing witchcraft according to Witch Hunters.

Also, I don’t know of any existing Warhammer careers that fit this. Every career the characters have in Vermintide 2 are so embedded in the lore you could find many miniature figurines with the same career (well Zealot is basically a Flagellant). I can’t really find any imperial battlefield alchemist types or anything close.