please put a class in here that gives more aura’s to attack,defensive,healing or healing abilities which all explained below on how they work and balance.

-aura lowers the armor penetration requires on certain units or causes shields to break easier kind of like a strength potion but this aura as a time limit like 8sec when activated.

-warrior priest target ally or self, give an limited holy shield that last for 20sec that gives your target a absorption shield that procs ever 1sec giving your ally/self 3 shielding ever sec up to 60 over the duration.

With how useless auras overall is, its gonna be just bad

Such effects could impact the performance of the game when you can already play characters that give temp hp + heal share with boon can give back a decent amount of health to the whole party.

This is not rpg after all

Well, the elf can already heal the party to 50% and you can make a really good heal share build with her on live. Problem is, most people don’t care and will just drink every healing potion they see anyway.

And what’s this heresy about a warrior priest when we all know my vampire chick is coming first.

I heard new hero? If I have to choose a healer for the group I stay with a Jade wizard, would be fun catch rats with roots.

These posts always have something in common, our desire to have new heroes on the team.

How about an item that creats an aura. Lets say you could pick up a lantern that heals everybody inside the light over time but you cant attack and it turns off after some time or once you drop it. Maybe make a yellow for strength, purple for ult. and a Green Lantern for health obv.
Just imagine having all three lanterns boosting one slayer. Infinity Dwarf

I’d lie if I said that I wouldn’t like to see a warrior priest character in the game. But that raises a couple of questions:

Ranger Bardin with chance not to use heal on neck, pot share on Charm and pot drops on Special kill. Also use 20% of heals on self are shared if you have Merc/WHC(temp health talent).

I’d love to see Saltzpyre get a Warrior Priest career. Could be a proper tanky class, with a big hammer he wields in one hand, and an armored book that functions similarly to a shield in the other (as a unique weapon).

I don’t think it’d be that weird for Saltz to become a Warrior Priest - his friend Father Kraussman went from Witch Hunter to Priest (the one who had the Blightreaper hidden in Bogenhafen). Given that all careers are supposed to “alternate paths” since Ubersreik, it seems just as plausible that he left the Order and became a Warrior Priest as any of his other options - maybe he felt that a more direct combat role was necessary, rather than being an investigative Witch Hunter.

I feel like he could be a supportive-type hero, perhaps his ult could bless allies and increase their attack speed or damage? Would be cool to see holy fire engulf everyone’s weapons for some proper smitin’.

And regards to a whole new character: Skink, hell yeah. I love my lizardbois and they get no love in games outside of Total Warhammer. Though, hearing that we’re getting Genevieve or ANY new hero would fill me with incredible joy. @SmokerT69, I imagine you’ve read the Genevieve books? Did you have a fave?

EDIT: I meant any new hero would make me happy, haha, I accidentally implied the opposite.

Sometimes I imagine how incredible would be to have a Warrior Priest, a Lizardmen and Genevieve.

They were the most voted heroes in the survey I did:

Vote for our next hero! Vermintide 2 - Feedback

poll This doesn´t mean that we will have one new hero soon, but we can debate and see what the community wants the most

Imagine a presentation trailer like this one but with those 3 heroes in a new expansion after WOM, it would be … <3 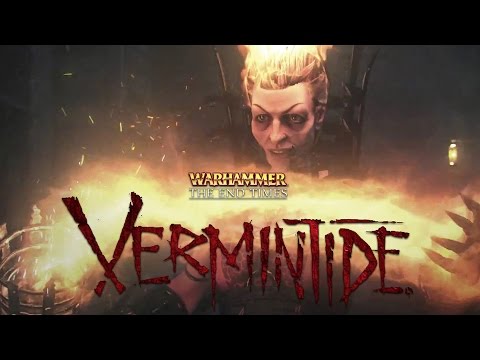 Although I will continue asking for my Jade Wizard to play healer.

I’d be floored if they introduced multiple characters at once. XD My thought is that they’d surely have to do one at a time. I’d also be really shocked if they didn’t put a Bretonnian in, though.

The game does already have some healing/support mechanics. Merc really is support oriented and is basically a party healer/rezer. Then there are a few talents like waystalker passive that can spread to the whole party. And not to mention heal share which really puts someone into the party medic role.

It’s really neat when a class gets to share something with their allies. For instance I love seeing paced strikes spread to me when clearing a horde, cutting through them just a little faster with a merc. Working on buffing or adding alternate talents to existing classes could really help push that further. And its a fine line to design for, since you don’t want to make a class too passive in their effects, that their auras are where all their power really lies, something you don’t really interact with and ends up being kind of boring.

Thinking it over having a new class/character that has a career skill that targets allies would be very neat. And have it function as targeting self if no one is selected so its not useless if they are clutching. That would really add more coordination to teams and an interesting array of effects that could compliment other builds.

Vermintide is an interesting design space for this kind of class, the traditional healer that stands in the back shooting light beams at people to heal them up doesn’t work here. And having a class that just heals on a cooldown conflicts with healing pickups . First thing that comes to mind is a class that can sacrifice its own health or give them self a wound to heal a teammate if supplies are low or they are about to go down/have gone down.

But it would be interesting to see where they could go with new classes, a more supportive type definitely is an archetype that could be done.