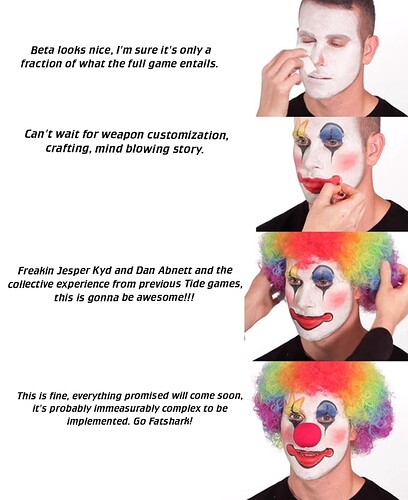 The scam is really that during the paid early access beta, they kept telling us: “we have surprises in store for you at launch!”

They made sure people who believed them missed their refund window. The “surprise” was that they added the cash shop and 2 maps that look exactly like every other map in the game.

They can shove my 40€ up their arse and choke on it. Fool me once, you’re not getting a dime from me again even if you put Emperor himself in the game.

They could have dripped out some more content that’s been withheld. I’m sure there’s another enclavum mission in the wings covered in trash to make the one good looking map look bad too.

But seriously where’s psyker’s zweihander from the trailer.

i dont know what to tell you

if you dont know witch game to buy to not be disapooited then maybe dont buy games in preorder, early acces or in first three mounths when they come out. is this your first time?

its a steam refund policy for unconditional refunds thats it.
almost all countries with consumer protection laws protect consumers against false advertisement and at least give you the right to demand for a refund.
and it does not matter what steam or fatshark or anyone think, what you can refund or not.

i bet if you make a proper case at steam support by opening a ticket and giving them the full list
of false promises/broken deadlines etc. they would give you a refund the same day. why? because its your right, and denying someone their commercial rights can get expensive really quick really fast.

Blame the consumer and not the company that lied?

If you look at the reviews, they were mostly positive during the early access paid scam-beta because FS kept lying and titillating the player base that they have “more content” for the release. What they were really doing is obfuscating their unfinished product so people would miss their refund window. This is a scummy thing to do.

Hedge has also gaslight this community with his disrespectful replies and leaks have shown that there is a MASSIVE amount of cosmetics waiting to be released into the cash shop.

Right now, I expect that Darktide will reach feature parity with Vermintide 2 (as it was at launch) by the end of 2023.

If you persist, they will refund you. I’ve had it work with other games in the past well after the “2h” mark. If you’re within the EU, they will eventually bow to the mighty consumer protection that every country within the Union has to provide. Valve won’t risk dangerous precedent from a court ruling that a certain item has to be refunded. If anything, Valve will put pressure on developers and publishers if too many people step forward. Devs pulling a game of Steam because Valve told them to has happened in the past.

So because FatShark lied and used deceptive business practices, all players should now go through an impossibly complex process that may or may not work to get money back?

Come on… you can’t possibly be this dense, right?

aparently its “impossibly complex” to click "open ticket and write what amounts to an letter worth of text.

talk about checkmating yourself

It’s the old victim blaming tactics. I agree, people should not pre-order. But blaming the consumer when the person selling the goods BLATANTLY LIED to them is just wrong, no matter if pre-ordering was a “smart thing to do”.

Like one of the clowns reviews on Steam “Combat is great, rest will come”

“Car is fine, interior will come!”

“Burger Paddy was great, rest ingredients of burger will come!”

“House is great, walls will come!”

I dont blame you. get refund.

too late? well you can blame FS for that. they made you play more than 2 hours. how dare they.

yeah i really don’t get how this is even debatable,

the finest dinner you can ever imagine, i doubt you’d enjoy it if it was served in the sewers.
like come on fatshark can’t be that hard to come up with a serveable hub, its laughable

The scam is really that during the paid early access beta, they kept telling us: “we have surprises in store for you at launch!”

Still a bit miffed about this tbh. This was the last time I ever listen to Fatshark say “wait and see, teehee xD”. I didn’t really expect anything beyond more modifiers or maybe a new hub system but damn, we got almost nothing.

probably something broke last minute they had to pull back lol