I found Cinder Peak to be the worst offending area in terms of framerate. I consistantly maintain 60 FPS in the base game content and manage to get between 40-60 in other areas of Chaos Wastes.

Character/Career Saltzpyre Witch Hunter. (Hero and Career have no baring on this section) 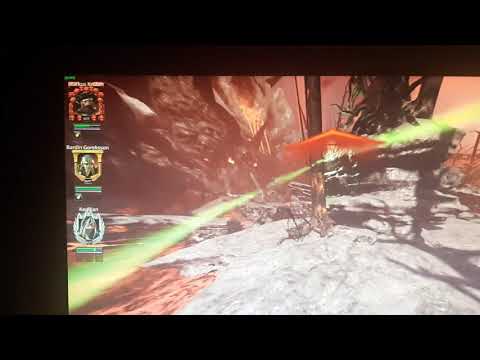 I’ve played several hours of CW now, but otherwise haven’t played V2 for months. It seems like, on CW levels, I get sporadic FPS dips that last anywhere from 0.5-3s. During them, my FPS gets really bad. I tried playing a few normal levels and didn’t experience out of the ordinary performance problems. My system is very old so I don’t get great performance even in the best case.

What sort of FPS are you achieving?
Outside of CW levels, I get 60 FPS with nothing going on and maybe down to 45ish with lots of things happening. When playing CW levels, usually performance is the same, except for those sporadic FPS drops that can go down to actual zero. Like, Steam’s FPS counter actually hits 1 FPS and I see no new frames being drawn for a second or more. It’s more common that it’s more like down to 15-30 FPS for those 0.5-3s where I have problems.

The longer, bigger FPS drops certainly do happen in combat, but the problem seems to be able to happen at any point in a level for me, even at the beginning.

Have you made sure your mods are disabled? This is important!
I tried a run with all mods disabled and still experienced the same issues.

Was Sienna played? Which career?
Yes, I was playing Sienna. Experienced the problem as both BW and unchained, but what I was doing at the time didn’t seem to be important. They would happen with me just walking and not attacking or having attacked recently.

Was there lit lamp oil involved?
No.

Which locations do you notice this the most in? Screenshots of the worst offending areas appreciated!
I don’t see any pattern. It doesn’t seem to happen in the same location every time.

Did your FPS drop after using power-ups, or right from the start?
I’ve definitely had my frame rate crater at the beginning of the first level we played, before we saw any enemies or found any shrines. It might happen less often the earlier it is in a run, but I’m not sure.

Once I know more, I’ll let you know.

I was experiencing pretty serious but seemingly random FPS drops, where my performance would drop down to less than 10 FPS (I usually get 50-75 frames with occasional lower dips).

On a whim I disabled G-Sync (I have a g-sync enabled laptop) and I haven’t seen a single slow down. In fact, the performance overall seems a lot more stable and faster.

Not sure if that helps but maybe is a clue to what is going on?

Average fps: 150 fps
No mods
Windows 10, always updated
Saltzpyre
Mostly in between lvls in Chaos Wastes. Where youre supposed to pick the next location. Often the ping goes up to 400 and stay there for a couple of minutes

Should we still post something here?
Core-i5 6500, GTX 970.
Had substantial fps drops everytime I used the coruscating staff, especially when casting multiplie times or hitting multiple enemies.
The same when getting stacks of nurgle’s curse. The problems accumulated, including eventually severe rubberbanding and random sounds missing, until I was completely unable to play - curiously, the CPU was strained, not the GPU. I force-quit and rejoined, whereupon the original problem was still there, but not as bad. One assumes it would get worse over time.

Many players have seen substantial improvements with the release of patch 4.4 but I appreciate some are still having problems. I’m closing this and creating a new post shortly, as a lot changed with 4.4 and I think it’s important to keep pre-4.4 and post-4.4 performance issues separated!