I thought this was fixed but i’ve run into it a lot today, basically I was doing a bunch of solo legend runs and had to hold choke points when suddenly the wave would surge and like, 1000 hits would go though my block, instadown and then instakill me, and almost crash the game from the sheer number of hits I received in like .1 second as the entire wave clipped through itself. This happened about 4 times today, another issue with that kind of clip clumping is that weapons won’t properly cleave / stagger when all of the enemies are inside on another.

I literally just made a post about this on steam:
I tried not to rant but I might have let loose a little. These are my thoughts on why the ranged meta is so prevalent, or rather, what I think people are missing about why it’s so prevalent.

I join my first game in a long time only to be oneshotted by 10 enemies all clipping into each other standing in the exact same spot. Has FS ever actually addressed why they haven’t fixed this? This sort of thing is both immersion breaking and game breaking. I was all hyped up and ready to go for the G-nacht event but after that I think I’ll pass until something else comes around. I’m just sort of disappointed that in a game where being close to enemies is such a normal occurance that the clipping hasn’t been at least mentioned by them, and if it has been I’d love you to link it, I want to take a look.

I mean no wonder the meta has been ranged, who would want to deal with the extremely janky melee combat this game (and its predecessor) has had for so long ? The ranged combat may be more boring but it at least functions for the most part. I literally can’t remember anytihng questionable happening when using ranged other than weird “neckshots” that counted as headshots, but honestly the neck is pretty important when it comes to a weak spot so I say, fine.

Meanwhile in melee land 10 nurgle slaves form a “non collision party” and start flailing around. The best thing you can do in this situation (keep in mind, not the ONLY thing to do, but usually the best) is retreat, which makes it so frustrating. Trying to attack isn’t going to work because you’ll never get enough damage in before you lose unnecessary amounts of health. You just can’t cleave through that many bodies. Same with pushing, you won’t have enough stagger damage to push all of them. Dodging doesn’t work because there are just too many attacks coming in, on higher difficulties it’s not worth the risk. No what you might as well do here is whip out a blunderbuss or ranged weapon and blow all of them away, which is what most people have been doing.

IMO the collision bug is worse than how enemies have constantly spawned in directly next to players (before the ambush sound cue) because at least I can figure that I can avoid damage by paying attention to the spawn points like holes in the ground. The collision bug is a lot like the problem of skating enemies which looks like it’s being worked on, yay. Why? Because both of these required the player to deal with unreasonably stupid / unrealistic situations. Berserkers flying across a span of 4 meters to hit you, or literally any enemy turning around as they spawn in, sometimes hitting you before their animation even goes off. 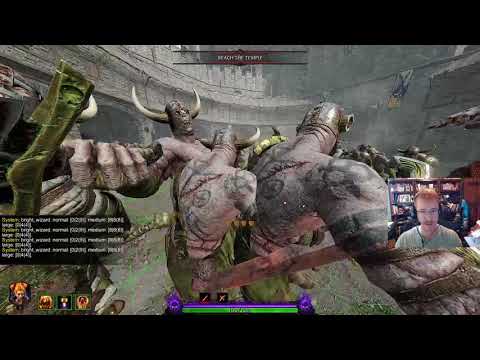 Never changed up to to day I think put the video on higher speed or klick around (I got bored).

How to get hyper density

Knowing how hordes move helped me a lot in fighting them (especially in solo). Sticking to a wall will prevent you from being rushed and constantly cycling or moving in one direction will also prevent it (as long as you let them move to you do not jump into an blob you might have created).

The problem is, that as soon as you move, and theres any terrain the slot system becames nonexistent… And since mobs spawn in each other (ambients also) they wont take up their slots at all, just starting to hit the player… Same situation when kiting away, all the mobs will meet in the node in front of you with their running attacks. The system would be more acceptable is it actually worked at least most of the time. But even when you stand still (as you see in the vid, when the waiting pools change mobs and they remain in front of you) its flawed. Also since its so bad at a basic level i dont think fs will do anything about it.

Did FS ever give a reason for the node system? I’m genuinely curious why they would use a system like that as it seems like a band-aid that was applied to a problem they saw but was never replaced for something like a real bandage lol. I assume they wanted to make sure the enemies couldn’t swarm the player, but if there was collision in the game this wouldn’t be able to happen anyways. Like, real collision. I mean if there are a bunch of enemies surrounding the player, the node system wouldn’t be necessary if the damn enemies wouldn’t clip into each other, cause there just would be no way the other enemies in the back could push their way up.

The notion of a slot system is sound but it’s not working properly. The idea of it is pretty much what you described after stating your question. There is supposed to be a limit to the number of concurrent attacks you can experience, which is also dependent on what kind of enemies are attacking you. In my opinion game would’ve been super easy if it worked, but on the other hand it’s causing major issues in certain situations because it doesn’t work.

Did FS ever give a reason for the node system?

I don’t remember where exactly, probably somewhere related to j_sat’s Verminscience videos, but they’ve said the primary reason for the slot system is to ensure enemies spread out properly, not prevention of hyperdensity or multiple attacks. That means it works as intended, but it could possibly be tweaked (and has been, slightly) to avoid incredibly dense hordes of enemies. Besides that, the system itself can be manipulated somewhat, especially if you know well how it works, so that you avoid the worst causes of hyperdensity. Watch j_sat’s videos on it, they’re interesting info.