Champ runs and your experience with it

well, yesterday I tried to get some champ runs with a mate and it Kind of really hurts sometimes.
Dont know if u have the same attitude like me, because ingame I really enjoy it sometimes being smashed all around the map.

yeah, so lets start my storie, maybe some of u want to share their experiences in a same way.

first Mission was festering grounds, yeah easy one, everyone played it to death on beta, so lets just go through, or not?
first Encounter at the Little lake with the waterfalls, right in the beginning:
6 chaos warriors (ok ist champ)
handling em spawned a chaos pat (happens), a storm vermin pat(sh*t happens), 2 stormcaller(ok thats rly bad now) and some minor Specials i couldnt even Count all before elf sniped em, everything went really fast.
2/4 Team down, kruber charges, rescues 1, sienna dead, Horde spawns.
3/4 down, kruber got overwhelmed after saving elf, storm vermins dead, chaos pat should be too, 1 sorccerer found and killed (thx elf for ur lucky “f”)
so ist been dwarf against 2-3 ramaining chaos warriors, stormcaller and whats left of the Horde…easy one.

kite em through till i see my mates (room before Bridge) getting elf up buying time for it with my ability.
next spawn wave incoming: 2 rattlings, at least 2 hookrats, warp fire (dont know how many) and a bile troll, not to mention like always: a Horde! elf manages to get kruber and sienna free while I pushblock everyone, and the Story goes on. hookrat grabs me, elf saves, other hook rat grabs elf, sienna saves but dies due to rattlings, kruber gets her up just for the bile troll to vomit on both. elf and me Abandon the Scene, trying to fall back and handle Horde +Specials+rest of 1st Encounter. this short but intense run was ended by a leech and a gutter runner…bad luck, happens, stand up, go on.

Mission starts, first 2 chaos i saw jumped em down no dmg taken everything fine. Feeling: yeah, now it works, this will be a good one…
but it shouldnt stay…
first loot crate, 2 heal pots, 1 bomb. NICE!
Group decides to take tomes but maybe only 1 grim, if any…fine by me. so Little dwarf goes on from first loot crate, the left way through the Canyon (yeah that one before the hut at the very beginning)
again 3 Chaos warriors with some Little scrap around em, dwarf jumps in mows 2 down and then hell broke loose, again storm vermin pat (no Sound) spawned with my mates, chaos pat spawns in front of me and somewhere must be a storm caller again, because right between that Little gap (me in front end of the canyon, Team at the crossing) appeared that stupid storm again. lets fetz, having ability ready again (cdr on weapon and trinkets) I jumped over the chaos pat and mow them down from behind…right into a flamethrower and a machinegun! yay! I guess they must have been as surprised as me, when a half naked drunken Dwarf flying through the air landed on their heads. just imagine it, you are a skaven with a warp fire or a machinegun, Standing there behind a chaos pat, and all of the sudden this little dwarf Comes flying(!!) towards you…what a Picture…
well, I dont know exactly what happend behind but somehow only elf stood when i checked on the others, so hacking and slashing both skaven down before they could start Shooting there were only some chaos, a spawning Horde and the storm vermin which didnt all go for the main Group between me and my mates, NO PROBLEM! “was there a Sound of a gutter runner?! did i hear a teleport of a leech?! or is that a hookrat again?!” the answer is as sad as simple: YES! jumping back to mates, sienna died right in my arms, kruber got up, elf got down both died and the three mentioned Specials coudlnt agree whos going to get me, so leech “puffs” out of shadow or so and right in that Moment hookrat grabs me, when the runner landed on a little drunken hald naked dwarf, end of the second run, even before we all reached that first Plattform…
wow, two times in a row going buttr*ped right at the beginning, was fun but it started to gnaw on me (played champ with salty the last 3 days of beta with nearly no Problems)

so lets go into the third match:
got IB again instead of Slayer, rest stayed (

for the 2 randoms at this Point)
“Festering ground”, again.

Going well until we reach the third tome and the swap, little less spawns than before, better Timing for us so far, got chaos spawn at the second tome place, nuked him. Group got half HP, sienna on last life with temp, no grims for we wanted to finish a champ run.

Bile troll spawns: ok ist champ, 2 bosses are fine
again an out of nothing stormvermin pat: they realy Need to fix spawns and Sound
Horde: like with every boss fight…

to shorten it up: we all ended dead again. Why u ask? Well, thats a really good question, I cant remember where the 6 chaos warriors came from, somehow with the Horde i guess, the 8 Specials (2 leecher, 3 stormcaller and 3rattlinggunner) have been not a huge Problem this time, but anyhow the Horde didnt stop spawning and overran us with the warriors…

I enjoyed those challenges always and if a run is finished early due to These numbers I never minded, but 3 in a row…first time since technical beta where i first played champ I really hate the vermintide (not the game)

tl:dr; sometimes u win a hard match, most times u lose even harder matches

dont get me wrong, I aint complaining

Champion runs are good to relax and have some laughs.

just like now…playing slayer again, quickplay, all randoms, against the grain…biggest boss are the wheat plants…dont see anything, horde with gunners and leechers…krub dead, rest can go on (thx 2 sienna and kerillian) chaos spawn right after we entered the stables, before we even can heal up, krub behind next wall…chaos spawn kills me, kills kerillian, got stuck on chewing on his not existent dead body, sienna kills him, turns around next corner, backstabber, end of run… sometimes just…

To many or to large hordes during boss fights on Champion.
And the amount of suddenly spawning Specials is over the top.
V1 had a better balance. Hope we’ll get the same here at some point.

You should try legend, it’s a lot more balanced.

Just 1 run for fun, you can post you’re experience after. Trust me you’ll appreciate champ a lot more.

Hero powers make it necessary imo. If the game is going for a similar difficulty curve to V1 then it needs more specials and hordes to compensate for the massive power boost characters get in V2 from talents and hero powers. 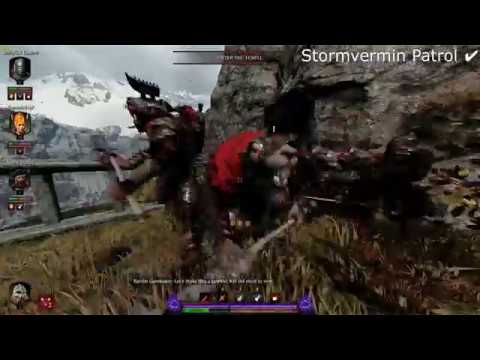 Looks like a classic case of getting rekt. LOL! Happens also with skaven specials.

this pretty much sums up the last couple of days of Quickplaying champion. Though, tbh, I’ve never actually had it THAT bad.

Fatshark please see this, and do something. I haven’t had a champion quickplay win in days because of stuff like this…

Honestly, I don’t know how to say this without sounding rude as hell, but I’ve had an easier time clearing Champ with bots than people the past few days. Being used to V1 bots (without QoLMod until maybe a week before the V2 tech test), that’s confusing.

Ill play champion only if I want to relax and chill mostly. After playing only Legend and conquering some hefty deeds, running champion with a buddy is guaranteed. We hold bombs for stupid patrols out of nowhere and we both have party-proxy on potions. If I am playing with my regular buddy we can duo champion without much challenge honestly. I barely play champion at all though, i am mostly stuck on playing legend - champion is legit too easy