Today we are super excited to share the new Chaos Wastes update with you. Be’lakor is live now across all platforms! This free update contains the new Be’lakor presence in the Chaos Wastes game mode along with fixes and tweaks. Together with this update, new Premium Cosmetics are available in Lohner’s Emporium of Wonders.

Below you will find more information about the new update. 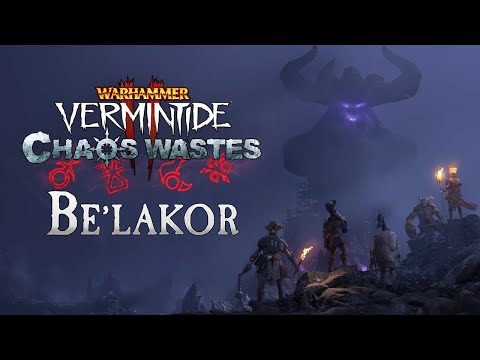 Be’lakor is a master of terror and illusion … the first mortal to rise to the exalted rank of Daemon Prince. Disowned by the very gods he once worshipped, he has spent millennia searching for the power to challenge them directly. With the balance in the Realm of Chaos upset by our Ubersreik five, he might just finally have found his opportunity …

Be’lakor will be a new presence in the Chaos Wastes. Players will come across levels influenced by Be’lakor while playing expeditions. Learn more here!

Check out the new Premium Cosmetics available now in Lohner’s Emporium of Wonders. Click here to view them!

Read the Patch Notes for the 4.7 to learn all of the details of today’s patch.

Be’lakor will be a new presence in the Chaos Wastes. Players will come across levels influenced by Be’lakor while playing expeditions.

Inside the temple players will be challenged to fight multiple Shadow Lieutenants. Destroying their loci will result in weakening Be’lakor’s influence, ultimately destroying his statue to sever his connection to the expedition.

Surviving the Temple of Shadows rewards players with veteran boons upon completion.

Fixed an issue where enemies could still spawn after the destructive finale within the Be’lakor arena.

This is still bugged. We had some specials and thrash mobs spawned after the finale. (2 out of 2 runs)

There was a fair bit of rejiggling stuff behind the scenes, moving categories, assigning new parent categories, clearing old archives (etc etc etc) and in the madness of that this was published to an invisible category.

Someone at Reddit /r/Vermintide has reported that the bugged challenges: “Tech, No Mage”, “Stout Heart, Steady Aim”, and “Peacemaker” have been fixed in Patch 4.7.1. If this is true, then this should also be in the announcement post.

I’d just like to report that there are definitely a few okri challenges that are busted and do not track whatsoever at the moment. Considering I’m new to the game, I do not know if this is the latest QoL patch that introduced this, but considering I bought everything I feel a little entitled to being able to complete and unlock cosmetics … Notably I’ve killed at least 50 special/elites with my Masterwork pistol on Outcast Engi and it does not update or increase the counter it just stays at 0/150…

Peacemaker challenge for the Outcast Engineer is bugged, it’s stuck at 113/150 and won’t go up no matter what. I disabled mods, tried different difficulties but nothing worked. Has anyone faced this issue before?

The challenge Tech, no mage is broken Vermintide 2 - Bugs

I’ve been trying to get this challenge done, and I’ve killed Burblespue Halescourge 3 times now with the cog hammer (final blow) both with power and light attacks, and I’m not getting the challenge. Again, I’m killing this boss with the Cog Hammer as the final blow and the game is still not giving me the reward for this challenge. Please fix it.

did halescourge with engi 3 times to get the achievement with “having a coghammer” … killing burble with it… landed the killing blow 3 times, one time i didnt even use ranged to make sure but no chatmessage, nothing. no achievement was engi had coghammer was legend [unknown]

Hello, I’m encountering an apparently known issue about this achievement : Tech, no Mage. This require me to have the final blow on Blight Stormer, Life Leech with the Cog Hammer and my issue is related to the last one : Halescourge. I tried to kill him on several difficulty levels and even when I got the last hit, i doesn’t receive any notification in chat telling that it’s complete. I tried severals things by myself : trying with an Cog Hammer I crafted, trying in every difficulty level …

I have killed multiple Leeches, Storm Sorcerers, and Burblesque a few times now, but the objective still will not mark off as completed. This is more of just a question as when this bug will be fixed. Thanks!