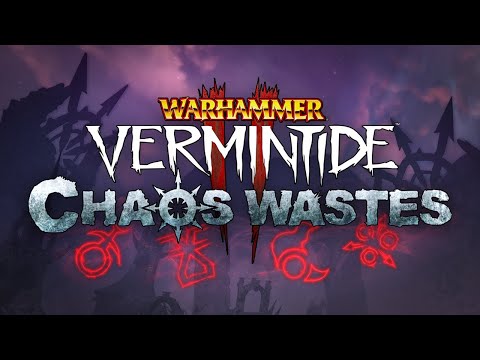 The latest update to Warhammer: Vermintide 2 is live right now! Jump into the Chaos Wastes together with your friends and prepare to head out on your first expedition!

Chaos Wastes is a free update for Warhammer: Vermintide 2. Explore the unpredictable and dramatic lands of Chaos Wastes in this all-new 1-4 player co-op rogue-lite experience, expanding the Vermintide story in a new game mode.

Explore the Chaos Wastes together with your fellow heroes in this new rogue-lite inspired game mode. Build your team from the ground up, decide your tactics together and prepare for the unexpected. The farther your team progresses, the greater the reward, but beware: failure to reach the expedition’s end may rob you of the fruits of your labor.

Head out on expeditions and explore 15 new unique locations. The journey will take you through a diverse landscape with icy expanses, mountain ranges, and treacherous valleys, all under the control of ruinous powers. Your mission is to locate the rumored Citadel of Eternity in the search for salvation - at any cost.

No two expeditions are the same. Thus, the choices you make are more important than ever and can tip the scales, from life to death. Choose carefully as you equip new weapons, boons, miracles, and more as you progress through the expeditions.

Throughout your journey, you may encounter areas that are cursed. When you enter a cursed area, the landscape itself is influenced by its current ruler which dramatically changes the way you need to play. So, prepare for an extra challenge as a cursed area also brings a more sinister threat.

The Forgotten Relics Pack is a weapon and cosmetic pack and contains the following items:

Get the Xbox One at Microsoft Store and compare products with the latest customer reviews and ratings. Download or ship for free. Free returns.

In Lohner’s Emporium of Wonders and the Xbox store you can now find the latest Premium Cosmetics available for purchase! There are five different sets available:

Any info on a PS4 release?

Are we going to get the Khorne frames for the Skulls for the Skull throne event? I heard you had finally brought it to xbox, but I really want the frames my buddy has on PC

Frend just logged in on xbox series x and got the new portrait skull taker. Its bugged for me. I try to reboot and login but dont work. you just need to login turning event to get it but its broken…

can u fix skull Taker portrait frame. Somany ppl cant get it.

Please Fatshark, I’m playing vermintide 1 and 2 for a long time by now.
Fix the server crash problem for Brazilians players. It’s so frustrating having my game crashing and play with high ping everytime. I’m a big fan.

I’m very happy bots are added to Chaos Wastes. I joined these forums to voice my displeasure at still not having bots for Winds of Magic quickplay while in online mode. I read the old patch notes on how it was added to PC a long time ago. That’s the only reason I bought Winds of Magic in the first place. I assumed you were going to add the bots for console players as well.

As you know many of us play your game because you added bots and we don’t have to deal with troll players when we want to play and our friends aren’t around. I am sick of the drama and horrible team members from online games, I’d take bots over random people every single time.

I can use bots in offline mode only.

Which is useless for the times I do feel like playing with a friend online, because my online data erases my offline data.

Why haven’t you allowed console players to have private games for WoM with bots like we get to do in regular and now Chaos Wastes?

Are you going to do this in the future?

I’m putting this here because PC players utterly dominate the feedback area of the forums where they complain about bots. Where we console players would love to have them in all modes.

To host private games on the Xbox click the right stick and select private game. This is almost mandatory in CW since people get massively butthurt over getting vote kicked and rejoin repeatedly until you block them for no reason.

I appreciate the response and I have always done that in regular and now CW.

PC receive an update long ago that allows bots in Weave Quickplay. We console players usually get the same features they get, but later.

I’m really happy to have bots in CW a free update. I’m not happy that we still don’t get BOTs in Weave Quickplays.

I believe PC received the BOTS for the Weave Quickplays way back in Season 2. That was a long time ago and we still don’t have them on console for content we have to pay for.

I wanted to know why FS hasn’t given console that feature and if they are going to do it in the future.

It’s my fault for purchasing WOM without first waiting to see if they had added it, I shouldn’t have assumed they would.

If I wanted to play a player only based squad game, there are many other choices. I like VT 2 because of the bots, far less hassle.

The XBOX review section of WOM is mostly angry people that BOTS cannot be used for a reason.