Where are the luminous night sights?

For a game set in a dark underhive the lack of night sights is rather perplexing.

Shooting in the dark accurately would be rather impossible without them, especially when black-outs are implemented.

Most guns have the dots in the model already, why not just make them glow abit?

The Metro games have this implemented rather good.

I think they should be default while there is no crafting, to satisfy people who want them, but after crafting is introduced they should be a sight option along with other sights and attachments. But For now I think just making the sights more visible is absolutely the right call.

I’ve noticed that the revolver has a luminous front post, so the shitty sights might be a deliberate design choice

I can’t see Imperium to just ignore the fact that it’s soldiers can’t hit a thing in basically any low-light conditions. Like luminous sights are mostly extremely cheap when it comes to emissive radioactive paint, espicially counting the fact that radioactive materials involved in practically any production in imperium most likely. And i really can’s see how imperium wouldn’t put them on every lasgun. And as for gameplay I feel like they’re basically necessery to make something like lucius able to compete with Kantrael

You aren’t that far from the truth: 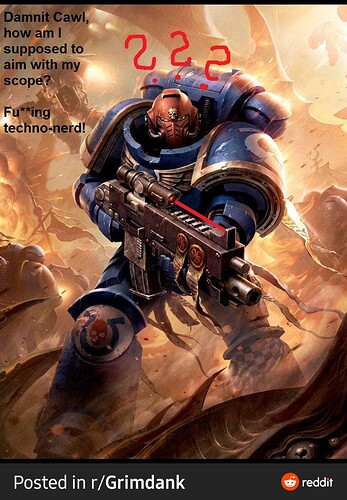 In the grim darkness of the far future, tritium night sights do not exist.

Also I just checked and boltgun actually has slots for luminous dots as well as braced autogun. But those slots are empty which makes them allmost pointles. And then there’s infantry autoguns and headhunter autoguns which dont have them at all but their sights are at least rather good on their own with needle post. But then there’s recon las and Lucius with absolultely horrid sight pictures where luminous dots would actually make considerable difference imo

A weapon attachment system would be really nice, if only to the tune of different sights/optics and flashlights/bayonets.