there’s a new(?) voiceline by Kruber about the Emperor Karl Franz liking his hats, and if it wasn’t for the fact he wanted so many hats, everyone could have flashy weapons.

Is this a comment by the Dev’s on the playerbase? If you weren’t so antsy about the hats we could make more weapons? The Artists can make hats or weapons but not both?

It did make me smile the first time I heard it. A little Low-Key dig at the way people are about cosmetics.

i keep hearing it many times but i always thought it was just lore based joke. The fact that the empire’s capital is poorer than boggenhaffen, is a fun fact knowing that karl franz is in gold armor with magical weaponry unpon a griffin. The part with Saltzpyre warning him about heresy is fun too! The voiceline is on the pit since the launch of dlc.

I am sure there are some cosmetics in the game that are not accounted for. After over 500+ Hours playing this game, I got a cosmetic helm for Kerillian WS that I have NEVER seen before. I got it out of a Bogenhafen weekly reward box. Actually I have never seen anyone else with it, period!

Actually as I was playing with it, a lot of people were asking me about it, mentioning they too have never seen this Kerillian WS helm before. And its pretty damn nice too

Its an orange rarity Helm that is NOT Horns of Kurnous. It has a wreath of leaves around the hood and it looks ABSOLUTELY FANTASTIC.

Is anyone else getting stuff that has never been seen or logged anywhere on the internet? I am typing this from work, I will post a pic when I get home. I think its called Herald of Kurnous or something

Its an orange rarity Helm that is NOT Horns of Kurnous. It has a wreath of leaves around the hood and it looks ABSOLUTELY FANTASTIC.

I’ve seen it xD It’s as you said, a new bög helmet. Every character class has 3 helms from commendation chests, 1 from bög plus the 100 clear hats and lvl up hats. There’s many more in the game files, but are locked away for future DLCs. You can see them on the modded relm.

You guys here have probably seen them XD, I don’t expect many PUBG players will have. The community here is much more invested and hardcore.

I wish someone would make some sort of compendium and create a gallery somewhere of all of the cosmetics in game, even the locked away ones.

But seriously FINALLY after how long I got something for my favorite career that is actually surprisingly nice.

If a compendium exists, where is it? An updated one I mean?

I wish someone would make some sort of compendium and create a gallery somewhere of all of the cosmetics in game, even the locked away ones. 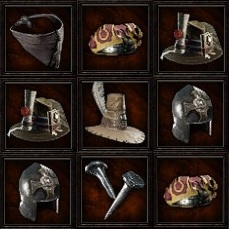 All hats and descriptions for every class...

Thanks a lot my bro! Fantastic

Yes this is the one I got in game, so if anyone is wondering what the Bogenhafen hat they gave us so far is that is officially available in game. Its an orange rarity.

Actually all these cosmetics are so rare, I dont know if them being itemized as green, blue or orange even matters!

They still need to make them change colour with our outfits…

more importantly they should change the color with the lore. The blackguard helm is supposed to be “Black obsidian” etc.

Yeah well it would be very thoughtful to include a range of colors for each hat, at least. Even 3 different colors available to wear, for example, when you obtain the style of hat. Its all about the style right?

I understand these color reskins of existing armors are all achievement based, but the hats come in only one color.

So we all have our favorite hats for careers but the hat doesn’t suit the color or skin we prefer. So without breaking the system, since theres only one color of a hat style, maybe a few choices of color hat would have been a thoughtful choice given to us by the Devs. No big deal.

I dont think they thought about the feature like agonizing fashionistas. LoL

See? Everyone’s obsessed with hats! Maybe if you didnt want so many hats we could have some new weapon skins!

LOL mostly agree indeed, most of us are really into the hats. Baha. I talk to alot of random people and majority just want more hats and more hats. I dont know why exactly

I think both hats and weapon skins are great. I just want more. But tbh there is less weapon design possible than skin/hat possible. Does not mean we are already out of option for weapon (far from it), but if you make a tree of possibilities you end up with like 1% of all weapon design already done (for the weapon in the game and staying lore friendly to warhammer) and like 0,01% skins. But In the end we just want more.

You heard the people. And we want more Hats.

No we dont! We could all have more flashy swords if Karl Franz (and others!) didn’t have so many poncy hats!

I need so badly a helmelt for my red armor…