My understanding is that the latest Quality of Life patch was supposed to address the problem that many players, myself included, have had with the inventory space in this game. Namely, the severe lack of it.

However, even after the patch it remains impossible for me to open spoils of war: 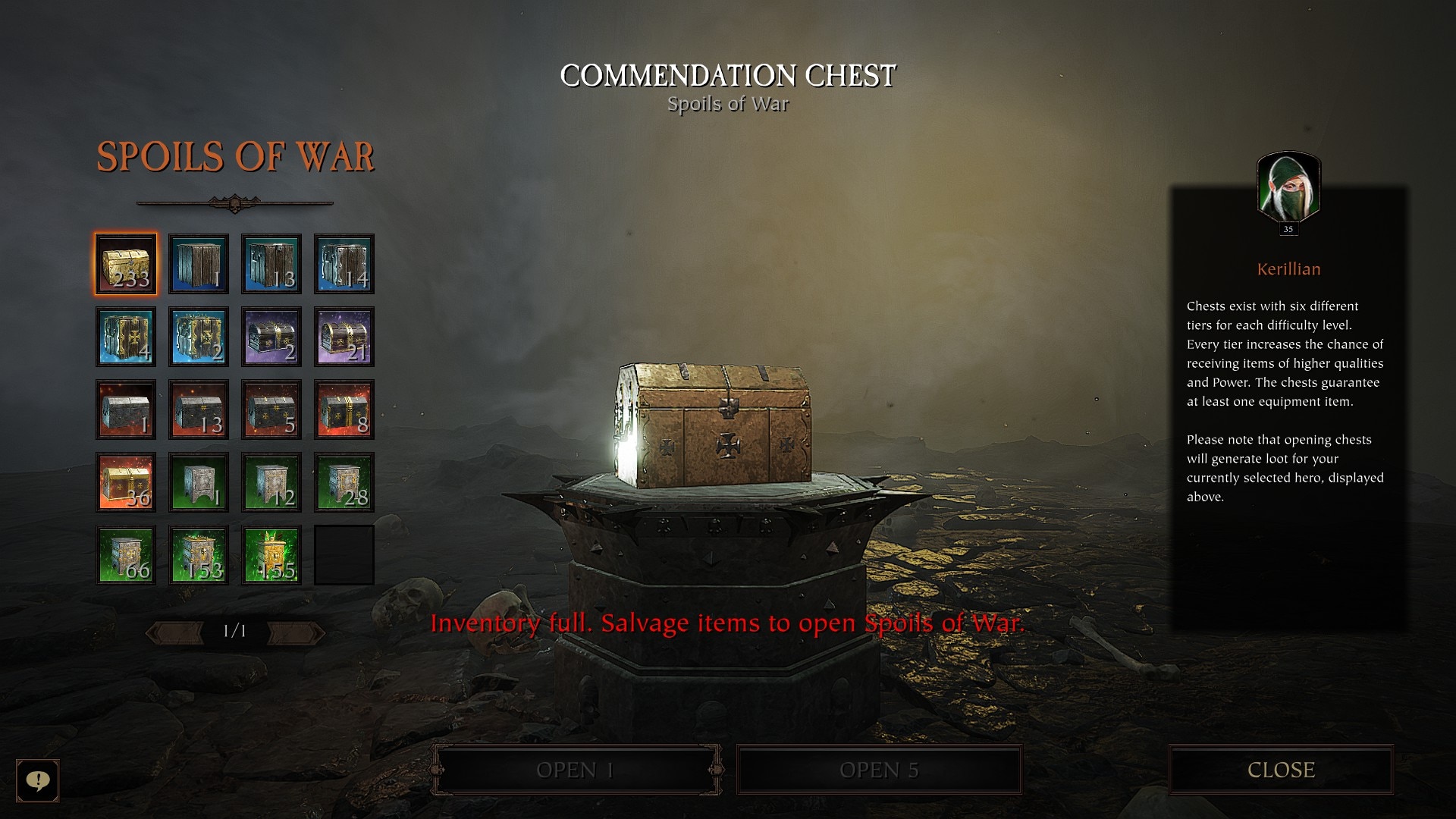 It would be most appreciated if we could get a developer response concerning the issue. Will inventory space be expanded in a future update, or will us with thousands of hours in this game essentially have to junk all our red items to make room for spoils of war?

This problem was addressed on patch 4.6.0, but it was not addressed in a way that I find useful. Now you can ditch your extra deeds to make room in your inventory. So you can make more room, I just don’t like the solution, because I don’t want to ditch my deeds, I just want more space.

So maybe you could reformulate your question, because this problem was indeed addressed, just not the way both of us wanted.

@Fatshark_Hedge’s napkin math in this thread pointed to a different solution that does not seem to have materialized yet. The ability to get rid of deeds does not help me in the slightest, because in my current situation that I screenshotted above, I already have zero deeds.

I said this in another thread, but you’re not even capped on items, which is the weird thing.

Continuously craft items and dismantle them for dust. It takes forever though.

You just can’t get reds anymore…

You just can’t get reds anymore…

Yeah I have the same problem.
They have a soft cap implemented to prevent larger issues. Anyway in this patch’s topic, Hedge (or Julia, I don’t remember) said the inventory fix didn’t make it in time, and they hope to ship it with the next patch. Let’s hope so.

I hope the Sharks will still make the storage of cosmetics not in a warehouse. Would it help to poke a shark more?

With an inventory of 1,000 items, 593 spaces are occupied by cosmetics, frames, and white blueprints. I don’t know for sure, but it seems like after filling the inventory up to 700 units, the chests cannot be opened.

Once upon a time, illusions also occupied a place (there are about 400 of them), which in the current realities would mean almost complete impossibility to have any item in the inventory, except for those listed above))

Unlimited inventory was in the first part of vermintide. In the second, there is a limitation and it will most likely not be increased due to difficulties.