Swift Slaying - A proposed change to its algorithm

Well, it is time for some forum abuse again.

If something in a game is problematic then you usually notice that it is talked a lot about. There are few things in this forum which are as much discussed as Swift Slaying … because it is problematic. To make it short:

The result is that the trait brutally overperforms. While it is okay on slower weapons, it becomes bonkers the faster the weapon already is, doubled if the weapon or character has crit chances of 20 % or higher. As such the trait currently benefits fast weapons in an absurd manner.

Note that this thread is less about discussing the trait itself and more about possible adjustments, so:

With this said let’s get the to the actual proposition. Honestly, the best way to balance this things over all weapons is to deattach it from the critting condition and give each weapon an own specific attack speed bonus and trigger chance. That is however a lot of work.

Luckily, there is an easy way to at least tackle the problem of Swift Slaying benefitting fast weapons to much while still keeping its effect intact for slow weapons.

Current attack speed modifier for Swift Slaying is 20 % (or 0.2 in decimal) and the new attack speed of a weapon is calculated by (with Current AS being after consideration of all other AS modifiers before hand):

This formula can rewritten slightly to

which yields the same results for an AS Cap of 0. However, we have now a new value to adjust Swift Slaying. After testing out a bit, it has shown that an AS cap of 0.3 is ideal. Why? Because it is still faster then the average of the fastest hitting vanilla weapon. And because it above the area where it breaks gameplay elements because you hit enemy faster than they can react, effectively rendering them useless. Anything lower then 0.3 will not work out, higher is not recommanded. Since I know that even simple math is kinda abstract, have a picture how this would work in total: 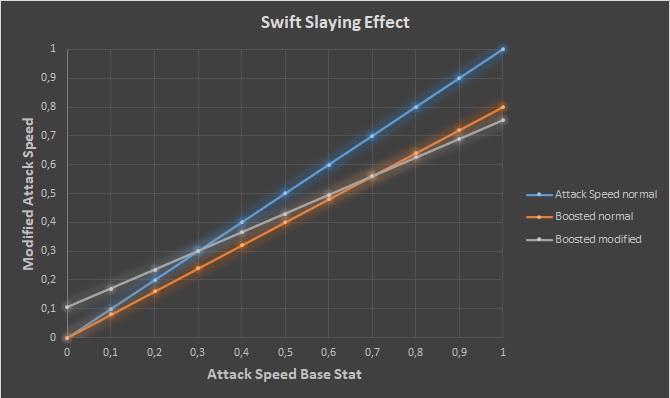 In summary it would solve the problem of benefitting fast weapons to much (which don’t need the Swift Slaying bonus anyway) while keeping its effect on the slow weapons with a potential plus.

Sidenote: Excel File is saved in the .jpg. You just have to download it and rename the file extension to .zip or similar. Scan before opening.

Seems like a roundabout way to buff 2H weapons with no justification for doing so. If you think SS is too powerful, a flat nerf to the % would be better imo.

Do the math again, check the values and then tell me again how many weapons exactly will be buffed by this. A flat % does not net the same result as it will punish slow weapons harder than fast ones.

How do you figure that? Becuase of less uptime?

And it’s a comparative buff. Not a literal buff

The more hits per second you have, the more likely it is that you get several attacks in before having to do a side action like blocking. If my 2H hammer has 20 % more attack speed but I have to block each second hit than I will not have 20 % more dps. For fast weapons the chance is higher to keep ongoing attacks.

Additionally, there is a cut-off in the downwards region. Good human reflexes are about 100-150 ms. Average ping is 50-100 ms. For the game to be fair. Attack animations have to be slower than that (unless they do no damage). As such it is a fair assumption that most enemy attack animations are at 300 ms or higher. This means that fast weapons have a higher chance to get below these values effectively cutting off the animation due to flinch, rendering enemies defenseless in the process and not able to attack.

Also more likely the higher the cleave. A fast weapon like DD has to block frequently because it has no cleave. That’s kinda the flaw in this whole idea of 2H weapons needing attack speed more than slower weapons. 2H weapons compensate w/ cleave/ control. Many 2H weapons almost never have to block like 2h hammer.

The more hits per second you have, the more likely it is that you get several attacks in before having to do a side action like blocking.

Also counting the number of attacks between blocking doesn’t sound like it’s adjusting for power of attacks or stagger strength of attacks or anything else really. I don’t see any sort of justification that Swift Slaying is better for fast weapons than it is slow weapons outside of uptime. With the restructuring of crit distribution, this is pretty much a non-factor as you should be able to hit 100% uptime or close to it with every build in the game as long as you have 15% crit.

Then let’s just disagree. If slower attacks don’t expose you to more danger than go the Executioner thread and explains this to the people there.

It is also rather unsurprising that most of the strongest weapons in the game are rather fast.

But yea, just let’s disagree. The proposal stands as it is.

After testing out a bit, it has shown that an AS cap of 0.3 is ideal.

Always wanted to know: What’s the current maximum AS at which the game doesn’t process any further attacks?

Hard to tell, it is a calculation example. To my knowledge there is no cap/limit to attack speed. So the lowest possible attack speed could be close above zero.

First look seems that Zealot has best chances to get the lowest value. Assuming he is using Rapier (which has an average attack speed of below 0.4 I think, but for the calculation I will use 0.4) we get:

This would equal seven attacks per second if you are clicking fast enough or if you use loatheworthy macros.

Hopefully their trend of helping slower Weapons be faster continues. If this algorithm can change that too, I’m behind it.

I think this current BBB tells us not to lose all hope when it comes to balance, and that if someone worked on a Trait Mod, they might consider implementing the changes.

So far FS have:

This really helps the slower Weapons, mostly those used by Bardin.

I still think something can be done to make Mining Pick a little less frustrating on IB/RV.

Why not freaking cap attack speed on some absolute value like 0.25s?

I think this current BBB tells us not to lose all hope when it comes to balance, and that if someone worked on a Trait Mod, they might consider implementing the changes.

I never questioned them stopping to balance. I question if their interests align with mine. I mean it may be nice that you can enhance slow weapons but

To give a relation current buffs would allow (ignoring weapon/character restriction) to swing a 2 H Hammer or Warpick as fast as Dual Daggers. You can’t tell me that this appears balanced. There should be some kind of dynamic correction.

Why not freaking cap attack speed on some absolute value like 0.25s?

It would be an idea but it only hard caps at the very lower end. The solution I seek is more dynamic and it shows effects far earlier than just right at the end. There is also a hidden agenda somewhere in there. Which is why I would prefer this solution with a dynamic cap.

Same as above, I simply prefer the dynamic solution. Biggest plus point is that is is one or two lines in the code which would need to be corrected. Handish solutions would need to look at the value for each weapon specifically.

What do you mean exactly by a dynamic cap? Assign each weapon the base and the maximum speed it can have? That’s not a clean solution. Cap attack speed buffs at 20% maybe?

That would probably be to harsh and you would never get it through the community.

Im interested what description Swift Slaying would get with OPs suggestion.

Anyway, I think a 5 or maybe 10 percent attack speed on Swift Slaying would be sufficient. Today it is too strong making me feel forced to use it even if i dont really want to.

Im interested what description Swift Slaying would get with OPs suggestion.

Hahaha, yea. That would be a problem. I would say increased attack speed in dependence of current attack speed for landing crits. For me this would be enough. But as this community is very number needy it would not fit the bill as they would like to have the percentage etc.

But as this community is very number needy it would not fit the bill as they would like to have the percentage etc.

So true. I think Fatshark would make themselves a great favour to introduce ranged number to things instead of absolute to add more randomness.
Weapons would have a min and max on most stats. I think it would make the game more unpredictable and even more fun.