Some speculation about the "Chaos Wastes" expansion

I’ve noticed that here are some lore references to Castle Wittgenstein and the village of Wittgendorf in the lore pieces given when the game is loading. And I think this is a hint about what is to come in regards to the next expansion, as well as my speculation for what else we might get with the expansion.

Just so you know where you saw it first.

Now for those who don’t already know Castle Wittgenstein is a location that’s part of the “Enemy Within” campaign to the table top Warhammer RPG, first version of it was written in like the 1980s or such and new versions have been released since then, and specifically the part called “Death on the Reik”.

Its a location where a noble brought a big chunk of warpstone (the green stuff that the Skaven uses in their technology and can be seen lying around in “Into the Nest”. Warpstone is essentially crystalized magic with many dangerous qualities) to his castle and put it down in the basement.

To cut things short the influence of the warpstone drove his family insane and caused them to start to mutate so in the campaign the place is essentially shunned and the family and many of the servants have essentially become heavily mutated lunatic shut-ins doing all kinds of horrible stuff to whomever they get their hands on. As per the lore piece in Vermintide the adventurers saving the Empire in 2512 IC in “Enemy Within” have already cleared out Castle Wittgenstein once but left for the Pactsworn to move in since then.

Thus I think, if the expansion does indeed have three maps as seems to be the most expected number, that one map will be in Wittgendorf, one in Castle Wittgenstein and that there’s a reason which then leads the Ü5 to the Chaos Wastes for a final showdown with whoever it is that’s been doing naughty stuff and then presumably fled north, probably through a portal. Just because we will go to the Chaos Wastes in the expansion does not mean every map will be set there, after all.

Creatures of the Chaos Wastes

And another thing that I would comment on is the presence of certain monsters in the Warriors of Chaos Armybook for the 8th edition. Its my belief that we’ll either get a new monster for Chaos or that the final end event will be against some horrifically mutated Chaos creature, more animal than sentinent, instead of another humanoid lord from the Rotbloods or Clan Fester.

My favorites for what could be included are the following three. 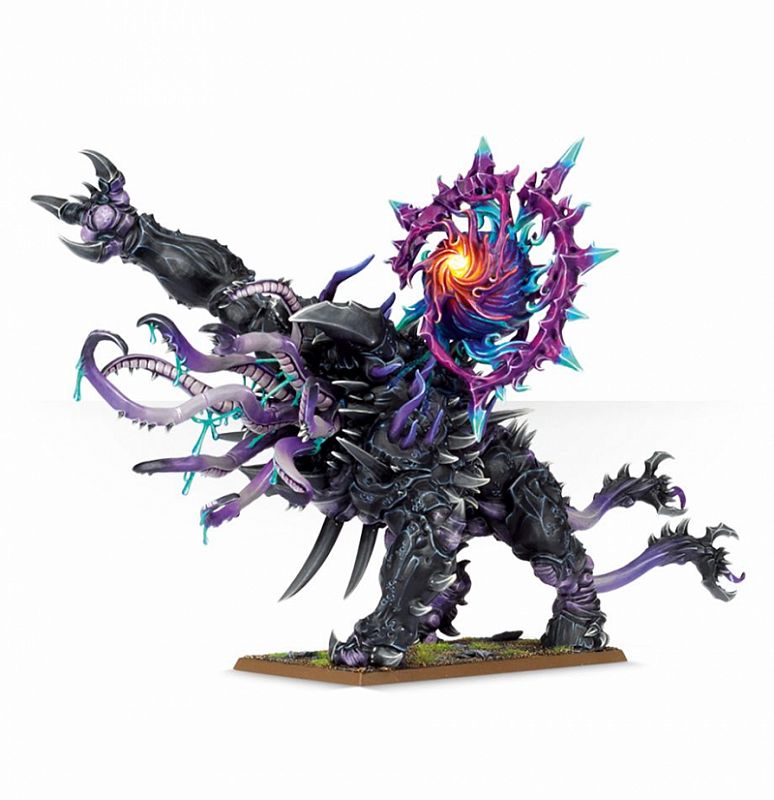 A Mutalith Vortex Beast is an utter abomination of nature. It is a terrifying fusion of monster and magic, a creature mutated beyond all reason by the powers of Chaos. In battle, a Mutalith's tentacles smash into the ranks of the foe. Those not flung... 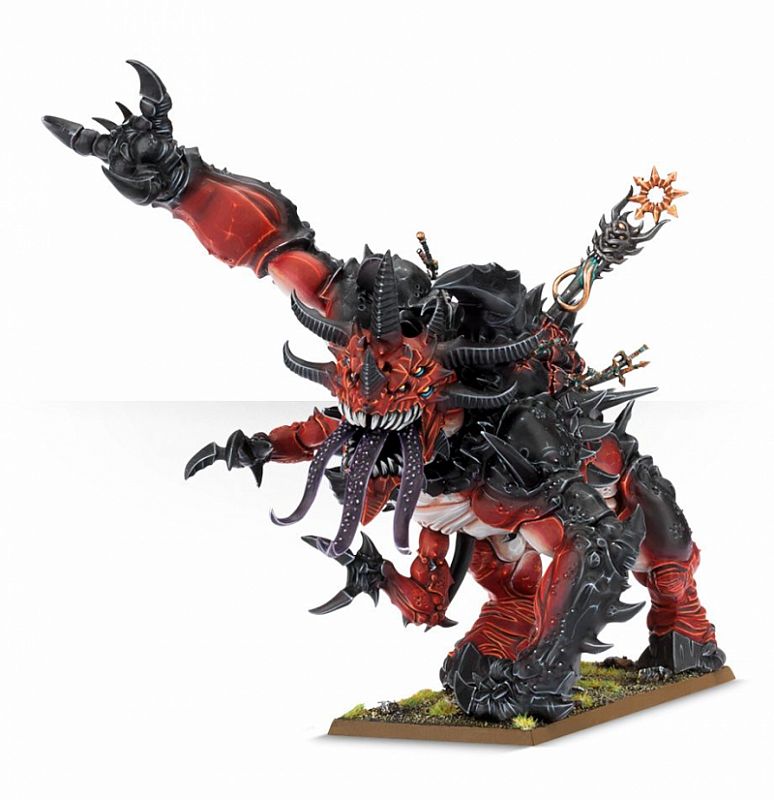 A Slaughterbrute is a hulking monster of muscle and aggression. Such a creature cannot be broken by conventional means, and those foolish enough to try are torn apart and eaten for their efforts. Instead, a Slaughterbrute's mind is enslaved, through... 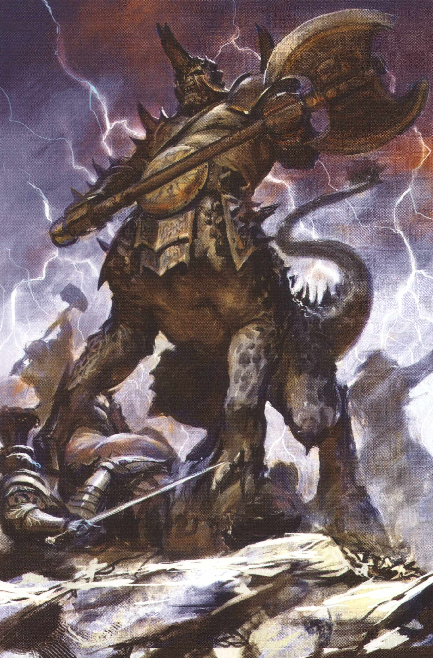 Dragon Ogres are amongst the most ancient of the world's living creatures. They are servants of the Ruinous Powers and resemble nothing so much as the upper torso and head of an Ogre fused with the lower body of a dragon, hence the name. It is not...

Were Daemon confirmed ? Some people were saying on reddit that they were not confirmed

Other Unit that could arrive from the Chaos Waste DLC would be:
Nurgling

Nurglings are the very image of Father Nurgle himself, having friendly, mischievous faces and bloated, green bodies fitted with disproportionate limbs. The only difference is their size. A Nurgling is no taller than a foot high. These foul things...


Would be a horde enemy (Like the Slave Rat)
Pestigor

Plaguebearers, known also as the Tainted Ones, the One-Eyed Rotters, Horned Rotbags, Maggotkin, Rotbearers and the Tallymen of Plagues, are the rank and file of Nurgle’s legions, crafted from the soul-stuff of mortals who have been slain by Nurgle's...

If they introduce Dragon Ogre or other quadruped monstrous unit, we could have the Razorgor as the 2nd Beastmen Monster

Given it’s being called the Chaos Wastes DLC, at least for now, it’d be pretty disappointing to have it set in the Empire Heartland for 2/3 of the new levels. I’d be perfectly happy to have that setting for a third expansion but not for this one. An insane asylum would be a good setting as well but that’s besides the point

I was thinking more along the lines of starting in Ostland or Kislev, then into Troll Country and finally Norsca. Or just go through another portal straight into Norsca and have the Ubersreik 4 or 5 tasked with getting back to the Empire over the course of all 3 levels. Maybe after the final boss you have to survive until you can prepare another portal or a ship to sail back.

A hidden level like fortunes of war, but this time truly endless, would be a great addition as well

Is that the official name ? I though it wasn’t released yet and people were naming it like that because of the location being confirmed to be in the Chaos Waste

With things looking rosier—or as rosy as a game about chopping up waves of monsters in gloomy medieval streets can be—Fatshark’s planning a new expansion. It’s called The Chaos Wastes and it’s coming at the end of the year.

What if the expansion isn’t just standard maps? I was kind of hoping for some mega-maps, with potentially more of an open feel to them so they are less linear.

edit: I guess that’s also sort of hinted at in the article.

Expect new maps, of course, and a location that will be a big departure from the existing battlefields.

“Mega maps”? Curious what you mean by this

Just much bigger and more sprawling, not necessarily big open fields. Multiple objectives to finish on a map and stuff, maybe you can complete more of them for increased rewards if you can make it out.

^ While I’d love for the Vermintide experience to take us to larger maps that are somehow connected (like a city and surrounding areas filled with an active conflict), I don’t think the game engine allows for this. I mean we can’t even get loadout boxes at the start of levels anymore because it caused problems…

Is there a date for the Chaos Waste DLC ? Or do they said nothing about it since the first interview ?

@Slayerkin Interesting bits of lore, thank you.
By the way, Death on the reik was also the name of VT1 last piece of DLC, where the U5 travelled through Wittgendorf (razed by the skaven) in order to find some books that have been stolen from Lohner, it might be the ingame references came from that, i’m not sure.
Halescourge was the one that ordered the theft, and the thief was on his way to Norsca. He’s been stabbed in the back and the ship wrecked. I never understood why the skaven were in hot pursuit, since the pact with Halescourge was signed in a previous DLC - Stromdorf - but maybe it was a different skaven clan or something.

By the way, Death on the reik was also the name of VT1 last piece of DLC, where the U5 travelled through Wittgendorf (razed by the skaven) in order to find some books that have been stolen from Lohner, it might be the ingame references came from that, i’m not sure.
Halescourge was the one that ordered the theft, and the thief was on his way to Norsca. He’s been stabbed in the back and the ship wrecked. I never understood why the skaven were in hot pursuit, since the pact with Halescourge was signed in a previous DLC - Stromdorf - but maybe it was a different skaven clan or something.

Hm, I didn’t recall that Wittgendorf was part of that map. So that might of course have been the reason for its inclusion in the lore reference. Thanks for the info!

But in regards to the hit I have no doubt it was Clan Fester that did that hit.

Backstabbing and treason is second nature to the Skaven, by the lore, and so its totally in character for them to first sign a treaty with a party, then do this hit just because they saw a chance for it, and then continue with the alliance. In fact I don’t even think the Skaven would consider it a treason but just “playing the game”.

It could of course have been another Skaven clan, but it don’t need to have been such.

Yeah that is true, it just felt weird having to fight tons of rats when they’d have just as easily gotten the books by doing nothing XD

Who would have gotten the books?

Halescourge, which is the emissary who personally signed the pact in Stromdorf

He presumably could, but it might have been risky for himself to enter the Red Moon Inn.

Why not send a disposable thug to do the dirty and dangerous undercover work and not risk getting cornered by Oleysia, Lohner and the Ü5 while trying to steal the books, or wait at a meeting place which his underling could reveal if caught?

Yes, that’s not what I meant, I meant that the skaven would have likely reaped the benefits of getting the books by just waiting, considering the pact with Halescourge. As you say, their treacherous nature explains their attack, but it feels a bit unnecessary to me, that’s all.

True indeed. I will admit that I don’t have any great explination for this part of the plot.